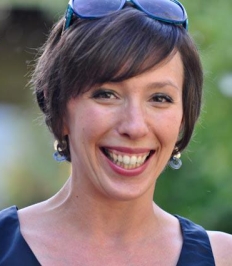 As the Assistant Director for Research & Publications at CPD until May 2014, Naomi was responsible for managing all aspects of the Center's research and publications programs. She oversaw the CPD Perspectives on Public Diplomacy – a monograph series written by CPD staff, fellows, visiting scholars and practitioners showcasing critical thinking about the study and practice of public diplomacy. Naomi managed the CPD Blog, our PD News (formerly PDiN) aggregation team, as well as the CPD Monitor, a review and analysis of current public diplomacy news. She facilitated the work of the Center's non-resident research fellows and their corresponding public diplomacy research projects.

Naomi received her Master of Public Diplomacy (MPD) from the University of Southern California's Annenberg School for Communication and the School of International Relations. She integrated her many interests related to public diplomacy by focusing her regional studies on Latin America and the Mediterranean along with issues pertaining to policy, security and international trade. She values the impact that individuals, as well as the new media and technology, have on public diplomacy — which she has experienced first hand by living and traveling throughout the Mediterranean and Southeast Asian regions.

Prior to her arrival at USC, Naomi worked for a retired U.S. Ambassador, served as the International and Government Relations Manager of the Specialty Equipment Market Association (SEMA) in Washington, DC and spent a year in Tel Aviv, Israel working as a counter-terrorism research intern at the Institute for National Security Studies (INSS). She received her BA in International Studies from the American University in Washington, D.C. in 2005. She concentrated her studies on the Mediterranean region, international law, intercultural communications and peace and conflict resolution.

Naomi is Founder & COO of www.Jewcer.com, a Jewish crowdfunding consultancy offering the platform, the strategy, and the ongoing mentorship needed for successful crowdfunding. Naomi currently sits on the Los Angeles World Affairs Council Young Professionals board and is a Contributing Analyst for Wikistrat. Naomi has working knoweldge of French, Hebrew and Spanish.