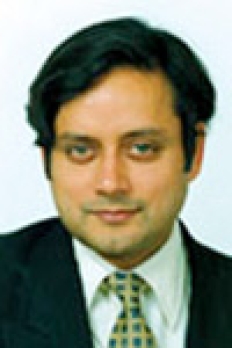 Dr. Tharoor is also the award-winning author of nine books, as well as hundreds of articles, op-eds and book reviews in a wide range of publications, including the New York Times, the Washington Post, the Los Angeles Times, the International Herald Tribune, Time, Newsweek and The Times of India. He has served for two years as a Contributing Editor and occasional columnist for Newsweek International. Since April 2001 he has authored a fortnightly column in The Hindu and since January 2007 in The Times of India.

His six non-fiction books include: Reasons of State (1981), a study of Indian foreign-policy making; India: From Midnight to the Millennium (1997), which was cited by President Clinton in his address to the Indian Parliament; Nehru: The Invention of India (2003), a biography of India's first Prime Minister, and a collection of literary essays, Bookless in Baghdad (2005). His three novels are the classic, The Great Indian Novel (1989) which is required reading in several courses on post-colonial literature; Riot (2001), a searing examination of Hindu-Muslim violence in contemporary India, and Show Business (1992) which received a front-page accolade in the New York Times Book Review and has since been made into a motion picture, "Bollywood". His most recent book, The Elephant, the Tiger, & the Cell Phone India: The Emerging 21st-Century Power (2007) which highlights why India has moved from a largely impoverished, underdeveloped country to a bustling, innovative, fast-changing society over the past 25 years. Shashi Tharoor’s books have been translated into French, German, Italian, Malayalam, Marathi, Polish, Romanian, Russian and Spanish.

Born in London in 1956, Dr. Tharoor was educated in India and the United States, completing a Ph. D. in 1978 at the Fletcher School of Law and Diplomacy at Tufts University, where he received the Robert B. Stewart Prize for Best Student. At Fletcher, Shashi Tharoor helped found and was the first Editor of the Fletcher Forum of International Affairs, a journal now in its 31st year. A compelling and effective speaker, he is fluent in English and French.

In January 1998, Dr. Tharoor was named a "Global Leader of Tomorrow" by the World Economic Forum in Davos, Switzerland. He is the recipient of several awards, including a Commonwealth Writers’ Prize, and was named to India’s highest honour for Overseas Indians, the Pravasi Bharatiya Samman, in 2004. He serves on the Board of Overseers of the Fletcher School of Law and Diplomacy, the board of trustees of the Aspen Institute India, and the Advisory Boards of the World Policy Journal, the Virtue Foundation and the human rights organization Breakthrough. He is also a Fellow of the New York Institute of the Humanities.

He is married to Christa, a Canadian who is Deputy Secretary of the United Nations Disarmament Commission, and is the father of twin sons Ishaan and Kanishk.

May 26, 2009 - <a target="_blank" href="https://uscpublicdiplomacy.org/%3Ca%20href%3D"http://www.huffingtonpost.com/shashi-tharoor/indian-strategic-power-so_b_207785.html>Indian">http://www.huffingtonpost.com/shashi-tharoor/indian-strategic-power-so_b... Strategic Power: Soft The Huffington Post

May 18, 2009 - The Hindu Times reports that CPD Fellow, Shashi Tharoor, has been elected to the Lok Sabha from Thiruvananthapuram.