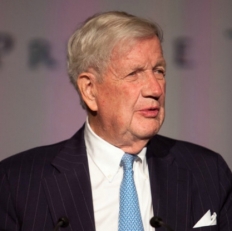 Ambassador William H. Luers is director of the Iran Project, a non-governmental organization that seeks to improve official contacts between the United States and Iranian governments and an Adjunct Professor in SIPA at Columbia University and in The Whitehead School at Seton Hall University. In 2009, he stepped down after serving ten years as President and CEO of the United Nations Association of the USA (UNA-USA), the nation's largest grassroots foreign policy organization, and leading center of policy research and public outreach on the United Nations and multilateral issues. Prior to joining UNA-USA in February 1999, Ambassador Luers served for 13 years as President of The Metropolitan Museum of Art, New York City. He serves as a member of the USC Center on Public Diplomacy's Advisory Board where he was the founding chair from 2004-2012.

Prior to his move to New York in 1986, Ambassador Luers had a 31-year career in the Foreign Service. He served as U.S. Ambassador to Czechoslovakia (1983-1986) and Venezuela (1978-1982) and held numerous posts in Italy, Germany, the Soviet Union, and in the Department of State, where he was Deputy Assistant Secretary of State for Europe (1977-1978) and for Inter-American Affairs (1975-1977). Ambassador Luers has been a visiting lecturer at the Woodrow Wilson School at Princeton, at George Washington University in Washington, D.C., and at the School of Advanced International Studies at Johns Hopkins University. He was also the Director's Visitor at Princeton's Institute for Advanced Study in 1982-1983.

An active member of the Council on Foreign Relations and other public policy organizations, Ambassador Luers serves on a number of corporate and non-profit boards, including the Rockefeller Brothers Fund, The East-West Institute, and the Howard Gilman Foundation. He speaks on foreign affairs, diplomacy, the U.N., and the arts around the world, and has been widely published on foreign policy issues. He is fluent in Russian, Spanish, and Italian.

Ambassador Luers is married to Wendy Woods Luers, Founder and President of The Foundation for Civil Society. He has four children and two stepchildren.