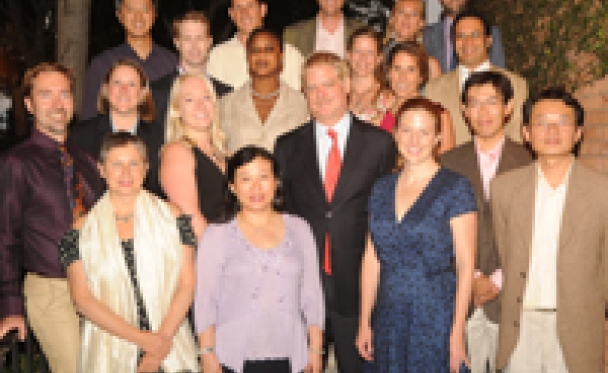 The USC Center on Public Diplomacy held its 2008 Summer Institute in Advanced Public Diplomacy from July 20 to August 1, 2008. In its third year, the Summer Institute is an intensive two-week course designed to immerse participants into the increasingly critical study of public diplomacy by combining traditional classroom instruction with collaborative hands-on exercises.
This exclusive training program, designed for mid-career professionals and graduate level students, has garnered global attention and continues to attract participants of the highest caliber with experience in fields related to traditional diplomacy, foreign and economic affairs, defense and homeland security, intergovernmental organizations, and the private sector.

Led by Nicholas Cull, Professor and Director of the Master of Public Diplomacy program at USC and Eytan Gilboa, Professor of International Communication at Bar-Ilan University in Israel, the Summer Institute in Advanced Public Diplomacy brings together some of the world’s foremost public diplomacy experts from a wide range of disciplines to offer an unparalleled level of instruction. Additional professors include Philip Seib, CPD University Fellow and Professor at the USC Annenberg School of Journalism, who specializes in international news coverage, media ethics and new technologies and Kelton Rhoads, Adjunct Professor of Communication and Psychology at the USC Annenberg School for Communication with a focus on influence and persuasion studies.
The 2008 program also featured special guest lectures from local and national experts including Nicholas Goldberg, Op-Ed Editor for the Los Angeles Times; Dean Garfield, Vice President at the Motion Picture Association of America; Abiodun Williams, Vice President of the Center for Conflict Analysis and Prevention at the US Institute of Peace; and Gillian Sorensen, Senior Advisor and National Advocate at the United Nations Foundation.

Participants in the 2008 Summer Institute in Advanced Public Diplomacy included: