On Wednesday, Nov. 16, Barber led an open discussion with students at the Center on Public Diplomacy office.

On Thursday, November 17 at noon, Benjamin Barber delivered a talk to the Annenberg School for Communication on the relationship of commercial branding to democratic values. Barber traced the development of the notion of branding, from early 20th century capitalists through the development of the trademark to contempory notions of branding and brand identity strategies. The branding ethic that dominates the current late-capitalist economy, Barber argued, has potentially depleted the values endemic to what Barber called "public liberties" necessary for democracy. Barber also discussed the implications of branding for crafting public diplomacy campaigns for the United States. Professor Barber's speech reflected arguments from his forthcoming book Consumed: The Decline of Capitalism and in the Infantilist Ethos.

Benjamin R. Barber is the Gershon and Carol Kekst Professor of Civil Society, Distinguished University Professor at the University of Maryland and a principal of the Democracy Collaborative, with offices in New York and Maryland. He also recently joined the USC Center on Public Diplomacy as a Senior Fellow. 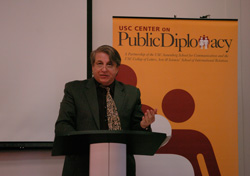 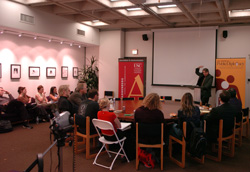 Ben Barber is giving his speech to faculty and students.