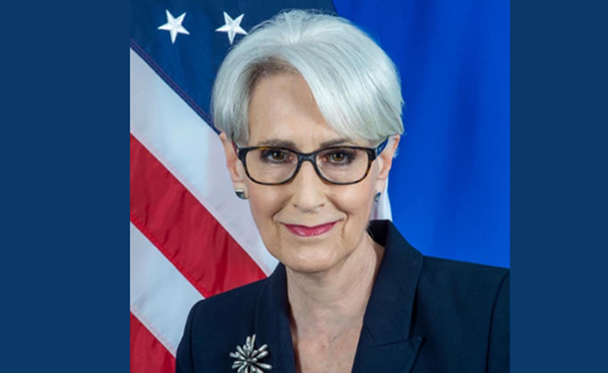 A Conversation with Wendy Sherman, U.S. Deputy Secretary of State

The nation’s number-two diplomat, Deputy Secretary of State Wendy Sherman has circumnavigated the globe twice since being sworn in this April. In July, she was the first senior Biden-Harris administration official to visit the People’s Republic of China for wide-ranging diplomatic talks. On September 2, 2021, Deputy Secretary Sherman spoke about her travels and shared insights into the Biden-Harris administration’s Indo-Pacific strategy, challenges in Afghanistan, and next-generation leadership in public diplomacy. Following her remarks, the Deputy Secretary was joined in conversation by Willow Bay, Dean of the USC Annenberg School for Communication and Journalism.

Wendy R. Sherman was confirmed by the Senate on April 13, 2021 and sworn in as the 21st and first female Deputy Secretary of State on April 14, 2021. Prior to assuming this position, Deputy Secretary Sherman was professor of the practice of public leadership and director of the Center for Public Leadership at the Harvard Kennedy School. She was also a Senior Fellow at the School’s Belfer Center for Science and International Affairs, and a Senior Counselor at Albright Stonebridge Group.

From 2011–2015, Deputy Secretary Sherman served as Under Secretary of State for Political Affairs, where she traveled to 54 countries and led the U.S. negotiating team that reached agreement on a Joint Comprehensive Plan of Action between the P5+1, the European Union and Iran for which, among other diplomatic accomplishments, she was awarded the National Security Medal by President Barack Obama. She previously served at the State Department as Counselor under Secretary Madeleine Albright, as Special Advisor to President Clinton and Policy Coordinator on North Korea, and as Assistant Secretary for Legislative Affairs under Secretary Warren Christopher. She also previously served on the President’s Intelligence Advisory Board, was Chair of the Board of Directors of Oxfam America, and served on the U.S. Department of Defense’s Defense Policy Board and Congressional Commission on the Prevention of Weapons of Mass Destruction, Proliferation and Terrorism.

A broadcast journalist, media pioneer and digital communication leader, Willow Bay is dean of the Annenberg School for Communication and Journalism at the University of Southern California. With a relentless commitment to students, Bay has increased scholarship opportunities, launched the state-of-the-art Annenberg Media Center, accelerated curricular innovations and vastly expanded the school’s partnerships with key media and technology partners. Prior to joining USC, Bay was co-anchor of CNN’s Moneyline, a reporter and anchor for ABC News’ Good Morning America/Sunday, a correspondent for World News Weekend, and a senior editor and strategic adviser at The Huffington Post.