Home|The Future of Southeastern Europe: The Role of Greece

The Future of Southeastern Europe: The Role of Greece 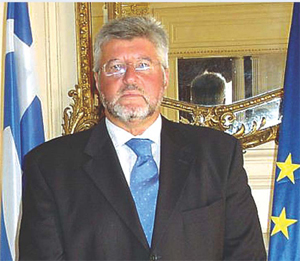 The University of Southern California's Center on Public Diplomacy proudly presented Greek Ambassador to the U.S. Alexandros Mallias for a discussion on the role of Greece in the future of Southeastern Europe.

Greece's experience shows that "there is nothing stronger, nothing more important, and nothing more rewarding as a means of national accomplishment than membership in the European Union," Greek Ambassador to the United States Alexandro Mallias said last Wednesday.

Mallias spoke at the University of Southern California about the future of Southeastern Europe, emphasizing the importance of the EU, energy resources in the area, and the final status of Kosovo in contributing to the growth and stability of the region.

Both Romania and Bulgaria are now members of the EU, making it a 27-member organization. But Mallias said that there are "many other countries in our neighborhood who are still waiting for a green light."

Mallias said Greece hopes to engage both its Balkan neighbors and Turkey with the EU. He said the EU's expansion would only make it a stronger and more credible union, but he also stressed the importance of countries such as Turkey meeting specific criteria before becoming members.

Turkey's inclusion in the EU has been controversial because of its refusal to recognize the government of Cyprus, and its continued occupation of the northern part of the island. But Mallias said Turkey needs to accept Cyprus' status as an independent member of the EU; it's a reality that is not going to change, he said.

The ambassador spoke about the prominence of the EU and the ways in which the organization is capable of affecting with whom a country trades. He also stressed the importance of the energy market in the area. He cited fresh investment in the field of energy in the Balkans as crucial and said the No. 1 issue for Greece and the U.S. is the global, secure transportation of energy; that priority, he said, if attended to, would help stabilize southeastern Europe in terms of both its economy and politics.

In addition to EU status and the energy market, Mallias referred to the final status of Kosovo as an issue that is critical for the region. Kosovo, an area where the majority of the population is composed of Muslim Albanians and the minority is Christian Serbs, has remained under U.N. watch since NATO bombing in 1999 ended a sweep of ethnic cleansing headed by former Serbian President Slobodan Milosevic.

The decision as to whether or not Kosovo should remain part of Serbia or gain independence is yet to be made, but Mallias said, "What we want to see, what we expect to see, is a situation without winners and losers." He went on to speak about the desire not to see Kosovo annexed but also to see Serbia move faster toward incorporation into the EU.

He ended by saying that that there was no longer room for a country’s policies to be guided by religious preferences or a division between East and West. Such policy- making strategies, he said, are "condemned to fail."