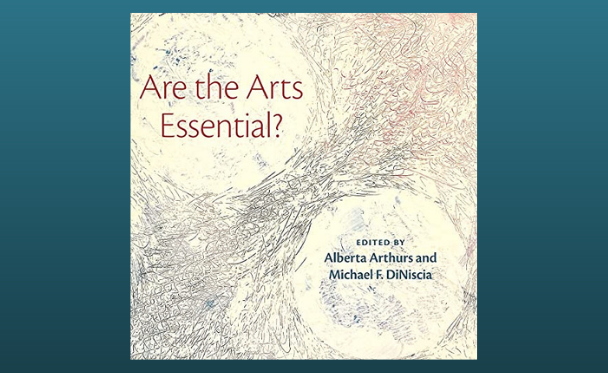 Are the Arts Essential?

Are the Arts Essential?, edited by Alberta Arthurs and Michael DiNiscia, provides a timely and kaleidoscopic reflection on the importance of the arts in our society. Join contributors Steven Tepper (Dean, Herberger Institute for Design and the Arts, ASU), Zeyba Rahman (Senior Program Officer, Doris Duke Foundation for Islamic Art) and Jay Wang (Director, USC Center on Public Diplomacy) in a conversation and Q&A around this vital question moderated by Karen Ishizuka (Chief Curator, JANM). This panel will explore the needs of an increasingly diverse and global society and the role of the arts in nurturing a global mind.

In the midst of a devastating pandemic, as theaters, art galleries and museums, dance stages and concert halls shuttered their doors indefinitely and institutional funding for entertainment and culture evaporated almost overnight, a cohort of highly acclaimed scholars, artists, cultural critics and a journalist sat down to ponder an urgent question: are the arts essential?

Across 25 highly engaging essays, these luminaries join together to address this question and to share their own ideas, experiences and ambitions for the arts. Topics include the vibrancy and diversity of Muslim culture in America during a time of rising Islamophobia; the strengthening of the common good through the art and cultural heritages of indigenous communities; digital data aggregation informing and influencing new art forms; and the jazz lyricisms of a theater piece inspired by a composer’s two-month coma.

Drawing on their experiences across the spectrum of the arts, from the performing and visual arts to poetry and literature, the contributors remind readers that the arts are everywhere and, in one important way after another, they question, charge and change us. These impassioned essays remind us of the human connections the arts can forge—how we find each other through the arts across the most difficult divides, and how the arts can offer hope in the most challenging times.

Karen L. Ishizuka is Chief Curator of the Japanese American National Museum (JANM), where she shapes the museum’s curatorial direction and agenda. Over her career at JANM, she has been a media producer and curator, as well as Director of the Frank H. Watase Media Arts Center. She curated the influential America’s Concentration Camps: Remembering the Japanese American Experience; established the museum’s Photographic and Moving Image Archive; and wrote and produced Toyo Miyatake: Infinite Shades of Gray, which was an official selection at the Sundance Film Festival. She received an M.A. in social work from San Diego State University and a Ph.D. in anthropology from the University of California, Los Angeles. In addition to numerous articles, she is author of the books Serve the People: Making Asian America in the Long Sixties and Lost & Found: Reclaiming the Japanese American Incarceration and coeditor of Mining the Home Movie: Excavations into Histories and Memories. In addition to her work at JANM, she serves as President of the Okura Mental Health Leadership Foundation.

Zeyba Rahman joined the Doris Duke Foundation for Islamic Art, an extension of the Doris Duke Charitable Foundation, in 2013 as Senior Program Officer for the Building Bridges Program. Rahman manages the Building Bridges Program’s national grant-making to support projects that advance relationships and increase understanding between Muslims and their neighbors for mutual well-being. Before joining the foundation, Rahman led internationally and nationally recognized projects as a creative director/producer to promote understanding between diverse communities. The roles she has undertaken include Director, Asia and North America, Fes Festival of World Sacred Music in Morocco; Artistic Director, Arts Midwest’s Caravanserai: A Place Where Cultures Meet; Curator, BAM’s Mic Check Hip Hop; Creative Consultant, Public Programs, Metropolitan Museum of Art’s Arab Lands, Turkey, Iran, Central Asia and Later South Asia Galleries; Chief Curator, Alliance Francaise’s World Nomads Morocco Festival; Project Director, Mid Atlantic Arts Foundation’s Global Cultural Connections; and Senior Advisor, Muslim Voices Festival. She is an adviser to Artworks for Freedom, serves on the board of Grantmakers in the Arts and the steering committee for the Aga Khan Trust for Culture’s Music Awards, among others. Twice honored by New York City’s government, Rahman is the subject of television profiles as a global arts leader and one of four women featured in Women Lead the Way, authored by Linda Tarr-Whelan, former ambassador to the UN Commission on the Status of Women.

Steven Tepper is Dean and Director of the Herberger Institute for Design and the Arts and Professor at Arizona State University, the nation’s largest comprehensive design and arts school at a research university. He is a leading writer and speaker on U.S. cultural policy, and his work has fostered national discussions around topics of cultural engagement, creative work and careers, art and democracy, and the transformative possibilities of a 21st-century creative campus. He is the author of Not Here, Not Now, Not That! Protest over Art and Culture in America (2011) and co-editor of and contributing author to Engaging Art: The Next Great Transformation of America’s Cultural Life (2007). Prior to ASU, he was on the faculty at Vanderbilt University, where he was a chief architect of the Curb Center for Art, Enterprise and Public Policy, a national think tank for cultural policy and creativity.

Jay Wang is Director of the USC Center on Public Diplomacy and Associate Professor at the Annenberg School for Communication and Journalism, University of Southern California. A scholar and consultant in the fields of strategic communication and public diplomacy, he has published widely on the role of communication in the contemporary process of globalization. His books include Debating Public Diplomacy: Now and Next (as coeditor), Shaping China’s Global Imagination: Nation Branding at the World Expo, Soft Power in China: Public Diplomacy through Communication (as editor) and China’s Window on the World: TV News, Social Knowledge and International Spectacles (as co-author). He serves on the editorial board of the International Journal of Communication. He has previously taught at Purdue University and worked for the international consulting firm McKinsey & Company.