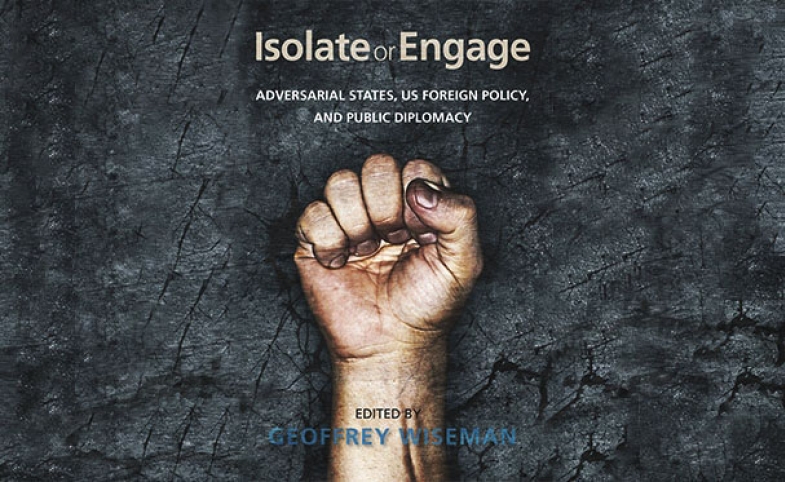 Dr. Geoffrey Wiseman is Professor of the Practice of International Relations and Public Diplomacy at the University of Southern California. He is a former Australian diplomat, serving in three diplomatic postings (Stockholm, Hanoi, and Brussels) and as private secretary to Foreign Minister Gareth Evans. Dr. Wiseman's most recent publication, Isolate or Engage: Adversarial States, US Foreign Policy, and Public Diplomacy, was recently published by Stanford University Press.

1) Why is Isolate or Engage crucial reading now?

The central premise of the book is that (short of war) governments have essentially two choices when dealing with adversarial states – isolate or engage them. We can use these two choices to frame possible responses to any number of foreign policy problems confronting the United States today: Russia's actions in Ukraine and Syria; China's ambiguous rise; North Korea's belligerent self-isolation; Vietnam's evolution as a regional player; Libya's internecine violence; Iran's observance of the 2015 nuclear agreement; the Syrian crisis; managing relations with post-Chavez Venezuela; and completing normalization of relations with Cuba.

So the question we tackle in this book is this: When the U.S. government decides to "isolate" the government of an adversarial state – manifested by the absence or limited presence of official diplomatic relations – how (and how effectively) does the United States go about seeking to engage that state’s public so that it will influence its own government to adopt less hostile and more favorable views of U.S. foreign policies specifically and of American society in general. In short, the book examines the public dimension of U.S. foreign policy and diplomacy in relation to states it considers adversarial.

The issues raised in the book are now (re-)surfacing in the presidential campaign. As Paul Richter reported in the Los Angeles Times a few days ago, some leading Republican presidential candidates are suggesting that the United States may need to tolerate repressive governments – a clear break from the neoconservative position that dictators should be overthrown (and from the liberal internationalist view that they might be persuaded or socialized to behave better).

2) Can you share an experience from your time as a diplomat that, for you, made the case for engagement?

When I worked at the Australian embassy in Hanoi in the early 1980s, there was no U.S. embassy in the Vietnamese capital, and this remained the case until 1995. It was clear that the Vietnamese Government wanted relations with the United States. However, the U.S.’s refusal to engage diplomatically with Vietnam for nearly two decades following the end of the war in 1975 meant that Washington had little reliable and consistent information on what was happening in the country. And that was at a time when big issues were at stake: the Vietnamese invasion of Cambodia, tens of thousands fleeing Vietnam by sea, and bitter relations between Vietnam and China following their border war. Many diplomats in the Hanoi diplomatic corps felt that the lack of U.S. diplomatic and other relations thwarted efforts to recover the remains of American servicemen missing in action from the war. With no American diplomats reporting from Hanoi and Ho Chi Minh City, Washington's knowledge of events in post-War Vietnam was skewed. As a general rule, having diplomats in an adversary's capital city is more likely to produce better information on the adversarial government's policies and on public attitudes in the country.

3) What is an example of popular discourse--such as a film or book--that you believe does a good job of demonstrating the effects of isolation or engagement on a country?

Ben Affleck's 2012 film Argo – about the rescue of six U.S. diplomats who had been sheltered by the Canadian ambassador, Ken Taylor, during the 1979 hostage crisis – does so in the sense that the CIA rescue was only possible because the Canadians decided at that time to keep their embassy in Tehran: to remain engaged, notwithstanding the new Iranian regime's outrageous support for the hostage-takers. Still, it has to be noted that the hostage crisis highlights one key problem of diplomatic engagement: that resident diplomatic missions offer a target for populist or terrorist attack, as we've seen in recent years.

4) Where are you seeing instances of effective citizen-to-citizen diplomacy between the U.S. and an adversarial state?

One clear example is given by William LeoGrande in his chapter on Cuba. He argues that people-to-people cultural and educational exchanges during the Clinton administration produced significant personal and institutional linkages between Cubans and Americans. LeoGrande also notes (in his recent book with Peter Kornbluh, Back Channel to Cuba) that the Obama administration has pushed such engagement as far as existing law allows as part of the current normalization process. There is considerable evidence that even limited people-to-people visits are having a positive impact in Cuba. In fact, Cuba represents a real-time test for how well many of the pro-engagement arguments made in the book will hold up in future.