Home|The Dubai Ports Controversy: An Uproar Heard Round the World

The Dubai Ports Controversy: An Uproar Heard Round the World

Dubai-based Dubai Ports World (DP World) announced its takeover of P & O, a British shipping and logistics company on February 13 to little fanfare.  Coverage of the $3.7 billion deal was restricted mainly to the business section of international news sources, if it was covered at all.  Almost none of these outlets made mention of the transfer of management of six U.S. ports from P&O to DP World included in the deal.  Only when Senator Charles Schumer spearheaded a high-profile campaign against the deal, did wide spread objections begin to surface.

To date, deal opponents have been mainly domestic. Most objections center on the national security considerations of surrendering control over U.S. ports to a company based in the United Arab Emirates.  Some suggest that an Arab world-based company is more prone to terrorist infiltrations while others are particularly troubled by the fact that the UAE government owns and operates DP World.  Still others highlight the fact that DP World’s Arab ownership is a secondary consideration and that the case highlights the need to bring all American ports back under domestic ownership.

Despite high levels of American popular support for such arguments, the political uproar over state-owned DP World’s planned takeover of the management of six American ports has sparked overwhelmingly negative reactions around the world.  Many characterize the controversy as strategic political posturing by US Congressmen involved.  Almost universally, journalists and political pundits alike have characterized the ports controversy as fundamentally detrimental to the United States image, and contradictory to American positioning as pro-trade, pro-globalized markets, pro-diversity, and pro-cooperation with Middle Eastern allies.

Allegations of nationalism, xenophobia, and general anti-Arabism abounded.  Claims of racism were particularly strong from Middle Eastern commentators.  Many editorials question why the American public so adamantly objects to the deal.  Many journalists and politicians—including President Bush—have expressed worry that American resistance to the ports deal will inhibit future peaceful economic and political cooperation by the United States with Middle Eastern allies.

However, the implications for the US economy has emerged as the dominant theme of the discourse surrounding the ports controversy, particularly after DP World decided to divest itself of the six American ports at the center of the conflict.  This decision shifted the center of concern from the implications for US-Arab collaboration and President Bush’s political vulnerability to more general speculation that the US may move towards a more protectionist and isolationist trading strategy. Most recent coverage has focused on the whether the ports controversy will initiate declines in international investment in the United States and detrimentally effect the American economy.

Jade Miller is a doctoral student in communication at the Annenberg School. Her research interests lie with global flows of information and culture. She is interested in globalization and development, and the economics of the play between local and global in the cultural industries in rapidly developing countries. Her research in public diplomacy has focused on relationships between the nation-state and its transnational corporations. She is also interested in the exporting of a nation’s cultural products and their subsequent reception abroad.

The Dubai Ports Controversy: An Uproar Heard Round the World
March 2006 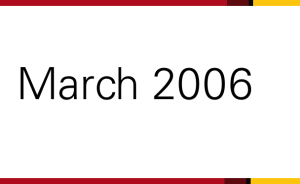