Home|Hezbollah, Israel, and the U.S.: A Conflict With Far-Reaching Implications

Hezbollah, Israel, and the U.S.: A Conflict With Far-Reaching Implications

The 33-day military confrontation between Hezbollah and Israel and the subsequent cease-fire and aid operation has important public diplomacy implications not only for the two warring parties but for many other state and non-state actors.  The conflict commanded the world’s attention.  Much more than a land dispute or run-of-the-mill cross-border antagonism, the conflict encapsulated, highlighted, and exacerbated many other strains in the region and in world politics at large, including the struggle of Lebanon’s newly elected government to control its territory, the ongoing Palestinian-Israeli conflict, Syrian and Iranian influence in Southern Lebanon through their support for Hezbollah, U.S. support for Israel, and associations with the U.S.-led war in Iraq.  The actions of each party associated with the Israel-Hezbollah conflict have been noticed around the world and linked to much larger trends.  The implications from this conflict for each actor are manifold.

Almost every nation in the world has a registered response to the Hezbollah – Israeli conflict.  Many nations criticized both Hezbollah’s and Israel’s actions, and called for a cease-fire.  However, many of these countries expressed their sympathies through emphasizing one criticism over the other.

The U.S. was at the forefront of those nations emphasizing Israel’s right to self-defense against Hezbollah.  Joining in on the pro-Israel side were allies in the “war on terror” such as the U.K., as well as some nations that were against the war in Iraq, such as Germany and Canada.

Most nations, save Syria and, to some extent, Iran, did not come out directly in support of Hezbollah, an extra-national organization regarded by some in part or in whole as a terrorist group. Countries typically associated with anti-Americanism, such as Venezuela and many Muslim nations such as Pakistan, Jordan, Egypt , Yemen, Kuwait,  Tajikistan, and, perhaps of particular interest, Iraq,  and Afghanistan, came out against Israel in this conflict by denouncing the IDF military campaign as overkill.  Many countries that were against the Iraq war, such as Spain, Russia, France and Italy have also heavily criticized Israeli conduct.

Following the mid-August cease-fire, Israel emerged enmeshed in negative international opinion from much of the world, but particularly in Muslim nations as a result of the conflict.  While many acknowledged Israel’s right to react in a militant fashion to Hezbollah’s initial hostilities, Israel’s response, particularly in regards to civilian casualties, was deemed by many as excessive, and the product of a joint American-Israeli policy of hostility towards Muslim nations.  Support and sympathy for Israel has been particularly strong in the U.S., however, where 81% of Americans reported believing that Israel’s offensive in Lebanon were justified and 37% believing that all Israeli military action was justified.

While not directly involved in the military operations in Southern Lebanon, the U.S. is undoubtedly considered one of the major players in the conflict and has much at stake here.  Across the world, the actions of Israel are closely linked with the image of the U.S., as a result of the U.S.‘s actions regarding this situation, general U.S. policy towards Israel, and a perception that the two countries are closely allied in world politics, sharing the same goals and techniques.  Many have accused the U.S. of purposefully dragging its feet in interceding in this conflict, in order to allow Israel more time to bombard Hezbollah.

Condemnation of Israel’s actions in this conflict has rarely been unaccompanied by condemnation of U.S. policy; the two have been conflated in the eyes of many bystanders. The idea that Israel’s actions are made possible because of the tacit approval of the U.S. means that any actions taken by the Israeli government could hardly be more associated with the U.S.  than if the U.S. had performed them itself.  Lebanese civilian deaths, widely documented in the Arab world, have reflected negatively not only on Israel, but on the U.S. as well.  Both the Bush administration’s slowness to respond to the military operations underway in southern Lebanon and its position in Iraq have led some onlookers to declare that the U.S. does not place high value on the deaths of Arab civilians.  The policies of the U.S. in the Middle East and the actions of the U.S. in Iraq have been very closely attached in public discourse to the actions of Israel in southern Lebanon.

Syria, on the other hand, emerged in many ways a winner in the public diplomacy war, as its power and dominance in the region has been highlighted by many.  The conflict has led many to suggest that the U.S. resume direct diplomatic relations with Syria, while commentators around the world (including President Bush in an accidental open-mike remark to Tony Blair) have suggested Syria as key to solving problems in the region.  Iran has been the focus of similar suggestions in the world press, yet the biggest public diplomacy winner in this conflict is surely Hezbollah.  Among private citizens across the world with anti-American or anti-Israeli sentiments (either as a result of this or other geopolitical conflicts), Hezbollah has emerged as an embodiment of resistance.  Traditionally a Shiite movement, even Sunnis across the region have expressed feelings of admiration for and even support for Hezbollah’s actions.  Reports from southern Lebanon indicate that support for Hezbollah has increased, particularly among those living in towns hit by the fighting .  Hezbollah has used its time on the forefront of the world stage to practice public diplomacy itself, raising its image among foreign publics while it remains an extra-national organization itself.  Most recently, Hezbollah has been seen at the forefront of aid dispersal in affected Lebanese areas

The following is an aggregation of media reports regarding the Hezbollah-Israeli conflict, focusing on issues important for public diplomacy. If you would like to post your reactions and ideas about this issue, you can add your comments at the bottom of this page.

Jade Miller is a doctoral student in communication at the Annenberg School. Her research interests lie with global flows of information and culture. She is interested in globalization and development, and the economics of the play between local and global in the cultural industries in rapidly developing countries. Her research in public diplomacy has focused on relationships between the nation-state and its transnational corporations. She is also interested in the exporting of a nation’s cultural products and their subsequent reception abroad.

Hezbollah, Israel, and the U.S.: A Conflict with Far-Reaching Implications
August 2006 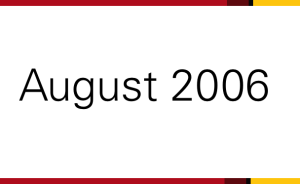