THE 10 BIGGEST PUBLIC DIPLOMACY STORIES OF 2013

1. Pope’s Global Outreach Spotlights Poverty and Inequality
Since the inauguration of Pope Francis in March 2013, the Vatican has been engaging with publics around the world by acknowledging local equality, economic, and development issues. The resulting shift in public perception of the Catholic Church continues to unfold.

2. Putin Embraces Soft Power, with Mixed Results
Russian President Vladimir Putin had a busy year of public diplomacy efforts, including addressing the American public through a New York Times op-ed and authorizing the release of activists imprisoned on charges of blasphemy. However, his efforts toward enhancing Russia’s soft power in the lead-up to the 2014 Sochi Winter Olympics have been undermined by his public stance against gay rights, which created negative fallout in much of the Western world.

3. Girl Power, Malala’s Quest for Education
16-year-old Malala Yousafzai survived an assassination attempt by the Taliban to become the youngest Nobel Peace Prize nominee in the award’s history. Yousafzai’s message of peace has made her an international symbol of survival and strength for young people, women, and others impressed by her resilience against all odds.

4. Brazil Leads the Charge Against the U.S. after Snowden Revelations
In the wake of Edward Snowden’s revelations about U.S. surveillance of other countries, Brazilian president Dilma Roussef condemned the United States’ actions in the strongest terms before the United Nations General Assembly. Roussef’s statement is representative of the tremendous hit the U.S. government’s image has taken across the globe.

5. Beyond Mandela, South Africa’s Global Icon Lives On
Nelson Mandela leaves behind a legacy of unity, reconciliation, and human rights activism. For South Africa, and more importantly, for global society as a whole, Mandela continues to inspire those who work for peace.

6. Kosovo is a Nation, according to Facebook
Facebook has added Kosovo, recognized as a nation by 103 countries, to its menu of home countries users can select for their profiles. By taking a stance and recognizing Kosovo, Facebook demonstrated the expanding global reach of social media companies and their growing agency in the international arena.

7. Newcomer Angola Takes Top Prize at Venice Biennale
In the first year of its involvement with the festival, Angola won the 55th Venice Biennale’s Gold Lion Award for best national participation. One of 88 countries in the running, Angola’s triumph emphasizes the strength of its cultural diplomacy and the rise of a truly global culture of art.

8. Muppet Diplomacy Goes to Kabul
Though the relationship between the U.S. and Afghanistan is far from perfect, the arrival of children’s television show Sesame Street signals a promising new chapter in U.S. cultural diplomacy in that nation. The Sesame Workshop has a programming presence in approximately 145 countries, now including its Baghch-e-Simsim program, designed specifically for Afghan youth.

9. China’s First Lady Makes Her Debut on the World Stage
Chinese first lady Peng Liyuan, a beloved folk singer, accompanies her husband on high-profile state visits. Peng’s public image is a component both of China’s tremendous push to promote its own soft power abroad and to improve relations with citizens at home.

10. Dubai Set to Host the First World Expo in the Middle East
Dubai’s winning bid to host the 2020 World Expo makes the U.A.E. the first Middle Eastern nation to receive this honor. Dubai is expected to receive the most international visitors in the history of the World’s Fair. 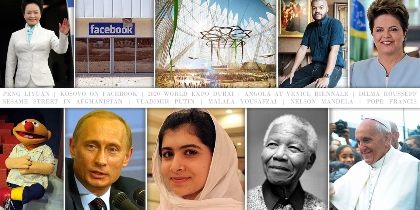 Other notable stories include:

“Engaging foreign publics is now essential to a nation’s international relations,” said Jay Wang, director of CPD. “This year’s leading stories represent a wide spectrum of PD practices, from policy communication and national projection, to cultural diplomacy and global advocacy. They also demonstrate that PD is not only global in nature but involves a multitude of actors and networks.”

In February, CPD will publish the first Annual Review of Public Diplomacy, a full report and analysis of last year’s trends and what to expect for 2014.

METHODOLOGY
CPD, on a daily basis, aggregates English-language public diplomacy (PD) news stories from around the world. This year, we collected more than 1,500 stories. To select the top 10 we convened a panel of international public diplomacy experts and asked each to choose the most significant public diplomacy stories of 2013 from a list of 50. From the panelists’ choices we ranked the top 10 stories based on the number of votes, comments, and global PD significance.

To narrow our list of 1,500 stories to 50, we took into account the following factors: the frequency of the story being covered in various news sources, the implications of the public diplomacy event, the credibility of sources publishing the news about the PD moment, and the frequency of an actor’s participation in public diplomacy activities either as the initiator or receiver of public diplomacy. The CPD staff then reviewed the stories to ensure that the full spectrum of PD content across the broadest geographical regions was represented and that they included cultural, governmental, soft power and non-state activities.