March 13, 2009 -- The USC Center on Public Diplomacy at the Annenberg School is proud to announce the publication of Public Diplomacy, Cultural Interventions & the Peace Process in Northern Ireland: Track Two to Peace? edited by Joseph Popiolkowski and Nicholas J. Cull.

The collection of essays published in this book coincide with yet another defining moment in the province's history: The killings of two British soldiers and a police officer in Northern Ireland by an extremist Irish Republican fringe group on March 9, 2009 has served to unite the territory's Catholic and Protestant communities to an unprecedented degree. The peace-building lessons in this book could not be more relevant to the people of Northern Ireland or to the wider world than they are today.

Written by a mix of scholars, practitioners and witnesses to the peace process in Northern Ireland, and based on a May 2007 conference hosted by the USC Center on Public Diplomacy, the essays in this collection fall within one or more of the overlapping circles covered by the terms public diplomacy, Track Two diplomacy, and conflict resolution. "This publication is a major contribution to the growing field of Track Two diplomacy studies" said Geoffrey Wiseman, Director of the USC Center on Public Diplomacy. "The essays collected here provide important lessons and guidance specific to the context of Northern Ireland but which are equally applicable to conflict zones around the globe." 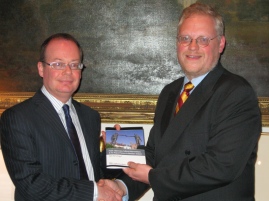 Co-editor Joseph Popiolkowski -- a journalist and graduate of the USC Masters Program in Public Diplomacy -- paid tribute to the distinguished contributors to the volume and to the sponsors of the original conference, who in addition to the Center on Public Diplomacy included the British Consulate General in Los Angeles, the British Council's Think Tank, Counterpoint, the USC Center for International Studies, the USC Religion and Identity in Global Governance project and the USC Knight Chair in Media and Religion. "This venture was very much conceived in the spirit of inter-campus and cross-national collaboration," said Popiolkowski.

To read the publication online, click here. To request a copy of the printed book, please contact the USC Center on Public Diplomacy at cpd@usc.edu.