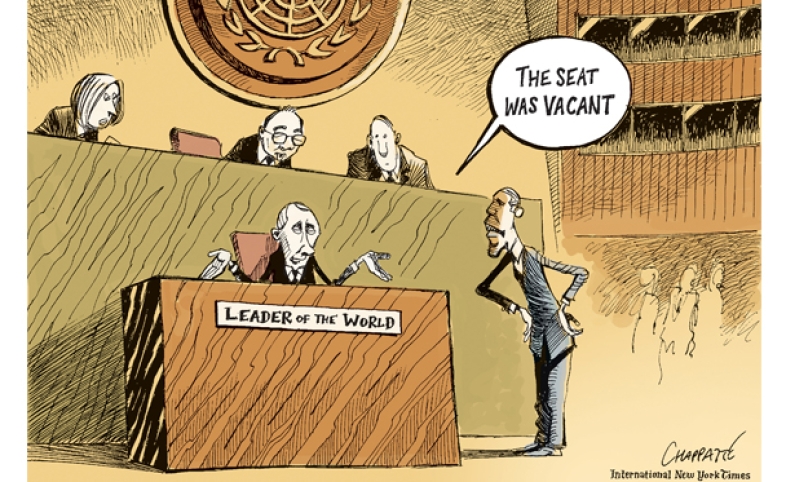 Patrick Chappatte is an editorial cartoonist for the International New York Times. His most recent collection of cartoons, "Slow Burn" (Globe Cartoon), was published in 2014. You can find samples of Chappatte's work here, and watch his TED talk on "The Power of Cartoons" here. In light of the role political cartoons have played in international crises, such as the January, 2015 attack on France's Charlie Hebdo offices, and the ensuing public diplomacy crises, CPD asked Chappatte about communicating with foreign publics through the medium of cartoons.

What are political cartoons able to convey that another medium, such as a written op-ed, cannot?

There’s a popular saying that “a cartoon is worth a thousand words.” A cartoon is first and foremost an image, which is both its force and its limitation. What makes an image powerful is that it short circuits reasoning. It’s a shortcut: you take it in the face before you have time to understand it. It's a language that doesn’t need translation. The downside of this: a cartoon can be ambiguous, open to different interpretations - and misunderstandings, as we have seen with recent global cartoon controversies. There’s not much room for nuance in a political cartoon: you have two seconds to make your point. That's the reason why we often need a thousand words, in addition to good cartoons.

What are some common critiques you hear of political cartoonists' work, particularly those who address international issues? How do you respond to those critiques?

Some readers might question where you come from, your understanding of a situation, and your legitimacy to address it. In the years of the Balkan wars, I would hear things like “You’re not from Serbia, you can’t understand anything about Serbia,” or after some particularly pointed cartoon about U.S. drone attacks or racial tensions in Baltimore, I would be invited to go back to Switzerland, my country of origin. When people react, most of the time it’s a good sign: it means that you hit a nerve. All societies need to be confronted with a view from the outside, it can help us see things more clearly. Outsiders have this candid approach to a reality we get used to. The cartoonist needs to be an outsider, even within his community. He must play the role of the little kid who points out that the king is naked, when everyone else in the kingdom is pretending otherwise.

Which countries have you found respond best to political cartoons, and which respond the least?

To work, humor needs a certain perimeter. It needs an audience with the same set of references. For sure, if you are from a given culture and you work locally, you will have better control over the implications of what you say and what you draw. And cartooning needs some freedom to flourish. The state of cartooning is, in fact, a good indicator of the level of democracy. In the Western world, the tradition of political satire has established itself side by side with the progress of democracy. In the context of authoritative regimes, cartoonists must find an oblique way to criticize the rulers, so they often resort to social satire and a coded language that readers understand. On top of that there are cultural factors. In many places in Asia, there’s that notion of not making someone “lose face,” which makes the job of caricature difficult. I know a fellow cartoonist from Singapore who excels in international affairs but can't draw about domestic affairs. Now when you draw for an international publication, like The International New York Times and nytimes.com, your audience is global, you address a “world elite” that shares the same set of references - and hopefully they get most of my jokes.

Which international political cartoonists do you believe are doing some of the best work today?

Not many of us fit this definition today. Editorial cartooning has followed the evolution of print media. As much as there’s been a growing offering of “international news channels” over the last few years, triggered by government-backed efforts to respond to the dominance of CNN and BBC, and to offer different narratives from a French, Chinese, or Russian perspective, there are not many newspapers left with an international ambition, and not all of them have a dedicated political cartoonist. A great cartoonist with an international reach is Kal, who has one foot on each side of the Atlantic, being the star cartoonist of both the Baltimore Sun and The Economist. Worldwide syndication allows American cartoonists to reach a large audience. A master of the genre is Pat Oliphant, an Australian who moved from Australia in 1964 to become, according to The New York Times, “the most influential editorial cartoonist now working." The list of cartoonists I admire would be long. That’s the beauty of this job: it’s always stimulating to see other people’s work.

The November edition of Bruce Gregory’s public diplomacy reading list is now available. Known affectionately at CPD as "Bruce's List," this list is a compilation of books, journal articles, papers and blogs on a wide variety...