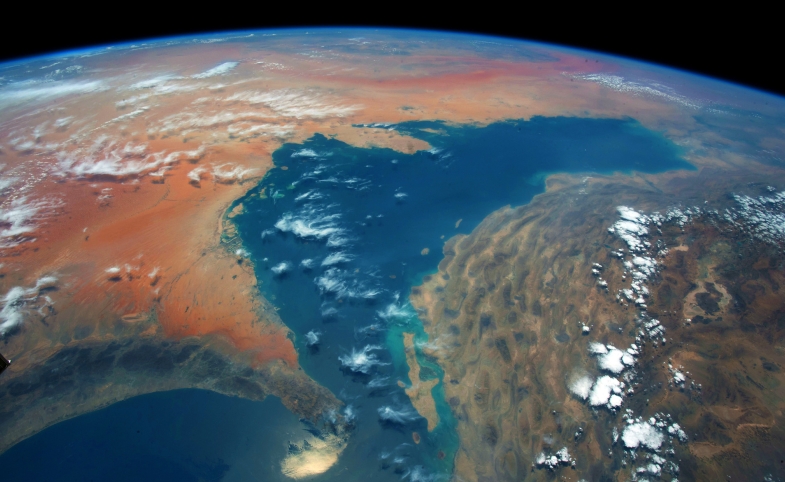 The Persian Gulf is one of the most populous and environmentally-sensitive regions in the world. Consequently, it is no surprise that Gulf states are increasingly dependent on desalination for their drinking water. But that dependence carries severe risks in a region as volatile as the Gulf has been, especially in light of recent tensions between the United States and Iran. Any accident or military conflict in the Gulf could cause massive spills of long-lasting contaminants such as crude oil or radioactive material into its waters, which could seriously threaten the lives and well-being of millions of people in the region.

Desalination in the Persian Gulf region has exploded in recent decades as governments have looked for ways to secure reliable water supplies. The Gulf is now home to the largest number of desalination plants in the world, with a total capacity of 11 million cubic meters per day—equivalent to nearly fifty percent of global daily desalinated water production.

Arab countries bordering the Persian Gulf heavily depend upon it for their drinking water needs. “Saudi Arabia, the UAE and Kuwait have the globe’s highest desalination capacities. According to the 2018 International Water Summit, the three Gulf Cooperation Council (GCC) countries alone are responsible for more than one-third of the global desalination capacity.” It has been projected that their water demands will increase by 50 percent by 2050. Almost all of these countries will have no other options for water besides the Persian Gulf.

Based on reviewing recent published reports, including one by the Gulf Research Center (2012), the contribution of seawater desalination in producing potable water for the Arab countries of the Persian Gulf includes:

This dependence takes on increased seriousness when we consider that these countries do not have beyond a few days’ consumption of drinking water safety stock storage capacity. Also, their desalination plants are highly vulnerable to military attacks, oil spills, and other seawater contamination, any of which could easily force their closure. For example, the Seki oil tanker incident in 1994 could have turned into a major disaster if the spilled oil had reached the intakes of the desalination plant in the emirate of Fujairah. Likewise, in July 1997, diesel fuel spilled from a grounded barge in the emirate of Sharjah, entered the intake of a desalination plant, and led to a major contamination of the water supply of an estimated half million people. This event left Sharjah without water for a day.

There are national security implications as well as humanitarian considerations surrounding the vulnerability of Gulf desalination plants. The potable water supply of the largest U.S. military base in the Middle East, Al Udeid air base in Qatar, home to some 11,000 U.S. military personnel, is also at risk.

Before the start of scorching summer months of July and August and for their own sake, these U.S. allies should immediately and urgently initiate and engage in vigorous diplomatic efforts to ease tensions with Iran.

If the current crisis in the Persian Gulf is not defused, then it could result in a runaway escalatory cycle of accidental or premeditated violence targeting military and civilian sites, and could cause an environmental catastrophe. Any shooting war in the Persian Gulf, even one that began as a so-called “low-intensity” conflict meant to punish Iran with a “bloody nose,” would risk escalation. As Winston Churchill said (in My Early Life, 1930):

Let us learn our lessons. Never, never, never believe any war will be smooth and easy, or that anyone who embarks on the strange voyage can measure the tides and hurricanes he will encounter… The Statesman who yields to war fever must realize that once the signal is given, he is no longer the master of policy but the slave of unforeseeable and uncontrollable events. Antiquated War Offices, weak, incompetent or arrogant Commanders, untrustworthy allies, hostile neutrals, malignant Fortune, ugly surprises, awful miscalculations – all take their seats at the Council Board on the morrow of a declaration of war… Always remember, however sure you are that you can easily win, that there would not be a war if the other man did not think that he also had a chance.

Donald Trump has threatened the “obliteration” of Iran in the event of a conflict, all but ensuring escalation. It is surely worth noting that, according to The New York Times, “senior officials” from both Saudi Arabia and the UAE have told U.S. Secretary of State Mike Pompeo “that they do not want a war with Iran…[and] In such a shooting war, the senior administration official said, those two countries would most likely bear the brunt of the repercussions.” It would seem that they are aware of the risks that war would pose to their own interests.

The ability of the people who live around the Persian Gulf to subsist depends on the availability of potable water. The sources of that water and their safety and security are interdependent and intertwined with the state of relations between the Arab Gulf states and their northern neighbor Iran. Iran’s two most influential Gulf antagonists, Saudi Arabia and the UAE, live in desalination glass houses and should be careful about throwing stones at Iran lest they invite the conflict they seem keen to avoid. Before the start of scorching summer months of July and August and for their own sake, these U.S. allies should immediately and urgently initiate and engage in vigorous diplomatic efforts to ease tensions with Iran.

Note from the CPD Blog Manager: This article was previously published here by LobeLog.