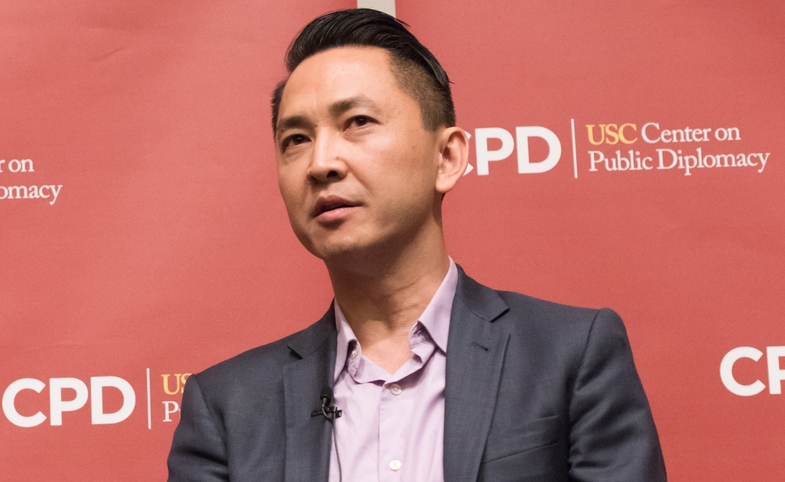 Viet Thanh Nguyen is Associate Professor of English and American Studies and Ethnicity at USC Dornsife College of Letters, Arts and Sciences. Dr. Nguyen is also a member of the steering committee for the Center for Transpacific Studies. He is the author of Race and Resistance: Literature and Politics in Asian America (Oxford University Press, 2002) and the novel The Sympathizer (Grove Atlantic, 2015). CPD asked him about his writing, diasporas, and the role of literature in the cultural imagination.

You're both a novelist and a scholar. How do your writing processes differ for novel writing and academic writing?

They don’t differ that much. Both involve research, then writing, followed by more research and writing. Both combine intuition and rational planning. I’ll make outlines or synopses, but I’ll depart from them as a project evolves. Both have their moments of inspiration, where the writing is easy, and drudgery, when the writing is painful.

As you were writing The Sympathizer, did you have an audience in mind? Were you writing for both Americans and Vietnamese audiences? For both those who were alive during the U.S.-Vietnam War and those who weren't?

My first audience was myself, which is not an answer most people (including my agent and editor) want to hear. But I felt that the novel I wanted to write would say things that I had not heard being said in American culture before. Of course, I hoped that Vietnamese, Vietnamese Americans, and Americans who remembered the war—as well as people who had no connection to the war—would also find what I had to say interesting.

The protagonist of The Sympathizer describes himself as having "two minds" and "two faces," and is ambivalent about whether this is an asset or a fault. Having been born in Vietnam and raised in America, do you identify with his split allegiances?

Absolutely. The novel is not autobiographical in fact, but it is to some extent autobiographical in ideas and feelings. I do feel that I am constantly negotiating between cultures and perspectives, which is both a strength and a weakness. Like my character, I can see things other people can’t, but like him, I also rarely feel at home.

What role do you see for literature in shaping cultural imagination?

Literature can be derivative and reflect the dominant cultural imagination, but it can also be disruptive and force people to see the world in new ways. Sometimes people want to have this happen, and sometimes they don’t. This speaks to the power of literature to give us pleasure by reassuring us, or to be provocative in making us uncomfortable.

Forty years after the war ended, how would you characterize mutual public perceptions of the U.S. and Vietnam?

Both Vietnam and the U.S. have new concerns and potential enemies. Or perhaps one shared concern and possible enemy, China. As a result, Vietnamese and American perceptions of each other are more positive than they were forty years ago, because these two countries are testing out what it means to be allies versus antagonists.

Photo by Dave Scavone for USC Center on Public Diplomacy

John Maxwell Hamilton is the Hopkins P. Breazeale Professor of Journalism in the Manship School of Mass Communication, Louisiana State University, and a global fellow at the Woodrow Wilson Center for International Scholars....