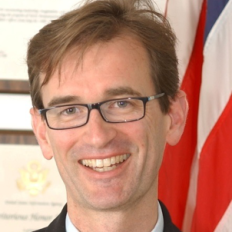 Philip Breeden is a public diplomacy advisor and educator based in France. He joined IAU in 2015 where he teaches international relations and U.S. foreign policy and coordinates public affairs. Previously, as a senior American diplomat, he spent almost three decades in the United States Foreign Service creating and directing communication, cultural and educational exchange programs in Europe, Africa and the Middle East. He also advises U.S. missions on public diplomacy issues and teaches at educational institutions such as SciencePo, Paris.

Philip Breeden joined the Foreign Service of the United States Information Agency in 1986. He served in Public Diplomacy positions in Ankara; Antananarivo; Istanbul; Washington, D.C.; London and Tunis before becoming the Consul General in Marseille in 2005 and the Press Counselor at the U.S. Embassy in London in 2008. From 2011 to 2014, Mr. Breeden was the Minister Counselor for Public Affairs at the U.S. Embassy in Paris.

Mr. Breeden received numerous awards including a Superior Honor Award for his public diplomacy efforts in Tunisia, the Palmes Académiques for his work with high schools in France, and the Secretary of State’s Career Achievement Award. He speaks French, Arabic and Turkish. He holds a B.A. in International Relations from Stanford University and a M.A.L.D. from the Fletcher School of Law and Diplomacy.