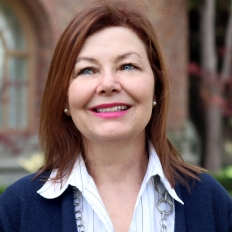 Elizabeth McKay was the Acting Deputy Chief of Mission and formerly the Minister Counselor for Public Affairs at the U.S. Mission in South Africa until July 2018.  She was responsible for the day-to-day operations of the U.S. Embassy in Pretoria and the U.S. Consulates in Cape Town, Johannesburg, and Durban. As the Minister Counselor for Public Affairs, Elizabeth directed public diplomacy outreach, programmatic initiatives, and thoughtful dialogue with an audience of 57 million South Africans.

Elizabeth has a B.A. in Journalism from the University of Central Florida and a Masters in National Security Strategy from the National War College. In addition to multiple State Department Superior Honor and Meritorious Honor awards, she has received interagency recognition for her achievements. She speaks Spanish, Italian, Thai, Lao and Turkish.