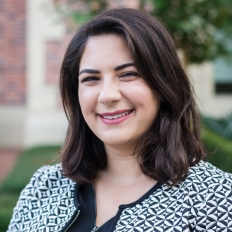 Dena Taha graduated from the USC Master of Public Diplomacy program in Fall 2018 and served as Communication Chair of the Society of Public Diplomats. Prior to her studies at USC, she was a news producer at Al-Arabiya News Channel, a pan-Arab television news channel broadcast in Arabic based in Dubai, at its United Nations/New York Bureau. She was responsible for covering daily proceedings there related to the Middle East and the Arab world, and US foreign policy in that region. Being at the United Nations, the heart of international political dialogue and cooperation, drew her to the field of international communication and development. She received a B.S. in Mathematics from the American University of Beirut in 2013 and was a visiting non-degree student at the Near and Middle Eastern Civilization department at the University of Toronto for the academic year 2013-2014. Dena is fluent in English and Arabic, with basic knowledge of French.