The Iranian Election: Following A Conversation

The response by individuals using Twitter to the Iranian election provides important perspectives for the scholarship and practice of Public Diplomacy.

Since last June’s election in Iran, updates of developments have appeared on Twitter alongside messages of support for protesters and celebratory tweets when websites from one side or the other were taken down. This spawned a number of press articles focusing on Iran’s Twitter Revolution.

More traditional news sources have been either struggling to keep pace with events or have been criticized for the slow speed with which particularly cable news began to cover the protests. As Brian Stelter reported, untold thousands used the label “#CNNfail” on Twitter to vent their frustrations about CNN’s failure to coverage the event as some viewers had expected.

However, the reality of Twitter during the Iranian elections is not untold thousands but potentially quantifiable thousands. Recent studies published in First Monday or conducted at Harvard Business School have provided a demonstration of the potential of mapping in developing a greater understanding of interactions through social media. The ability to map and analyze the interaction between Twitter accounts can provide a greater understanding of the response to a specific event, in this case the Iranian election, in a way not possible in narrative accounts. This same technique of mapping tweets also provides the potential to understand opportunities in conducting and evaluating PD 2.0.

Map of the #tags individual users adopted to identify Tweets about the Iranian election.*

(A larger png image is available )

The larger spheres on the map represent particular #tags used on Twitter. The interlinked set of four blue, orange, green and grey, spheres on the left relate to #GR88, #FreeIran, #Neda, and #Sohrab, while the pink sphere on the right represents #HelpIranElection.* The smaller dots clustered around each of these spheres represent unique Twitter user accounts.**

The map shows two virtually separate conversations, that of the four spheres on the left and the single #tag on the right. The left hand conversation focused on, for example, forthcoming protests and using the shortened URL to share stories or video. These users appeared to be either in Iran or very well connected as they would have access to eye-witness accounts, details of future events and tend to be the first to hear of articles written by local journalists/citizen journalists.. A common thread in the early tweets was the desire to get stories then on niche local websites to the attention of international broadcasters or a loosely defined western audience.

The right hand cluster appeared to have a much more broad audience with greater emphasis on ‘showing your support for democracy’ and an app to allow users around the world to apply a green overlay on their avatar to show that support. As a result this #tag became heavily liked to helpiranelection.com created by a software developer in Israel.

At the time the data was collected only 2 users had contributed to both groups, identified by the two lines linking the larger clusters. The only other likely source of overlap, #IranElection, had so much data that a user would have had to scan 1,000 tweets every hour to keep up. Given these factors, a situation developed where one group was seeking to show support, while the other seeking to get their story heard by a wider audience. Unfortunately each group was telling themselves rather than each other. 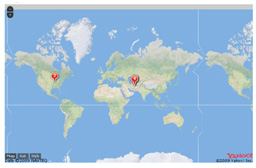 The above map, using Twitter API for geolocation data also shows the tendency for users to be in one of two locations. While geolocation data is not necessarily accurate, and number of users identified is limited in this method of mapping through Yahoo, the location of users with that data is an interesting coincidence.

This brief description begins the process of getting beyond the narrative descriptions of Iran’s twitter revolution to understand the actual interactions which were taking place. Further in depth understanding will come from textual analysis of Tweets, along with the mapping the development of these networks over time, identifying the number of times users Tweet to a particular #tag and whether these are then re-tweeted.

The tweet maps and the Iranian case study provide some wider perspectives for Public Diplomacy:

Second, Twitter is more than a micro-broadcast system for transmitting information to a self-selecting group of followers, many of whom may be located within the organization’s domestic constituency. Twitter is an environment in which there are two parallel methods of engagement one based on both themes (represented by #tags) and the other followers. An organization should consider which would be more effective in reaching each specific community.

Three, were it to serve a goal identified by a Public Diplomacy organization, actively facilitating the link between a group seeking a wider audience and those wishing to show support may enable both groups and the PD organization to benefit. This mirrors Nick Cull’s observation that public diplomacy is not always ‘about you’. In this case that may mean empowering indigenous voices within a target state or states.

If Public Diplomacy 2.0 or digital diplomacy is to be truly successful – the ability to understand the actual interactions of social media users will have to become central to the planning and evaluation of programmes and initiatives.

Notes
* This brief analysis of the interaction uses data to July 09 which was presented at USC September 2009. Hashtags are a community-driven convention for adding additional context and metadata to your tweets: see the example of #Sandiegofire.

** The popular #Iranelection tag has been omitted from this post as the approximately 2 million tweets would require more analysis than can fit in one blog post. Equally, at 2 million tweets since mid-June, averaging over 22,000 tweets a day, the tag is so clogged with tweets that users adopt sub-groups with more specific tags.

*** Twitter uses a unique user ID which remains the same even if the screen / user is changed. When creating the maps of these tweets the use of ID number rather than the user name allows for disambiguation between user accounts.