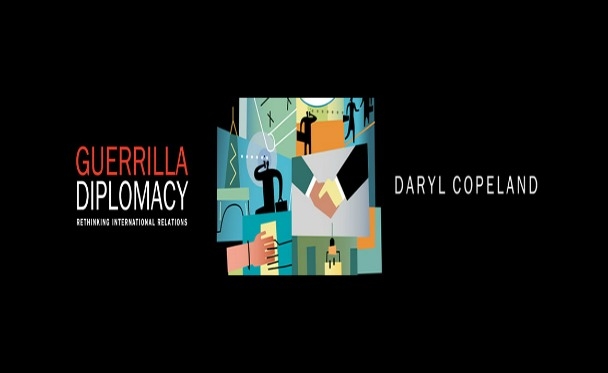 
In his talk, Copeland discussed his feeling that there is something vitally wrong with the way diplomacy is being conducted in the contemporary world. He asserted that diplomacy has been mistakenly sidelined, mainly by defense. The field, as a whole, has adapted poorly to the challenges of globalization. It was organized to fight the last war- the Cold War- and has failed to adapt an alternative understanding of security for the information age.

Copeland opened his presentation with the story of Shahrazad, a legendary Persian queen who tells one thousand and one stories to save herself from execution. Copeland drew the following lessons for diplomacy from the ancient Persian tale: 1) use your head, 2) stop fighting, and keep talking until they send the executioner home.

• The Cold War is over- Copeland states that international relations has morphed into something similar which is a long war and that the fundamental constructs that characterizes the Cold War have been needlessly carried over, such as the tendency of a black and white world view. The characterization of the threat to world order, focusing on an “us vs. them” mentality. He stated that the natural response to this threat is still militarized international policy, and that tends to marginalize diplomacy or at least it reduces the scope for maneuver.

• Security is a marshal art- Copeland disagrees; he thinks that security in the globalization age is a function of long term, human centered, equitable development, which underlies a lot of the insecurity in the world today.

• Diplomacy is about weakness and appeasement- Copeland pushes for the need for this bad reputation of diplomacy to change.

Addressing the implications of these myths is Guerrilla Diplomacy’s main focus: “If development is the new security in the age of globalization then diplomacy must replace defense as the center of international diplomacy.” But this, Copeland added, depends upon the reconstruction of diplomacy so that it is up for the challenge. Copeland described three attributes of “guerrilla diplomats”: acuity, agility and autonomy.

Copeland concluded that diplomats can do things better, but at the end of they day, there is a real correlation between results and resources. Diplomacy as a function is significantly under-resourced and as much as we try to rethink the way diplomats do things, it is going to take resources as well.

About Guerrilla Diplomacy
Daryl Copeland charts the course for a new kind of diplomacy, one in tune with the demands of today’s interconnected, technology driven world. Eschewing platitudes and broadly rethinking issues of security and development, Copeland provides the tools needed to frame and manage issues ranging from climate change to pandemic disease to asymmetrical conflict and weapons of mass destruction. The essential keystone of his approach is the modern diplomat, able to nimbly engage with a plethora of new international actors and happier mixing with the population than mingling with colleagues inside embassy walls.

About Daryl Copeland
Daryl Copeland is a 2009 research fellow at the University of Southern California's Center on Public Diplomacy and senior fellow at the University of Toronto's Munk Centre for International Studies. In 1981-2009 he served as a Canadian diplomat, with postings in Thailand, Ethiopia, New Zealand, and Malaysia, and in 1996-1999 was national program director with the Canadian Institute of International Affairs.

Citizen Diplomacy in Action: One Example from Oklahoma