Home|The UN Security Council and Public Diplomacy:  Getting a Seat at the Top Table 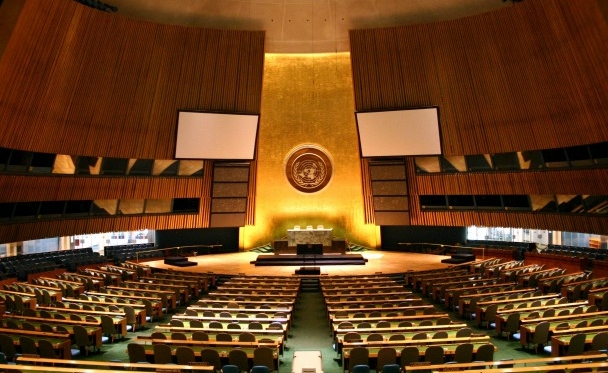 The UN Security Council and Public Diplomacy:  Getting a Seat at the Top Table

The USC Center on Public Diplomacy was pleased to host Caitlin Byrne (CPD Research Fellow 2010-2012) who discussed her research project, "Public Diplomacy and the United Nations Security Council: Securing a Seat at the Top Table."

Caitlin spoke about why and how sovereign states use public diplomacy in the pursuit of a non-permanent seat on the United Nations Security Council (UNSC). The research for this project was drawn upon the experience of middle power Australia, a founding member and longstanding supporter of the United Nations, with past and current aspirations to sit at the UNSC table. Read the event synopsis below.
.
Key objectives included:
i) Assess the strategic role of public diplomacy (vis a vis traditional diplomacy) in the development of a state-initiated campaign for a non-permanent seat on the UNSC; and

ii) Examine and map the range of public diplomacy methods typically used in a campaign for the UNSC, as a tool that might inform policy-makers with regard to both strategic development and evaluation of UNSC campaigns; and

iii) Assess in qualitative terms, the soft power value (positive or negative) that is derived by the campaigning state as a result of the public diplomacy aspects of that campaign, (quite apart from whether that state is successful or unsuccessful in gaining the UNSC seat).

To read more about Caitlin's project, Public Diplomacy and the United Nations Security Council: Securing a Seat at the Top Table.

SYNOPSIS
For middle powers, winning a non-permanent seat on the UN Security Council (UNSC) is a “prize to be pursued with vigor.” “It’s like moving from the little kids table to the big kids table,” said CPD Research Fellow Caitlyn Byrne. Byrne argued that a successful campaign employs both traditional and public diplomacy tactics because of the importance placed on a country’s image and reputation in today’s global society. Image is increasingly cultivated through public diplomacy. “Positive national reputations are hard earned,” she said. “Policies are taken into account by global community, with special attention being paid to the difference between what states do and what they say they do.”One of Bryne’s main arguments for engaging the international public in the UNSC campaign process is the effect of UN decisions on the international community. “Many of the world’s most vulnerable people feel the impact of sanctions and force,” she said. “Therefore there should be a wider public interest in the process.”Byrne also suggested expanding the definition of public diplomacy to include domestic publics. She cited Australia’s previous failure to win a seat on the UNSC and the ensuing domestic outcry by the Australian public as an example. Engendering domestic commitment and projecting it to an international audience may improve the chances of election.

About Caitlin Byrne:
Caitlin Byrne is an Assistant Professor of International Relations at Bond University, (Queensland, Australia) where she teaches courses in global statecraft, East-West diplomacy and Australian foreign policy. Caitlin’s current research explores frameworks to enhance the development and delivery of public diplomacy as an instrument of strategic international policy. She is also exploring the implications of public diplomacy for the practice of traditional diplomacy, including within institutions such as the United Nations. Caitlin has recently joined the academic profession, having established her credentials as a policy practitioner. She began her professional career with the Australian Department of Foreign Affairs and Trade (DFAT). From 1994-2001, Caitlin was engaged in roles encompassing legal and foreign policy, diplomatic and consular representation, and service delivery. In 2001, Caitlin left DFAT to expand her career interests in social policy projects and reform agendas, with domestic and international policy implications. Caitlin received both her LLB and Ph.D from Bond University in 1993 and 2010 respectively. Read more.

Public Diplomacy and the United Nations Security Council: Securing a Seat at the Top Table