Home|Beyond the Blackberry Ban: Realpolitik and the Negotiation of Digital Rights

Beyond the Blackberry Ban: Realpolitik and the Negotiation of Digital Rights

There is a battle brewing in international politics that includes a number of important stakeholders and leaders in the global arena. And it is not about how long the U.S. led coalition should stay in Afghanistan or Iraq, or about the need for greater regulations of the international financial sector. Rather, it is about information sovereignty. As Monroe Price notes, the battle lines for this debate were drawn earlier this year when Secretary of State Hillary Clinton gave a speech at the Smithsonian‘s Newseum, on the heels of Google‘s decision to challenge China‘s control of the Internet within its borders, making the case for a universal freedom to connect: “the idea that governments should not prevent people from connecting to the internet, to websites, or to each other.” The current controversy surrounding the potential ban on BlackBerry services in several countries is an important chapter in the conversation of what information sovereignty means in today‘s Network Society, and may provide some important foreshadowing as to how the debate will play out moving forward.

On August 1, the United Arab Emirates (UAE) announced its intention to ban e-mail, web browsing and messaging for all BlackBerry smartphones, beginning on October 11. Just hours later, Saudi Arabia‘s telecommunications regulatory authority, the Communications and Information Technology Commission followed suit, declaring its intention to restrict the use of BlackBerry‘s messenger (BBM) service, as well as all other BlackBerry enabled data communication, beginning on August 6 (BBM is an instant messaging tool available on BlackBerry smartphones that allows for instantaneous and secure communications between BlackBerry users around the world at no cost to either user). In the ensuing weeks, Turkey, Kuwait, India, Lebanon, Indonesia and Algeria have each indicated that they are considering similar restrictions.

In the wake of these announcements, all eyes have turned towards Research in Motion (RIM), the Canadian telecommunication and wireless device company that develops and manages BlackBerry mobile services. RIM policy, to date, has been to route all data exchanged on its BlackBerry devices directly from the handset to its servers in Canada, the U.S. and the UK where it can tightly control who has access to the encrypted information stored on the servers, and thus the security of the communications. This highly protected network is an essential component of the success of its BlackBerry products. RIM‘s encryption technologies have instilled confidence in corporations and even the United States secret service, both of which trust the network to exchange proprietary and top secret information from any where in the world. Today, Blackberries account for 18.2% of worldwide smartphone sales, second only to Nokia‘s Symbian OS. 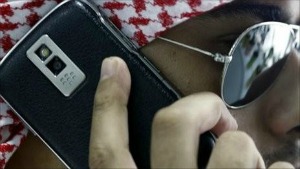 Now, RIMs greatest strength looks to become its greatest weakness, as governments move to increase monitoring mobile communications within their borders. The UAE government called for a ban on BlackBerry services because the encryption technology prevents its security services from adequately monitoring dissident or illegal (for example, promoting violence) political communication. It alleges that BlackBerry smartphones—and BBM in particular—are now the go-to technology for expressing and organizing political protests, including a recent coordinated protest over the high price of gasoline. Last year, Bahrain expressed similar concerns, outlawing the exchange of local news via BBM after a BlackBerry user generated a following of 11,000 fellow BlackBerry users that used the untraceable BBM feature to exchange controversial local news about the Emirate. Governmental fears are not unwarranted. UAE-based blogger Ahmed Mansour argues that BlackBerries were a boon for political activism in the region: “When BlackBerry came, I started to get messages criticizing the government from people I’d never seen involved in activism…Regular people started discussing taboo subjects.”

Concerns about BlackBerry are not limited to its utility for political activism. India has also indicated a need to closely monitor mobile communication networks, pointing towards the critical role of mobile phones (though, non-BlackBerry) in the organization and carrying-out of the 2008 Mumbai terrorist attacks. Saudi Arabian officials are also concerned with the use of BlackBerry smartphones to bypass web filters to access politically and sexually provocative websites. There have also been reports about Saudi youth using BBM to circumvent cultural and religious mores by securely texting and sending photos back and forth between members of the opposite sex.

As a possible solution, India, Saudi Arabia, and the UAE have each asked RIM to establish a Network Operation Center (NOC)—otherwise known as a proxy server—within each of the countries in order to allow for better access to data exchanged on the BlackBerry network. Their logic is fairly straightforward. Since data exchanged on the BlackBerry network was the only digital information accessible within the UAE that was not routed through local, government operated, servers, its Telecommunications Regulatory Authority (TRA) actually required that RIM set up a local NOC in 2007. According to the UAE‘s TRA, “Today’s decision is based on the fact that, in their current form, certain BlackBerry services allow users to act without any legal accountability, causing judicial, social and national-security concerns.”

Put another way, it could very well be the case that RIM, via its BlackBerry devices, has set up the only global communications network that could actually be relatively secure from government monitoring and/or interference. Isn‘t this exactly the type of network that Hillary Clinton called for in January when she argued for an international recognition of the right to connect to and converse freely via the global World Wide Web? If so, shouldn‘t we be talking about the importance of maintaining the sanctity of such a network, and even thinking through how to get more secure, BlackBerry devices in the hands of civil society advocates and leaders in the Middle East? Or would such a strategy backfire, similar to the way U.S. arms sales to mujahidin during the Cold War continue to thwart American policy in Afghanistan today?

In the days following the UAE‘s proposed BlackBerry ban, State Department Press Secretary Phillip J. Crowley connected the issue to Clinton‘s speech on Global Internet Freedom, saying “We‘re disappointed at the announcement…It‘s about what we think is an important element of democracy, human rights, and freedom of information and the flow of information in the 21st century.” The fact that the State Department came to the defense of a Canadian company that competes directly with several American companies—Google and Apple, just to mention two—in the name of an amorphous commitment to the free flow of digital communications speaks to the growing importance of digital rights in U.S. foreign policy thinking. As a recent article in The New York Times Magazine outlined, Hillary Clinton—“the Godmother of 21st century statecraft”—puts digital technologies and networks at the center of the modern foreign policy decision-making process. But what would a world with ubiquitous secure, mobile communications actually look like? Would democracy and civil society flourish, or would hateful and violent groups be better able to organize and plan their terrorizing of society?

Turns out, we may never know. Following a path trail-blazed by Google in its acquiescence to Chinese authorities starting in 2006, it appears that RIM will capitulate to authoritarian governments in order to continue to compete in developing markets. Moreover, increased scrutiny instigated by the current kerfuffle has revealed that this will not be the first time that RIM has caved in to government demands in order to expand its market share. For example, it provided encryption keys and local proxy servers to Russian and Chinese authorities in order to comply with local telecommunication regulations. In the last week, Saudi officials leaked that RIM had also caved, agreeing to put a proxy server in the Kingdom that would enable Saudi monitoring of BlackBerry data. And a similar deal has been struck with India too, with ones for the UAE, Turkey, Kuwait, Bahrain, Indonesia and Algeria likely to follow. Moreover, this debate will not end with RIM or BlackBerry. News has already surfaced that Indian authorities plan on going after Google and Skype as well, for fear that encrypted data shared on their networks also constitute a national security threat.

But it‘s not just foreign governments that are struggling to reassert their right to information sovereignty in the name of national security. Just last month, the Obama administration attacked WikiLeaks for its online disclosure of over 91,000 classified documents about the war in Afghanistan as a threat to national security, vowing to pursue a criminal investigation of the organization and its founder, Julian Assange. The White House continues to press the matter, and now is soliciting international cooperation to help crack down on Assange and his “stateless news organization.” Thus, in one breath, the Obama administration is highly critical of foreign governments‘ (such as Iran and China) efforts to control the flow of information within their borders and in another calls for international cooperation in cracking down on a non-governmental organization whose primary mission is to enhance democratic deliberations and accountability through transparency. If there are substantive differences between the Obama administration‘s handling of the WikiLeaks controversy, the growing clamp down on encrypted mobile communications (i.e. BlackBerries) and the Chinese development of a controlled and indigenous Intranet, they are certainly not being discussed by the stakeholders with any level of nuance.

There is a real need for a credible, vocal government advocate able to argue for and, perhaps, even implement Internet freedoms…

How this debate plays out—the rights of governments to monitor and control the flow and exchange of information within their borders—will have important and direct consequences for questions of national security, civil society, governance, and finance. In two recent controversies noted here—China/Google, the BlackBerry ban—governments uninterested in the protection of digital rights have prevailed, mostly because corporations responsible for enabling global communications have acquiesced for the sake of potential profits down the road. Indeed, only WikiLeaks—a non-profit, “stateless” organization—has successfully managed to maintain its mission of furthering transparent governance without caving in to government authorities. It is unfortunate—and ironic—that WikiLeaks’ success comes at the expense of the Obama administration, one of the most vocal government advocates for a global regime protecting the free flow of communication.

Controversies related to international Internet freedom and digital rights continue to creep into everyday foreign policy debates and have important geopolitical consequences. Moving forward, the Obama administration needs to think through its policies related to information sovereignty so it has a clear and consistent approach. If the U.S. really wants to be an advocate for global norms defending and protecting digital rights of global civil society, including the right to connect and freely communicate, then it can‘t also attack WikiLeaks—an organization that embodies the exact principles Secretary Clinton called for—when it uses a free and open Internet to disseminate information harmful towards American foreign policy. When it comes to Internet freedoms, U.S. hypocrisy has consequences that extend beyond these immediate foreign policy controversies. There is a real need for a credible, vocal government advocate able to argue for and, perhaps, even implement Internet freedoms in parts of the world that have clamped too far down on democratic discourse, and if the U.S. does not have a clear and consistent approach to these questions, the powerful government advocates who fear a free and global Internet will win the debate.

Author Biography
Shawn Powers is an Assistant Professor at Georgia State University’s Department of Communication where he works closely with the Center on International Media Education. He has previously been a Visiting Assistant Professor at USC’s Annenberg School for Communication and Journalism London Program and a Visiting Research Fellow at the London School of Economics and Political Science. He earned his Ph.D. from USC Annenberg. Shawn’s research interests include mass media and society, new and social media technologies, diasporic communities, globalization and traditional and public diplomacy. He has conducted field research in Asia, the Middle East, North Africa, Eastern and Western Europe and North America.