In January 2010, just after the Haitian earthquake and Chinese government attempts to hack into Google, Secretary of State Hillary Clinton gave a major speech outlining the United States‘ foreign policy concerning Internet Freedom. She presented five freedoms that allow open communication platforms and facilitate a worldview focusing on the Internet as the great equalizer. Clinton revisited the idea of the Internet and its networks, saying, “Providing people with access to knowledge and potential markets, networks can create opportunities where none exist.” In the speech Clinton committed the State Department to fostering open communication through technology.

Clinton‘s speech, at the time, had little impact in the media; however, in July the New York Times Magazine ran a story on digital diplomacy. The article highlighted how Clinton‘s call to action is being carried out by two digital diplomats, Jared Cohen and Alec Ross, who are evangelizing new Web 2.0 tools to bolster U.S. public diplomacy. The piece touted the successes of digital diplomacy in bringing together leaders from across industries into teams that travel to foreign countries as “Tech.dels”. The Tech.dels learn how technology can best be utilized to solve problems and then commit team members to “deliverables” in order to make those ideas a reality. Cohen and Ross believe 21st-century statecraft “represents a shift in form and in strategy — a way to amplify traditional diplomatic efforts, develop tech-based policy solutions and encourage cyberactivism.” They are aware that engaging in these spaces requires giving up a level of control, but they have found an audience that wants to receive information via new technology. They make the case that if the State Department is not willing to speak to that audience, a significant opportunity will be lost. In an earlier interview for the Department of State website, Alec Ross said, “Today, in the 21st century, there are literally millions of sources of information. People look at blogs; people have favorite websites; people get information from list serves, from smaller publications, as well now as from 200 TV channels. And so what it means is that we have to be more nimble but also reach people where they are because as audiences are now able to get information from new and diverse sources, they‘re able to apply their specialized tastes and they just won‘t tune in to things that don‘t speak to them.” 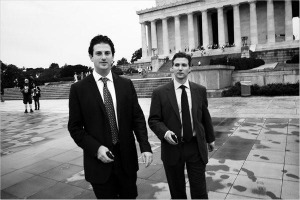 Shortly after The New York Times Magazine article appeared, bloggers responded voicing both criticism and support. The Economist’s blog, Babbage voiced concern that perhaps the medium was changing but America‘s foreign policy and narcissistic message remained much the same. Even tech all-star Craig Newmark, founder of Craigslist, felt the need to chime in to support Ross and Cohen, stating, “I bear witness that they’re doing a great job, I’ve seen it first hand.”

Two weeks after the digital diplomacy article ran, Emmanuel Yujuico and Betsy Gelb called out the United States on a number of policies and initiatives that diverge from the optimistic talk of Cohen and Ross. In an article that ran in Foreign Affairs, they criticized what they deemed to be “go-it-alone grand designs” with ethnocentric world views that historically fail. Yujuico and Gelb called for “small wins” that allow for trial and error.

Most recently digital media consultant Andrew Rosen chimed in, writing “Messy Digital Diplomacy” for The Huffington Post. Rosen criticized the Administration for not having a grand strategy and for focusing on smaller disparate projects. Referring to Cohen and Ross‘ approach he states, “This evangelism is seductive in its simplicity and passion, and is being mistaken for a proactive strategy instead of the isolated and abstract tactic that 21st century statecraft should be.”

In short, the U.S. State Department innovation team has had a rough summer being both criticized for having too large a vision and then attacked for not having sufficient vision. Perhaps one of the best papers articulating the changes Cohen and Ross have been working to implement and explain comes from Dr. Anne-Marie Slaughter, the current Director of Policy Planning for the State Department. She wrote a paper prior to her appointment at the State Department titled, “America‘s Edge: Power in the Networked Century.” In this paper she makes a compelling argument for the U.S. to harness the power of networks, particularly the new online networks and “reinvent itself” as a “central player in an integrated world”. It explores advantages the U.S. can have in a powersharing, networked world. So when Cohen and Ross try to articulate why digital diplomacy has potential to reshape international politics they are imagining a world where public diplomacy is dominant and collaboration between countries is the new normative behavior.

As many recent articles have noted, creating a networked government prepared to collaborate with foreign governments and their publics to address policy issues and democratize the world is no easy task. While there is little doubt that networks are taking on a more prominent role in an information society, it is also unclear how far-reaching or ultimately influential these networks will become.

Furthermore, large governments and corporations will struggle with the challenge to become flexible and relate to individuals in ways the 20th century never allowed. One obstacle that has yet to be overcome is allowing employees to become the face of an organization, knowing that organizations outlast employees. The State Department has struggled to replace Jared Cohen after his departure to Google. It has yet to be seen whether an organization can become “personable” enough to emotionally engage individuals; or whether those connections will ever be able to substantially impact policies that are important to foreign publics in a way that is satisfactory and representative of a true partnership with give and take. Additionally, organizations and countries may find the need to become more flat and flexible, especially as related to communication outreach and response. The rate of change and innovation is continuing to climb, and as it does, the expectations and ability of future generations to adapt will increase exponentially.

Author Biography
Tori Horton is an adjunct faculty member at Weber State University. She recently graduated from the USC Public Diplomacy Master’s Program. She has worked in the field of public diplomacy for the past five years. Her areas of interest include new technology, nation branding, and cultural exchange. Recently Tori worked as Project Manager for a grant from the John D. and Catherine T. MacArthur Foundation at the University of Southern California exploring virtual worlds and online communication.