No Simple App For Public Diplomacy

There is growing focus on social media and mobile technology as promising mediums for engagement and interaction in the public diplomacy toolbox. However, citizens and governments around the world are still experimenting with how best to use, and treat, these new communication tools. The process is certainly drawing media attention, and observers and practitioners alike are curious about the experiment. This spotlight overviews what types of mobile and social media initiatives have been undertaken recently, and what reactions and responses they have yielded.

Capitalizing on the so-called mobile phone revolution in Africa, this summer, the U.S. Department of State launched “Apps4Africa”, tapping into the emerging regional community of civic-minded technology leaders (by partnering with Appfrica Labs, based in Kampala, the iHub and the Social Development Network [SODNET], in Nairobi). Apps4Africa is a contest that challenges local coders and software developers to create software tools and applications that can meet the social and economic development needs of citizens across East Africa.  Interestingly, Apps4Africa, whose concept and goals might seem to fall within the domain of “development work” (USAID), is in fact being spearheaded directly by Judith McHale‘s Public Diplomacy and Public Affairs office. The initiative is an example of an emerging overlap, or blurring of lines, between the use of mobile/new technology (tech) tools for engagement and the use of mobile/new tech tools for international development. As described by diplomat Suzanne Hall, “21st Century Statecraft is about reaching beyond typical government-to-government interactions. Under Secretary Clinton’s leadership, we are using technology to connect directly with people and empower them to take the lead in their own development.”

The State Department also solidified a new series of networking events called Tech@State. The August event in this series was yet another exploration of how mobiles can be used to improve livelihoods around the world, by way of “m-banking” as a mechanism for financial inclusion-as nearly 5 billion of the world’s 6.6 billion people have mobile phones, only about 1.6 billion have bank accounts.

Alongside the flurry of activity in the realm of social media and mobile tech, there are ongoing debates about the benefits and effectiveness of new media based initiatives. Recently, Sheldon Himelfarb, of the U.S. Institute for Peace, was quoted in the BBC emphasizing the need to moderate promise and potential of new and social media, with the reality that we are still in an experimental stage in this “brave new world public diplomacy.” He explained, “It is an opportunity to engage with the next generation of peace builders. And that’s really valuable.”  But it remains difficult to quantify the benefits of conducting public diplomacy through social media. The reach may be wider but the impact and benefit are still unknown. Similarly, while there is growing interest in the arena of mobiles for development (or “M4D”), the field is checkered with some success but, certainly, many failures.  Few initiatives are able to achieve the scale and sustainability required to truly produce meaningful social change or measurable development goals in this still experimental and inherently complex area of development work, which varies greatly from country to country.

As in any public diplomacy strategy design, the advisable position is to take a realistic perspective in approaching and implementing programs that leverage mobile tech and social media: moderate expectations, and focus on implementing strategic and careful initiatives which take political and cultural specificities into consideration.

In addition to debating the measures of success of social media and mobile technology as mechanisms for public diplomacy, it is just as (if not more) important to soberly consider the potential pitfalls as well as security and political implications around the promotion of new communication technologies. What implications are there if the State Department puts its seal of approval on various new tech tools—both by actively promoting them and encouraging their widespread adoption, and by bringing tech company representatives on official delegations to visit foreign countries as a means to conduct public diplomacy, by enabling, empowering and connecting civil societies in countries abroad?

The danger for citizens can take many shapes, the most basic being that these tools can allow authoritarian governments to spy, control, suppress or imprison dissidents and citizens expressing their opinions. While Secretary Clinton eventually did get involved in this delicate public diplomacy dance and spoke out in response to the recent RIM/BlackBerry controversy in the UAE and Saudi Arabia, acknowledging security concerns but also stressing citizens‘ rights of ‘free use and access.‘ Rami G. Khouri, editor-atlarge of Lebanon‘s The Daily Star, foreshadowed the conflict of interest in a July International Herald Tribune opinion piece ―Feeding both the jailer and the prisoner is not a sustainable or sensible policy. I would not be surprised if some wise-guy young Arab soon sends a tweet to Hillary Clinton saying, ―you‘re either with us, or you‘re with the security state.” 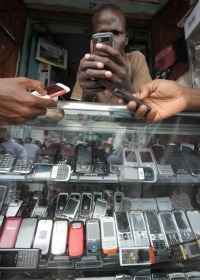 The issue is thornier still when the same government that is encouraging citizens to use mobiles more heavily to interact, is also pro-electronic surveillance.  In an op-ed by Richard A. Falkenrath, “Texting With Terrorists,” reminds us that, “the United Arab Emirates is in no way unique in wanting a back door into the telecommunications services used inside its borders to allow officials to eavesdrop on users.” This reality of the digital age is certainly sticky when observed from the perspective of individual citizens‘ privacy.

It is too early to tell exactly what implications these issues will have for public diplomacy (and digital diplomacy overall) in the mid to long-term, as the age of connecting and seeking new ways to provide services over mobile and social media is only just beginning. It is certain that international dialogue will increasingly occur in the palm of our hands, and both strategic and responsible approaches to engaging over mobile and social media technologies will be critical.

Author Biography
Anoush Rima Tatevossian is Director of Projects and Partnerships for MobileActive.org, ―A global network of people using mobile technology for social impact‖. She is a graduate of the Master of Public Diplomacy program at USC where she served as Editor-in-Chief of Public Diplomacy (“PD”) magazine. She has experience consulting with various international organiza-tions, and previously worked as the Executive Director of the Armenian Volunteer Corps, a grassroots development NGO. She speaks Armenian.