Home|A Separation as a Tool of Iranian Cultural Diplomacy

A Separation as a Tool of Iranian Cultural Diplomacy

Cultural diplomacy has often been underrated as a potent form of public diplomacy. Currently, we are seeing a change in the practice of cultural diplomacy as it expands to include non-state actors. One example is Iranian director Asghar Farhadi, whose award-winning film, A Separation, has provided foreign audiences around the world with an accurate and credible portrayal of Iranian culture and identity at a time when tension has been running high between Iran and the West. Much of cultural diplomacy requires listening, and wading deep into cultures other than one’s own.  Since relations between Iran and the West, particularly the United States, have been strained, such a film provides an opportunity to convey cultural information from Iran to Western audiences eager to learn more about a nation they perceive as foreign and mysterious. The works of artists such as Farhadi and Abbas Kiarostami, another internationally-known Iranian director, stand out due to their ability to express Iranian cultural identity through film in a penetrating and insightful manner.

Farhadi’s A Separation, which he describes as a “detective film told in the style of a documentary,” demonstrates the influence of film diplomacy (a subset of cultural diplomacy) as a medium for communicating messages, so often miscommunicated, to the global audience. In a country where filmmakers must continuously practice self-censorship and exercise caution on anything that could be perceived as politically critical, very few directors have succeeded in creatively expressing Iranian reality while avoiding crossing that line. Some filmmakers have been imprisoned, and the Ministry of Culture has disbanded the primary film industry guild, Iran’s House of Cinema. Indeed, A Separation was made without government financial backing, and production was for a time banned due to Farhadi’s outspoken support for other filmmakers penalized by the government for their views and work.

A Separation tells the story of the conflicted relationship between a modern middle-class Iranian couple, Nader and Simin. Simin wishes to leave Iran with her family in order to have a better life. However, Nader refuses to abandon his ailing father who suffers from Alzheimer’s disease. The tension causes Simin to move into her mother’s house, and Nader to hire a religious woman named Razieh from a lower class to take care of his father. Shortly thereafter, serious friction between Nader and Razieh’s family occurs. Their animosity comes from their religious and cultural differences in that situation, but it hints at the fundamental conflict in Iranian society today under the Islamic Republic between the religious lower class and the more modern middle class. In Farhadi’s hands, this conflict becomes a personal film full of suspense and mystery, filled with eloquent and potent moments of silence.

In his award acceptance speech on receiving the Oscar for Best Foreign Language Film of 2011, Farhadi said:
At this time many Iranians all over the world are watching us, and I imagine them to be very happy. They are happy not just because of an important award, or a film, or a filmmaker, but, because at a time of talk of war, intimidation, and aggressions exchanged between politicians, the name of their country, Iran, is spoken here through her glorious culture; a rich and ancient culture that has been hidden under the heavy dust of politics. I proudly offer this award to the people of my country; the people who respect all cultures and civilizations and despise hostility and resentment.
A Separation’s Oscar win brings greater awareness to a film that, through its depiction of the depth and complexity of Iranian culture, reminds us of the humanness of the Iranian people and the difficulties of their daily lives.

But while the international community praised the film and its’ win, the Iranian government demonstrated less enthusiasm for the product. Iranian government officials cancelled a ceremony planned to honor Farhadi for his accomplishment. The two Iranian cinema groups that were to host the ceremony said in a joint statement, “We intended to have a simple and friendly meeting to say ‘thank you’ for the great achievement you brought Iran and Iranian Cinema but the cultural custodians did not let us realize this.” However, this did not prevent Iranians from expressing their joy as a large crowd gathered at Imam Khomeini International Airport to greet Farhadi. The Iranian government, rather than acting as a facilitator for cultural diplomacy, has chosen to ignore the film’s success, seeing it instead as weakening its own interests. Former President Mohammed Khatami has been a rare public figure in Iran, publicly congratulating Farhadi.  In an open letter to the director, he wrote, “Cinema helps humanity to overcome aggression [and to be] able to bring hearts closer to each other.” The United States, in contrast, has played a great role as facilitator by importing the film and screening it in various theaters across the nation.  In his Norouz (Persian New Year) message to the people of Iran, President Obama declared, “There is no reason for the United States and Iran to be divided from one another,” and went on to speak about the Iranian movie A Separation’s Oscar win.

For citizens of Iran, and for many in the West who have seen the film and been given—perhaps for the first time—a sense of who the Iranians are, the film’s Oscar achievement has briefly taken attention away from talk of nuclear proliferation and war.  The U.S. State Department even put aside talk of nuclear weapons and congratulated “the vibrancy and historical greatness of the independent film industry in Iran.’’ Unfortunately, much of the mainstream media seems not to have noticed.  This was a missed opportunity.  At a time of such strained relations, when so many in positions of influence seem to want a military confrontation, it is all the more important that people on each side truly understand those on the other.
_______________________________________________________________
EDITORS NOTE: To read CPD’s blogs on this topic by Javad Rad and R.S. Zaharna and all PDiN headlines relevant to Iranian film, click here.

Author Biography
Leila Nazarian is currently a first year candidate for the Master’s in Public Diplomacy, a joint program offered in partnership with the USC Annenberg School for Communication & Journalism and School of International Relations. Prior to coming to USC Leila earned her B.A. in International and Comparative Politics and M.A. in Middle East and Islamic Studies from the American University in Paris. Her regional focus is on the Middle East. 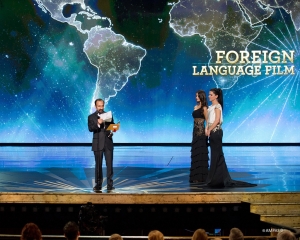