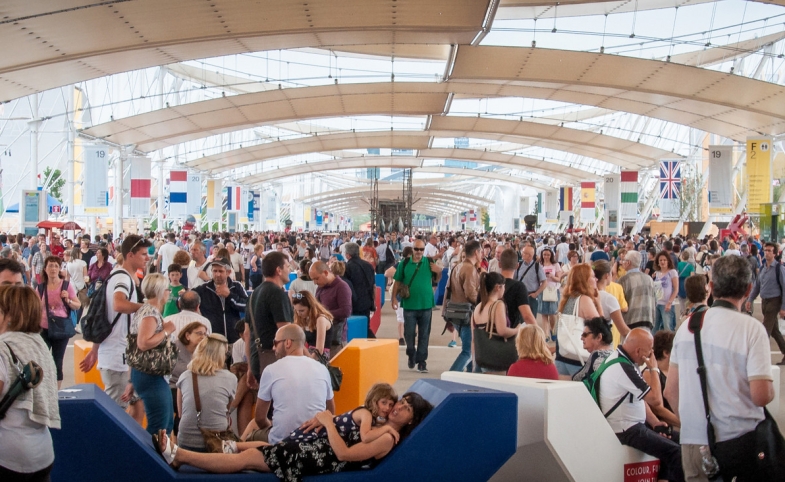 As Expo 2020 Dubai grows closer, we're delighted to share some of CPD's work at past expos highlighting the role of student ambassadors who bring visibility to American culture through in-person connections.

The USA Pavilion Student Ambassador Program has a long history, and CPD captured interviews at the 2015 Milan Expo and the 2010 Shanghai Expo with some of these young American spokespeople.

"I grew up in America, I grew up on a farm, and I know what I believe. But I also know that a lot of people have opinions that are different from mine," says Cassidy. "I start off with personal stories to connect them with my farm back in Missouri. I ask them what they want to know, what they're curious about."

"It's hard being an American trying to explain about the United States here [in Italy]," says Brown. "I [ask]: 'When you think of the United States, what comes to mind?' A lot of people say, 'Oh, you all eat hamburgers and hot dogs, fast food.' But I say, 'the United States, it's a melting pot. There's so much diversity.'"

"One thing that's very unique about the U.S. Pavilion is we have the human element, human touch, due to the students' presence," says Winter. (Read Winter's short essay, "The USA Pavilion's Human Element" here.)

"Every Chinese person I interact with is a possibility to give them a positive perspective on the U.S.," says Mohr.

Learn more about nation branding at the 2015 Milan Expo here and at the 2010 Shanghai Expo here.

The South Korea Pavilion resembles a 'Moon Jar," a traditional Korean pottery vessel. Its architecture is designed to transmit harmony and simplicity. Through technology and art, South Korea communicates the...

Germany is participating in Expo Milan 2015 with the theme "Field of Ideas." The German Pavilion is 29,000 square feet, which includes indoor and outdoor exhibition areas, two restaurants, and a gift shop. The...

Brazil is participating in Expo Milan 2015 with the theme "Feeding the World with Solutions." Visitors of all ages walk on a giant net that serves as the main access to the pavilion. In the pavilion's first floor...

From the "Kitchen Debate" to "Feeding the World"

“We are one in nine billion,” states a striking stainless steel sculpture at the entrance to the U.S. Pavilion at Milan Expo 2015: “Feeding the Planet, Energy for Life,” which opened on May 1 and runs through the end of...