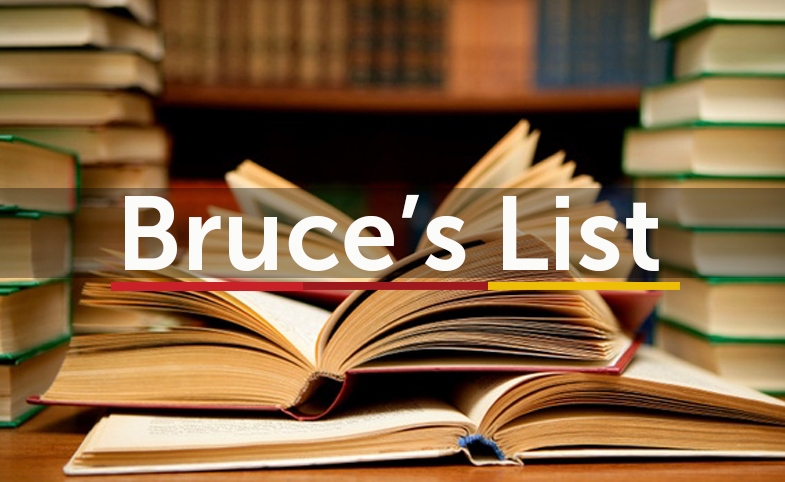 The February 2017 edition of Bruce Gregory's public diplomacy reading list is now available. Known affectionately at CPD as "Bruce's List," this list is a compilation of books, journal articles, papers and blogs on a wide variety of PD topics, featuring a number of CPD scholars. Highlights in this edition include:

Abdul Basir Yosufi, “The Rise and Consolidation of Islamic State: External Intervention and Sectarian Conflict,” Connections QJ, 14, no. 4 (2016), 91-110.  Yosufi (General Director for International Cooperation, Afghanistan Ministry of Interior, Fulbright scholarship recipient and graduate of Georgetown University’s School of Foreign Service) explores ways in which U.S. intervention in Iraq created a “strategic cause” for mobilization of the Islamic State’s (IS) insurgency, the contributing factors of sectarian conflict in Iraq and the region, and how deficiencies in counterinsurgency resources and doctrine allowed IS to consolidate. He supports these claims with reasoning and examples, and also briefly draws contrasts between experiences with IS in Iraq and Al Qaeda in Afghanistan. His paper concludes with lessons learned and policy implications of his analysis that include elements of a political solution, a population-centric counterinsurgency strategy, and a negotiated agreement that addresses security concerns of countries in the region.

Alister Miskimmon, Ben O’Loughlin, and Laura Roselle, eds., Forging the World: Strategic Narratives and International Relations,(University of Michigan Press, 2017).  Essays by prominent IR and communications scholars in this important new book, edited by Miskimmon and O’Loughlin (both University of London) and Roselle (Duke University), examine cutting-edge issues in the use of strategic narratives by political actors. Strategic narratives, they explain, are means by which a wide variety of state and non-state actors seek to construct shared meanings of the past, present, and future that “promote their interests, values, and expectations” and “shape the behavior of domestic and international actors.” Early chapters provide a theoretical framework, with particular attention to methods, ethics, and identity, while later chapters contain empirical case studies.

Jieun Baek, “The Opening of the North Korean Mind: Pyongyang Versus the Digital Underground,” Foreign Affairs, January/February, 2017, 104-113.  Baek (Belfer Center, Harvard University) profiles media smuggling operations in North Korea’s gray and black markets that, despite threats of harsh punishment, have created “a surprisingly robust network that links ordinary citizens to the outside world through contraband cell phones, laptops, tablet computers, and data drives.” She argues that growing citizen awareness is not a danger to Kim Jong Un in the short-term, but this “digital underground might represent a long-term existential threat.” Support by governments and NGOs for the flow of digital technologies, outside media, and cultural products, Baek concludes, may be the most sustainable and cost-effective way to encourage change from within. The essay is adapted from her book, North Korea’s Hidden Revolution: How the Information Underground is Transforming a Closed Society (Yale University Press, 2016).

Katherine A. Brown, Shannon N. Green, and Jian “Jay” Wang, Public Diplomacy and National Security in 2017: Building Alliances, Fighting Extremism, and Dispelling Disinformation, Center for Strategic and International Studies (CSIS), Washington, DC, January 2017.  In this well-organized 17-page paper, Brown (Council on Foreign Relations), Green (CSIS), and Wang (USC Center on Public Diplomacy) seek to map a public diplomacy course for the Trump administration, grounded on their understanding of PD and lessons learned “in applying PD tools”–primarily those used by “a sound public diplomacy apparatus at the U.S. Department of State” during the Obama administration. The authors summarize successes, challenges, and recommendations in three broad areas: strengthening networks with citizens abroad, weakening violent extremism, and dispelling disinformation by state actors. Their paper knowledgeably discusses important developments within the State Department, but its narrow focus does not include the roles of the Obama White House and numerous other government and non-government actors in the public dimension of US diplomacy.

Keir Giles, “Handbook of Russian Information Warfare,” Research Division, NATO Defense College, November 2016.  In this 77-page monograph, Giles (Royal Institute of International Affairs, Chatham House) “provides an introductory guide to the Russian concept of information warfare, including elements of cyber warfare” for NATO soldiers and officials. Its sections cover concepts and terminology, Russia’s goals and objectives, lessons from the history of Russia’s approach, and possible future challenges. As Giles explains, “two themes occur throughout the handbook: the waging of information warfare during notional peacetime; and the holistic, all-encompassing nature of the ‘information’ that is both the subject and the medium of the conflict.”

The September edition of Bruce Gregory's public diplomacy reading list is now available. Known affectionately at CPD as "Bruce's List," this list is a compilation of books, journal articles, papers and blogs on a wide...

The October 2016 edition of Bruce Gregory's public diplomacy reading list is now available. Known affectionately at CPD as "Bruce's List," this list is a compilation of books, journal articles, papers and blogs on a wide...