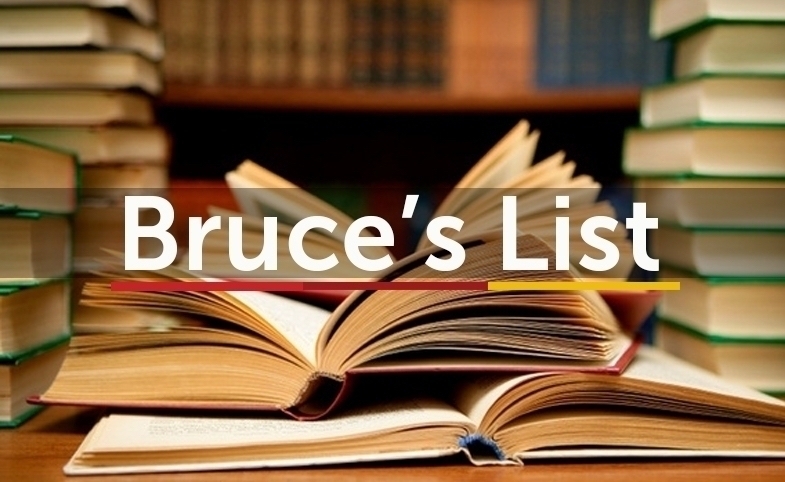 CPD Faculty Fellow Bruce Gregory has compiled a list of the latest must-reads in public diplomacy. Known affectionately at CPD as "Bruce's List," this list is a compilation of books, journal articles, papers and blog posts on a wide variety of PD topics.

Jonathan McClory, lead author, Katherine Brown, and Jay Wang, contributors, “Socially Distanced Diplomacy: The Future of Soft Power and Public Diplomacy in a Fragile World,” May 2021, Sanctuary Counsel and USC Center on Public Diplomacy. In this 53-page report, McClory (Sanctuary Counsel), Brown (Global Ties U.S.) and Wang (USC Center on Public Diplomacy) begin with two questions. What is the future of the global balance of soft power? Are public diplomacy’s traditional strategies and tactics still viable? Their report is based on seven virtual roundtable discussions with policymakers, diplomats and researchers. It begins with a summary of trends shaping a new strategic assessment and how the COVID-19 pandemic has altered perceptions and reputations of major powers. The balance of the report, influenced by Anglo-American perspectives, offers a blueprint for the future. Its chapter on imagining a post-pandemic future for public diplomacy focuses on “the primacy of listening,” more inclusive and diverse target audiences, strengthened public-private partnerships, a hybrid approach to digital and in-person public diplomacy, and a strategy that builds alliances, treats soft power as both reputational and national security, and increases funding for public diplomacy accordingly.

Amanda Bennett, Nicholas Cull, and Richard A. Stengel, “What Should the US Do to Protect Global Media Freedoms?” Walter Roberts Annual Lecture, Institute for Public Diplomacy and Global Communication, George Washington University, April 8, 2021. This year’s Roberts lecture took the form of a conversation with former VOA director Bennett, USC professor Cull, and former Under Secretary of State for Public Diplomacy and Public Affairs Stengel. The lively discussion, followed by audience questions, was moderated by David Ensor, also a former VOA director and now head of the Project for Media and National Security at GWU’s School of Media and Public Affairs. Panelists addressed a range of issues relating to protecting global media freedoms and the role of U.S. international broadcasting services in meeting the challenge. The virtual program can be viewed at the linked video (90 minutes).

CPD Research Fellow Jennifer Hubbert, “Scaling Paradiplomacy: An Anthropological Examination of City-to-City Relations," CPD Perspectives, USC Center on Public Diplomacy, December 2020. Hubbert (Lewis & Clark College) contributes to the growing field of subnational diplomacy in this exploration of cities as diplomatic actors. By paradiplomacy, she means “parallel diplomacy,” a term used in the context of city-to-city engagements. She argues that anthropology is well-suited to illuminate a research area largely influenced by urban studies, international relations, political science, and public diplomacy. Her objectives are (1) to assess relations between paradiplomatic actors who represent cities to broader institutions, practices, and structures of power, and (2) to think broadly about paradiplomatic actors other than elected and appointed city officials. Her paper is drawn from two years of research on Portland, Oregon’s engagement on sustainability and economic development issues with cities in China and Japan. Hubbert used interviews and anthropological methods of immersion and participant observation to explore paradiplomatic practices in sister city board meetings, ceremonial events, Chinese museums, urban development agency meetings, cultural exchange presentations at universities, entrepreneur meet and greets, trade missions, foreign affairs offices in China, and other forums. As with most research on multilevel diplomatic actors, the challenge is to distinguish between diplomacy that serves the public interest, public-private partnerships, and cross-border connections that serve private interests.

Qingmin Zhang, Paul Sharp, and Jan Melissen, eds., “Special Issue: China’s Global Diplomacy,” The Hague Journal of Diplomacy, Vol. 16, Issue 2-3, March 2021. In this timely double issue of HJD, Zhang (Peking University), Sharp (University of Minnesota Duluth), and Melissen (Leiden University and HJD’s Editor-in-Chief) have compiled penetrating research articles, forum contributions, and book reviews by leading scholars on China’s changing diplomacy practices. Topics include China’s diplomacy as a new power in the 1950s and 1960s, its evolving encounters today with the diplomatic norms of Southeast Asian nations, its response to growing demands by Chinese citizens for consular protections, the role of cities in China’s diplomacy, and how China’s public diplomacy is changing. The articles were written by Chinese and non-Chinese contributors. The editors point to implications of their different perspectives and to a shortage of needed theoretical research on China by diplomacy scholars. This special issue demonstrates that HJD, long the gold standard in practitioner-oriented diplomacy scholarship, remains the “go-to” journal in the field. Happily, too, the paywall for all of the articles is unlocked at least for now.