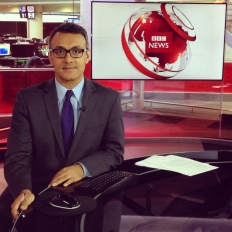 Rajesh Mirchandani is an award-winning BBC journalist with more than twenty years’ experience – and an alum of the Master of Public Diplomacy program at USC Annenberg. Currently based in London as Anchor and World Affairs Correspondent, he spent the years 2007-2013 based in in the United States. In his career he has covered a huge range of stories, from two U.S. Presidential elections to the Haiti earthquake, from AIDS in India to the Chilean miners’ rescue, from the Oscars in Hollywood to storms, floods and hurricanes on both sides of the Atlantic.  During his graduate studies at USC he focussed on the communication strategies of state and non-state actors and the power of social networks as agents of change.