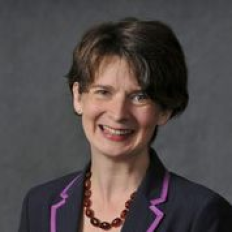 Caitlin Bergin, representing the U.S. Department of State, is a national security affairs fellow for 2014–15 at the Hoover Institution.

Bergin earned an undergraduate degree in history from Smith College and a master’s in international relations from the Johns Hopkins School of Advanced International Studies. She also holds a certificate in Polish studies from Jagiellonian University where she was a Kosciusko Foundation Fellow.  A career diplomat, Bergin was most recently the public affairs officer at the US consulate in Montreal.  She previously served as a policy officer in the Washington-based Bureau of International Information Programs, where she led new and social media outreach strategy for US embassies in sub-Saharan Africa, for which she received the department’s Superior Honor Award.  She also served as the public affairs officer at the US mission to UNESCO when the United States rejoined UNESCO after a nineteen-year absence.  Her other overseas tours include the US embassy in Moscow, and the US mission to NATO in Brussels. As a junior officer, Bergin served in the State Department’s Bureau of South Central European Affairs in Washington.