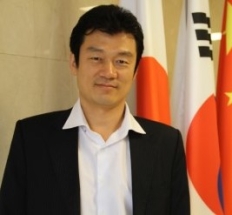 Kwang-jin Choi is the Republic of Korea's Consul General to Erbil, Iraq. Previously, he was the Head of the Center for People Diplomacy in the Republic of Korea’s Ministry of Foreign Affairs. He entered the Ministry of Foreign Affairs in 1996 and has served in the bureaus dealing with trade, regional cooperation and public diplomacy and at the Korean missions in Beijing, Myanmar, Tokyo and Shenyang. He was one of the founding members for the Trilateral Cooperation Secretariat and worked there as Professional Staff for 2 years. Before the current position, he was dispatched as a Deputy Director General for Protocol in the PyeongChang Organizing Committee for the 2018 Olympic and Paralympic Winter Games. He received a bachelor’s degree at Korea University in Korea, an LL.M. (International Economic Law) at Warwick University in the United Kingdom and a Doctoral Degree (Chinese trade law) at Renmin University in China. He was also sent to the University of Southern California in the U.S. as a visiting scholar for public diplomacy. He published a book, People and Public Diplomacy in the 4th Industrial Revolution Age, in Korean.

He can speak fluent Chinese, Japanese and English. As his second language he can speak basic Russian, and is interested in their music. Additionally, he can perform Korean Mask Dance and Korean Traditional Drum.