Home|Peoplomacy vs. Diplomacy: The Diplomatic Evolution 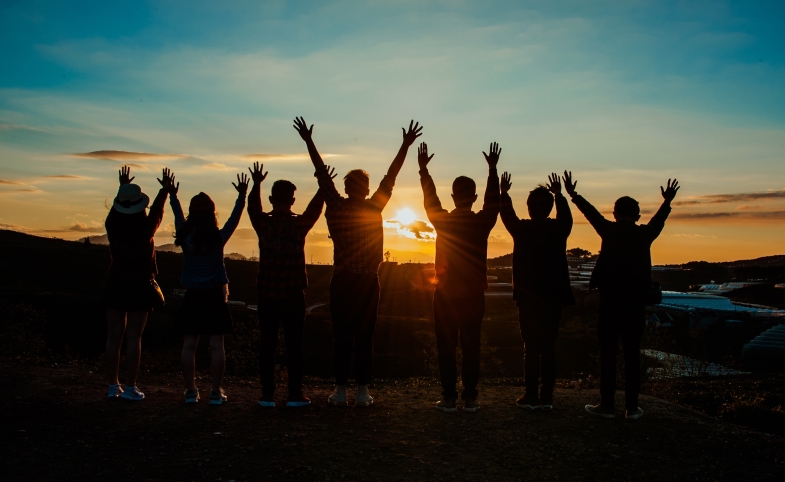 Diplomacy continues to evolve from times past to the present, reflecting contemporary trends of international relations and meeting the political needs of domestic stakeholders. This nomothetic proposition has been proved by a shift from the “conventional diplomacy” conducted between governments to a “public diplomacy,” performed for the foreign public, and a "citizen diplomacy,” which is synonymous with “people-to-people diplomacy” or “people’s diplomacy.”

The key takeaway gleaned from this diplomatic evolution is the persistent emergence and incessant enlargement of the people’s power, which ultimately might herald an era of the people. Now, as democracy is universalized in a globalized world, the subsequent power gains among the people against authoritarianism are working to secure more space in the processes for not only domestic but also international politics. Consequently, the tectonic change in the sphere of diplomacy is expected to grow to embrace the people’s power both globally and domestically.

As introduced by Jan Melissen and HwaJung Kim as “participatory diplomacy” in their CPD Blog post, “Learning from South Korea Diplomatic Experimentation,” South Korea’s “People Diplomacy,” a literal translation of 국민외교 Kookmin Waygyo, is a newly experimented diplomatic trend aimed to meet and reflect the people’s need for the democratization of diplomacy, to facilitate increased engagement in the process of developing new foreign policy by way of collecting the people’s opinions and, most importantly, to provide creative platforms for the people’s participation in various diplomatic processes.

Despite a long history of diplomacy, the people’s voice did not begin to be heard until very recently.

This is a brand new experiment in diplomacy because diplomacy has traditionally been considered the exclusive property of diplomats including royal families, government officials and politicians while the people, on the other hand, have never been the main actors, regarded as outsiders in diplomatic arenas not only historically but also theoretically. Especially with the advent of the so-called Information Age, culminating with the Fourth Industrial Revolution, and in the wake of the aforementioned democratization and globalization trends, the people, including individuals and civil societies, are emerging as the overarching and sometimes decisive actors in international politics. 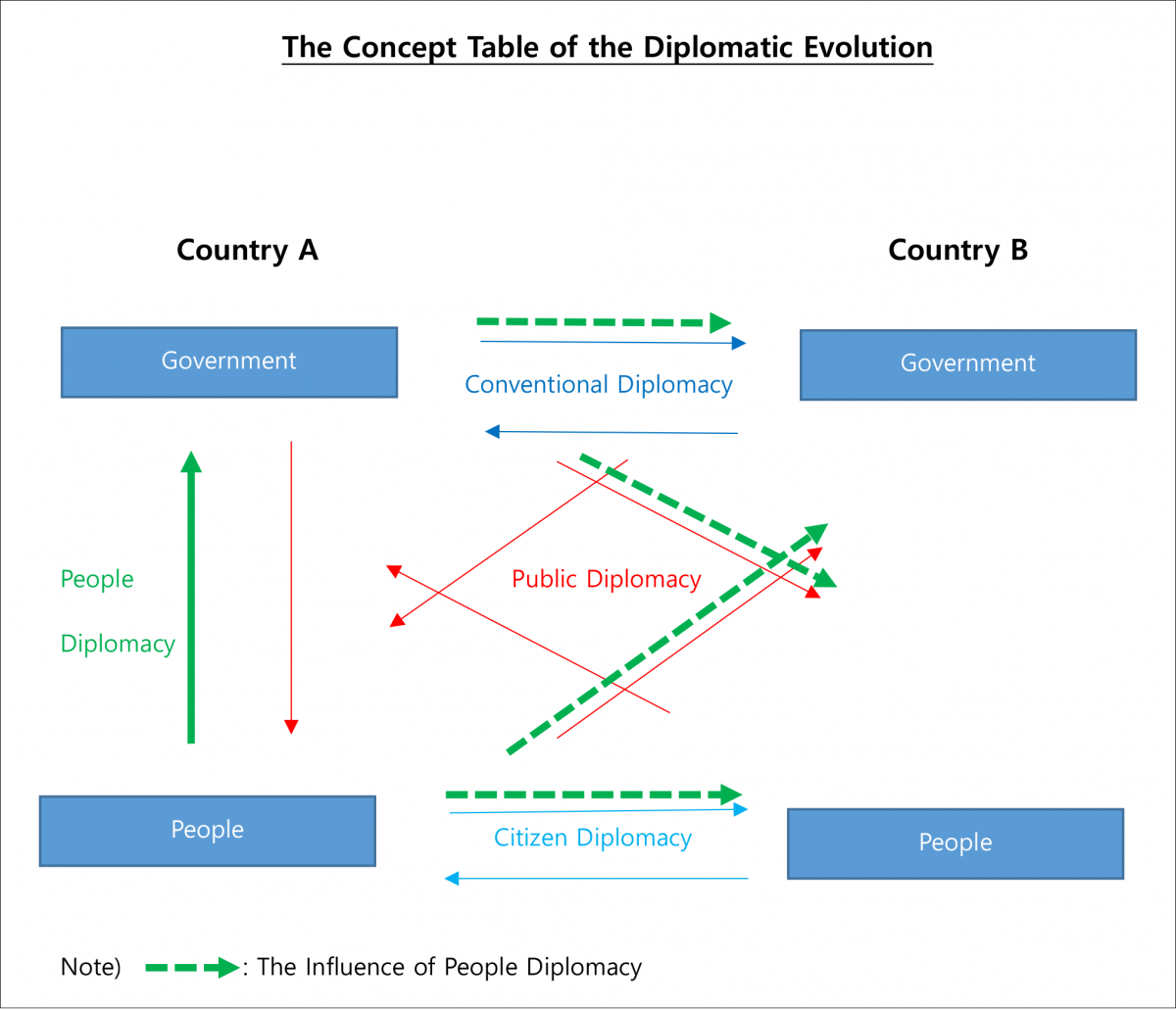 Chart courtesy of the author

First, other diplomacies, by nature, have their foreign counterparts, that is, foreign governments or peoples. But people diplomacy refers to domestic interaction between a government and its own society. Thus people diplomacy is conducted by the people of a country toward its government, whereas other diplomacies are mainly conducted by the government, sometimes in collaboration with its domestic public, toward its foreign counterparts.

Second, the contents of other diplomacies are restricted by the characteristics of their projects and activities. For example, conventional diplomacy is mainly focused on political and economic affairs, whereas public diplomacy is focused on culture and education, knowledge and policy, and citizen diplomacy through mutual exchanges. People diplomacy, however, covers all these areas with no restrictions because the people can suggest any ideas that may be of interest to them regarding any foreign policy, and they can also participate in their implementation, which literally has no limitations assuming the government does not raise any objections.

People diplomacy was selected as one of the Republic of Korea’s six main Ministry of Foreign Affairs (MOFA) policy initiatives in 2017, and for its active and institutionalized implementation and sustainability, the Center for People Diplomacy was established on May 4, 2018. Since then, a plethora of new projects and creative activities engaging everyday people in diplomacy planning, implementation and evaluation have been developed. This makes South Korea’s people diplomacy different from those of other countries, including Australia’s “Public Consultation” and Germany’s “Review 2014.”

Additionally, the sovereignty of the people in South Korea is stipulated in Article One of the Constitution of the Republic of Korea as follows: “The Sovereignty of the Republic of Korea shall reside in the people, and all state authority shall emanate from the people.” In 2016, the world’s eyes focused on the candlelight vigils in South Korea, and the triumphant people’s power laid the foundation for more room for the people’s participation in politics, including diplomacy. According to The Economist’s Democracy Index 2018, Korea ranked 21st, resulting in Asia’s number one democratic country, surpassing Japan as well as the United States.

South Korea’s vision for people diplomacy focuses on securing the democratic legitimacy of foreign policy by obtaining the constituency’s consent through strengthening the people’s participation and expanding communication with the people in the process of foreign policy.

The four objectives of people diplomacy are: to construct infrastructure; to expand communication; to facilitate participation; and to increase the diplomatic capacity of the people.

As for infrastructure construction, the abovementioned Center for People Diplomacy has already been established within the MOFA, and it serves as a bridge and interface between the ministry and the people. More manpower and budget resources are required, however, for full-fledged operation. Consultations and negotiations with the relevant ministries are currently underway.

In order to expand opportunities for communication with the people, on/off-line platforms are being prepared, such as mobile applications and SNS interfaces, seminars, roundtables, town-hall meetings, a National Assembly forum, etc. Especially at the National Assembly forum, lawmakers from ruling and opposition parties showed bipartisan support and declared 2018 to be the first year of people diplomacy.

As for increasing participation, idea contests, open mic forums and opinion polls have been experimentally employed as test projects.

Reminiscent of Sir Harold Nicolson’s indication in his book Diplomacy, public opinion in democratic countries was not focused on foreign affairs until the end of WWI. Put differently, despite a long history of diplomacy, the people’s voice did not begin to be heard until very recently.

Therefore, now is the time not to worry about the side effects of probable populism, but rather to narrow the gap between the government and the people. It is better and more important to open the door to diplomacy for the people by way of removing barriers to access, devising varied platforms, developing skills and searching for the best solutions for diplomacy for the people, by the people and of the people. That is the only way to guarantee the transparency, legitimacy, consistency, credibility and sustainability on foreign policy that leads to the true realization of the sovereignty of people in diplomacy.

The trail of people diplomacy will be blazed by taking the untrodden road creatively and aggressively. Sometime in the future, the neologism of peoplomat for peoplomacy vis-a-vis diplomat for diplomacy will be coined, which might be the final destination of the diplomatic evolution. There will surely be many challenges and opportunities lying ahead. To conquer or to be conquered is the question we are left with to answer.

This article presents the author’s personal view of Korea’s public diplomacy and does not necessarily reflect the Republic of Korea’s official governmental position.

Kwang-jin Choi
Past Visiting Scholar
Republic of Korea Consul General to Erbil, Iraq
YOU MIGHT BE INTERESTED IN...