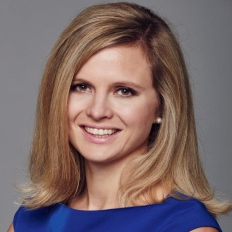 Katarzyna Pisarska is Associate Professor at Warsaw School of Economics and the Founder & Director of the European Academy of Diplomacy in Poland. She is also Program Director of the Warsaw Security Forum and a Young Global Leader with the World Economic Forum in Davos and a CPD Faculty Fellow. In 2013 Dr. Pisarska was named “99 under 33” most influential world foreign policy leader by the Diplomatic Courier in Washington, D.C.

Previously, Prof. Pisarska was a Visiting Scholar at the USC Center on Public Diplomacy (2019), a Fulbright Visiting Fellow at Harvard University (2007), a Visiting Scholar at Johns Hopkins University’s School of Advanced International Studies (2010), at the University of Oslo (2012) and at the Australian National University (2015). In her work, Professor Pisarska combines both her academic and practitioner experience in the field of public diplomacy. She is the author of the book The Domestic Dimension of Public Diplomacy: Evaluating Success Through Civil Engagement (Palgrave 2016). She specializes also in EU foreign policy, Eastern Partnership and EU-Russia relations.