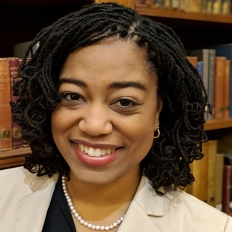 Naima Green-Riley is a Ph.D. Candidate and Raymond Vernon Fellow in the Department of Government at Harvard University. Her dissertation research focuses on U.S. and Chinese public diplomacy, merging theoretical work from the fields of political science, communications and psychology. Through a series of empirical studies, her project aims to explain the individual-level mechanisms through which public diplomacy operates.

Before pursuing her Ph.D., Naima was a Pickering Fellow and a Foreign Service Officer at the U.S. Department of State, where she worked in the public diplomacy cone. Naima was the Public Affairs Officer at the U.S. Consulate General in Alexandria, Egypt during the Arab Spring (2011-2013). She also served as a Consular Officer at the U.S. Consulate General in Guangzhou, China during the Obama administration's "Pivot to Asia" (2014-2015). Naima worked as an intern and an advance associate for the White House in 2010. She contributed to the first ever Forum for Young African Leaders hosted by President Obama, and she worked on subsequent U.S. government youth outreach programming in Africa and the Middle East.

Naima’s writing has been featured in various media outlets, including The Diplomat, Geopolitical Monitor, and Charged Affairs. She has been an invited panelist at the Future Strategy Forum at the Center for Strategic International Studies (CSIS), the George H. W. Bush Conference on U.S.-China Relations, and the Aspen Strategy Group Summer Workshop. Moreover, she has presented her research as a participant in several academic conferences, including those hosted by the American Political Science Association, the International Studies Association, the Peace Science Society, and the Bridging the Gap project at American University. She is a 2017 Ford Foundation Predoctoral Fellow.

Naima received a Bachelor’s degree (BA) in International Relations with honors from Stanford University. She was a Belfer Center International and Global Affairs fellow at the Harvard Kennedy School, where she graduated with a Master’s in Public Policy (MPP). She is proficient in Mandarin Chinese.

The title of Naima’s dissertation project is, “Examining Public Diplomacy Through a Lens of Political Psychology.”