Home|Keep Calm And Carry On

Keep Calm And Carry On 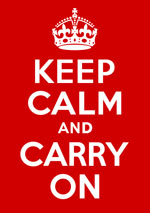 Maybe if I say it enough the phrase will sink deep into my subconscious thereby creating a vast reservoir of perseverance and tranquility. Maybe if I stare deeply into the large lettering and bold red hue my brain will find that elusive unwavering resolve and composure that typifies British culture.

I had this slogan in mind recently as I read through the NSC’s recently released National Framework & Comprehensive Interagency Strategy for Public Diplomacy and Strategic Communications. Initially, there wasn’t much to be surprised or excited about, and on the one hand it is great to see the romantic notions of an effective, stream-lined interagency process revived and underscored. The reality, however, (as anyone who has worked in the federal government and been closely involved with the interagency process can attest) is that the interagency channels are where great ideas, innovation, entrepreneurial thinking and creativity go to die. This is due in large measure to the competing natures of the Cabinet agencies for resources and attention as well as a predominant culture in Washington that attempts to control and direct information flows. But hoo-rah - the NSC report did state that it wanted to foster a “culture of communication throughout the government,” so I worry needlessly. Am keeping calm, and carrying on…

The report also had the requisite focus on creating mutual respect and mutual interest as well as frequently mentioning the need to “synchronize words with deeds” all of which should be second nature to any practitioner of public diplomacy but something the authors of the report felt compelled to emphasize. It seems as though the term listening has lost its cachet as it is nowhere to be found in this report. I was heartened by the focus on global engagement, a key pillar of the Administration’s public diplomacy efforts, and discussion of measurement so that resources can be allocated in alignment with what is most efficient and impactful. I also found it fascinating that the Intelligence Community, which as outlined has the important function of conducting and analyzing foreign public opinion research and monitoring violent extremist messaging and modes, didn’t garner more than a sentence or any further elaboration on their role in the interagency process.

The report ended with a strongly voiced recommendation that no new independent not-for-profit organization for public diplomacy be created. How disappointing to see the NSC dismiss this idea which countless experts have been refining and championing from the Corporation for Public Diplomacy concept that the Council on Foreign Relations initially advocated to the USA World-Trust concept advocated by Kristin Lord, then a Fellow at Brookings:

This report presents concrete steps to strengthen America’s efforts to engage, persuade, and attract the support of foreign publics. As part of a comprehensive plan to enhance our government’s public diplomacy, it urges the creation of a nimble and entrepreneurial new non-profit organization, the USA-World Trust, to complement and support U.S. government efforts.

The USA-World Trust will draw on the enormous goodwill, creativity, knowledge, and talent of the American people and like-minded partners overseas to

• present a more accurate and nuanced vision of America to counterbalance the one-sided views sometimes promulgated by popular culture and foreign media
• contribute to an environment of mutual trust, respect, and understanding in which cooperation is more feasible
• promote shared values and their champions
• inform and support our government’s public diplomacy efforts through the sharing of knowledge regarding communication, public opinion, foreign cultures, and technology.

Try as I might, it is hard to remain calm and carry on when one sees the wheel being reinvented over, and over, and over again. And I am, at my core, an optimist. There is much deep, critical thinking that has been captured with regards to public diplomacy and strategic communications since 9/11; my question is: why don’t we just use even some of it and get on with the task at hand? How America leverages its public diplomacy assets and engages with the world is a critical issue for our time and one every American citizen should be concerned with. It has far-reaching implications for our national and economic security. It will take steadfast, courageous leadership from the highest levels to implement changes so desperately needed in the public diplomacy realm.

I am reminded of one of my favorite Churchill quotes (which, ironically, many use to describe our President): “The first quality that is needed is audacity.”

The Keep Calm poster was created for motivational purposes by the British Ministry of Information and ironically never used as it was seen as a “last case scenario" to be used only should the Nazis succeed in invading Britain via Operation Sealion, in order to stiffen resolve. The slogan -- one of three created, were intended as "a rallying war-cry that will bring out the best in every one of us and put us in an offensive mood at once." These particular posters were designed as "a statement of the duty of the individual citizen."

We could use a little more audacity coupled with a stiffened resolve and a rallying cry for public diplomacy here in America.