Home|Public Diplomacy and Journalism: A Project for a New Libya 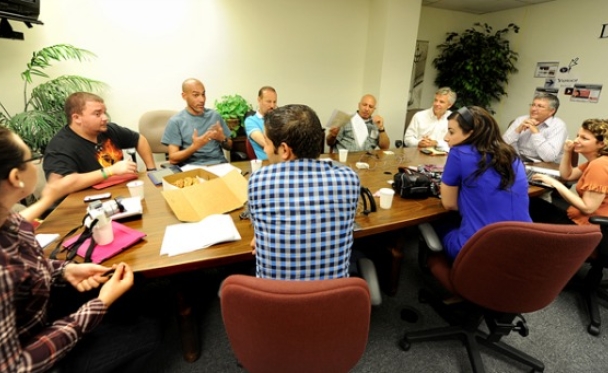 Public Diplomacy and Journalism: A Project for a New Libya

The USC Center on Public Diplomacy and the International Visitor Leadership Program hosted a small round-table conversation about public diplomacy and the role of journalism in post-Gaddafi Libya with a group of seven Libyan reporters and media professionals.

CPD Director Philip Seib discussed the creation of news content and public diplomacy with the Libyan journalists who were selected by the late Ambassador Christopher Stevens in conjunction with the U.S. Department of State's Bureau of Education and Cultural Affairs.

During their visit to the United States, participants met with various scholars, practitioners, journalists, media outlets in Washington, D.C., New York, California and Nevada about best practices and the challenges they faced in their profession.

Philip Seib noted, “Libya faces a long and difficult path to democracy, and the work of these and other journalists will be essential on that journey. We were delighted to have them as our guests, and I hope they learned as much from us as we did from them.”