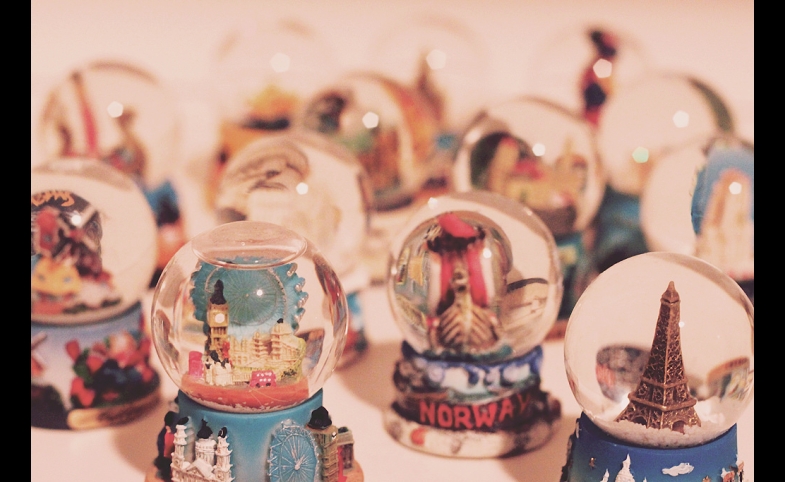 The role of country images and knowledge of their constitution and effects is of major interest not only for scholars and professionals in the domain of public diplomacy, but also for various adjacent fields such as international relations, international marketing, or inter-group relations. As an antecedent of people’s behavior, country images influence:

Under the conditions of a globalized world and modern media societies, the image of countries is becoming more important compared to territory access and raw materials. As a result, leaders around the world are increasingly concerned about their country’s esteem abroad. This has led to an institutionalization of image and communication management practices in various countries, as quantitative measures, indices, and rankings for country image, brand, and reputation have become tremendously popular.

It is still an open question how...to develop a comprehensive model of the country image suitable for analyses in public diplomacy.

Research domains such as marketing and social psychology have devoted considerable empirical attention to understanding the constitution and effects of country images from their field perspective. In public diplomacy, however, there is no widely accepted model and measurement instrument available. While the practitioner literature strongly relies on aggregated indices (such as the Nation Brands Index, Best Country Score, or Country RepTrak), academic literature (much like the seminal works of Kunczik or Nye) so far favors a conceptual or historical focus. It is still an open question how the available empirical approaches from other domains, such as marketing, PR, and social psychology, can be gainfully applied to develop a comprehensive model of the country image suitable for analyses in public diplomacy. Such a model is needed to clarify the constitution of this central target construct in public diplomacy and understand how its different dimensions interrelate and affect each other and how they may ultimately lead to the facilitation of behavior in investment, consumption, political support, or travel and cultural exchange. 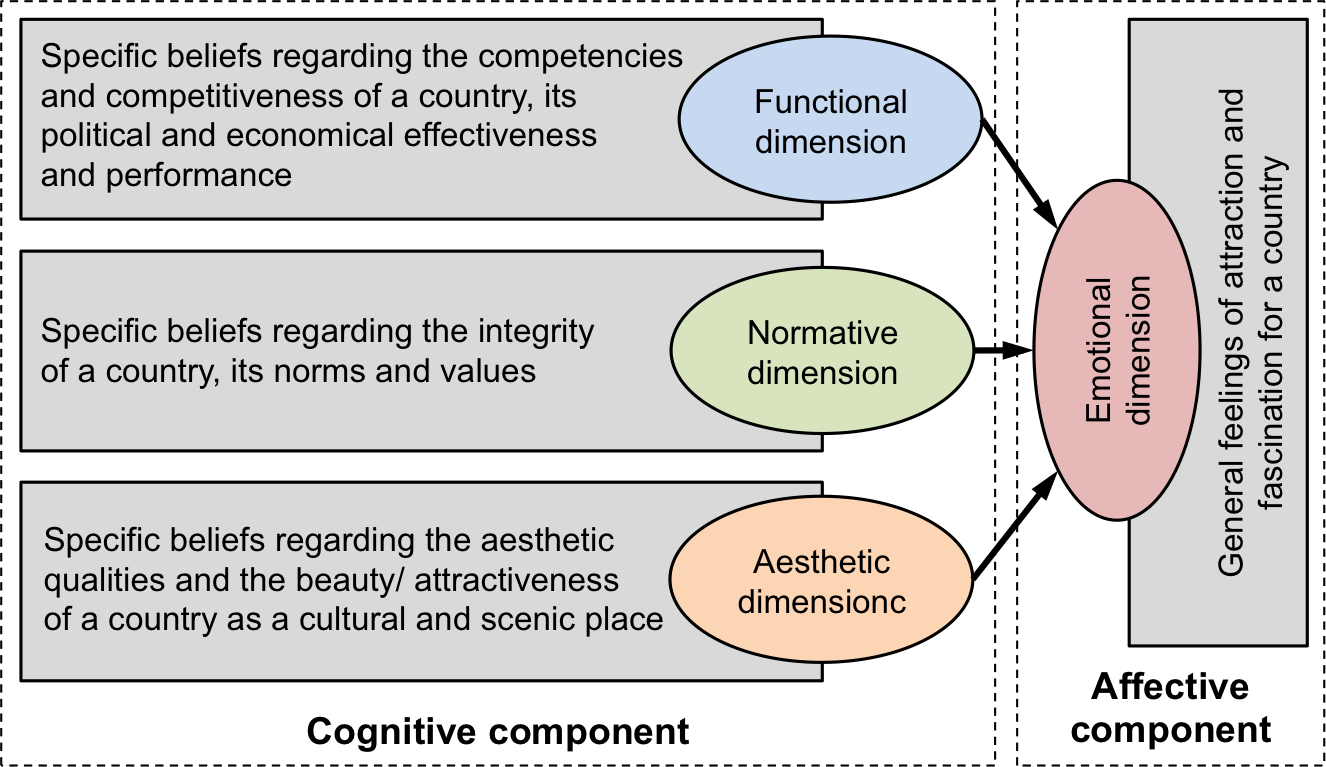 To work towards a new model, researchers and professionals in public diplomacy can draw on and combine established approaches from specialized fields such as attitude theory, national identity theory, and reputation management. As an attitudinal construct, the country image can be conceptualized based on Ajzen’s two-component model of attitudes, comprising of cognitions (specific beliefs) and an affects (general feelings) about a county. In his seminal theory in National Identity, Smith describes countries as named human collectives consisting of a distinct territory or homeland, common history and traditions, a domestic economy, a public culture, a set of common norms and values as well as a sovereign political organization or state. When combining Smith’s model with a common differentiation of image dimension used in reputation management, the attitudinal construct of the country image can be defined as consisting of four different but closely interrelated dimensions: a functional, a normative, an aesthetic and an emotional dimension (see Figure 1 above, c.f. Buhmann & Ingenhoff 2015; Buhmann 2016, pp. 40–45).

The functional country image dimension, which covers beliefs regarding the competitiveness of a country, is specified with reference to Smith’s attributes of national economy and political organization. It consists of beliefs regarding the state of the economy and national businesses, the competitiveness of a country’s products and services, its labor markets and educational system, the competencies and effectiveness of the political system as well as the country’s performance in research and technology.

The normative country image dimension, which covers beliefs regarding the integrity of a country, is specified in relation to Smith’s country attribute of norms and values. This dimension consists of specific judgments regarding both the social and the ecological responsibility of a country.

Finally, the emotional country image dimension, which constitutes the effective component of the country image construct, consists of general feelings of liking and fascination for a country. It is thought of as an outcome or result of the cognitive beliefs that people hold about a country.

Figure 2: Analyzing the constitution and affects of the country image using the “4-D Model” 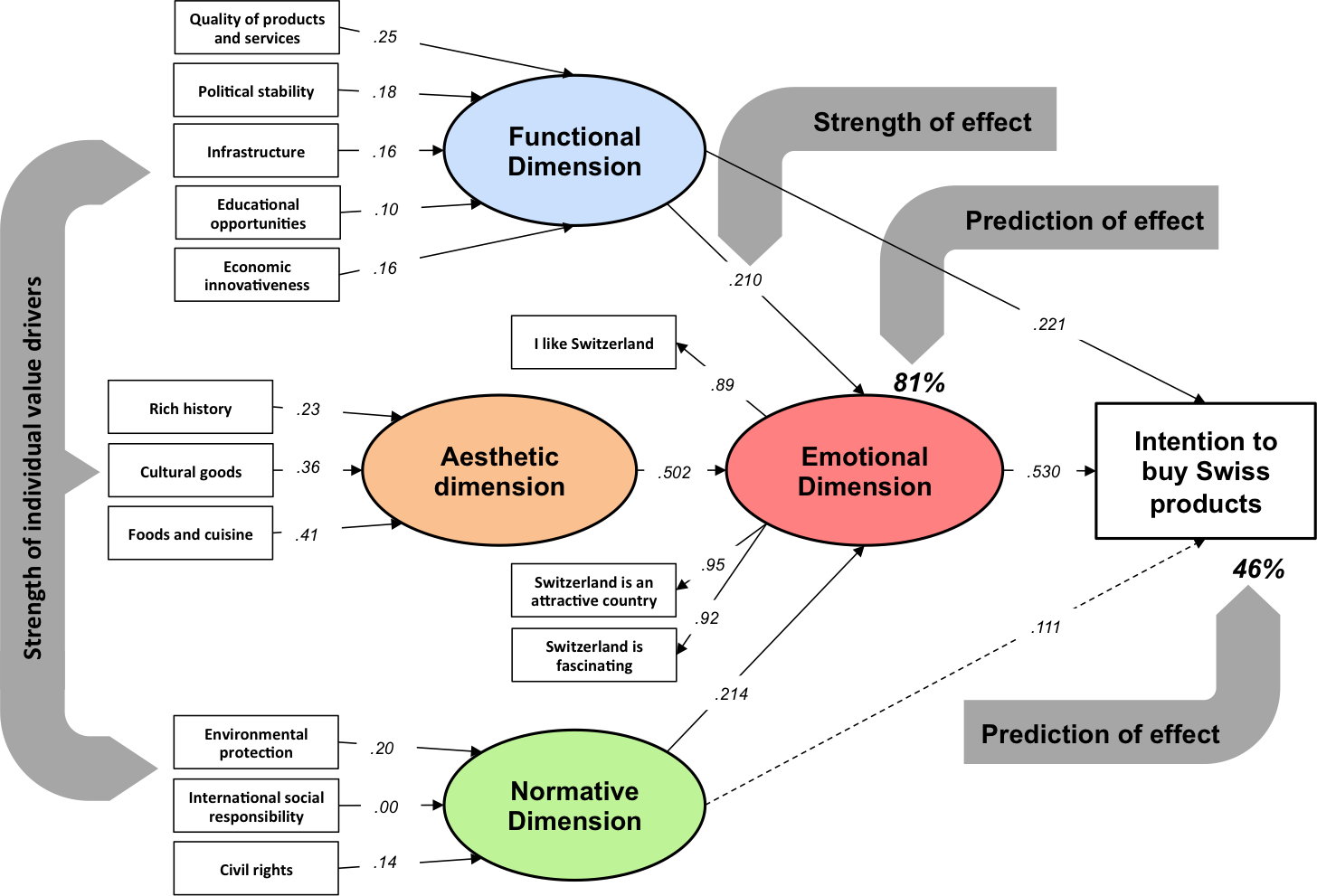 This four-dimensional model can be empirically applied using survey instruments. Based on respective data, statistical analyses (using Structural Equation Modeling) can show how functional, normative, and aesthetic beliefs about a country affect the formation of the emotional country image dimension—showing the country’s “ability to attract”. Furthermore, we can see how the emotional dimension of the country image mediates the effect of the cognitive dimensions on people’s behavior. Such behavioral effects can be analyzed regarding a wide variety of outcome variables such as the willingness to politically support a country, invest in a country, or travel to a country.

The empirical example in Figure 2, taken from Buhmann (2016), shows how the country image of Switzerland and its individual dimensions influence people’s intentions to buy Swiss products. In this case the aesthetic dimension is strongest in forming emotional attitudes towards Switzerland, while all three cognitive dimensions (functional, aesthetic, and normative) jointly explain over 80% of the variance in the emotional dimension. The latter is strongest in influencing people’s actual intention to buy Swiss products, followed by the functional dimension of the Swiss image. Additionally, the values for the various “cause indicators” of the three cognitive dimensions show which items are the strongest “value drivers” of the Swiss country image and thus contribute most strongly to the formation of the overall image and its effect on behavior in the analyzed group.

This example shows how the “4-D Model of Country Image” and a respective survey instrument provide a novel approach for county image analyses in public diplomacy research. Furthermore, such analyses can enrich insights and monitoring in public diplomacy practice and help improve the development and evaluation of cross-national communication strategies.