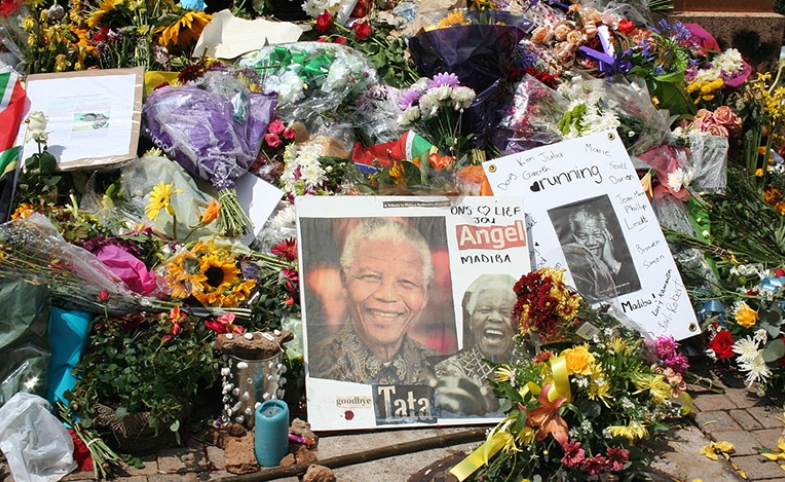 Nelson Mandela may have died on December 5, 2013, but his legacy lives on. He changed the image of South Africa from that of a country despised for its atrocities to a “Rainbow Nation” (Archbishop Desmond Tutu’s term) that protects and promotes human rights and democratic values. UN Secretary-General Ban Ki-moon stated that “the Truth and Reconciliation Commission (TRC) established under Mandela’s leadership remains a model for achieving justice in societies confronting a legacy of human rights abuses.” Mandela’s government enhanced its image, legitimacy, and international influence through the power of “attraction and co-option rather than coercion,” to borrow Joseph Nye’s terms.  In the late 1980s, when political figures in the U.S. were still insisting that Mandela’s greatest contribution was "where he stood in the standoff between Washington and Moscow," millions of Western citizens insisted that the South African TRC proved that even if the African National Congress was influenced by communism, it could still pursue freedom, justice, and human rights.

While the Truth and Reconciliation Commission was designed primarily to address domestic crises and help with the peaceful and democratic transition of the government, it helped South Africa re-brand itself globally and gain respect, support, and legitimacy by enhancing its soft power.

Mandela encouraged other nations to resolve conflicts through diplomacy and reconciliation based on the same constitutional clause of The Republic of South Africa that directed the Truth and Reconciliation Commission to push for "understanding but not for vengeance ... for reparation but not for retaliation... for ubuntu but not for victimization." As Desmond Tutu explains, for South Africa, "to forgive" was not "just to be altruistic." It was “the best form of self-interest.” It was a way to advance its foreign policy objectives while unifying and strengthening the South African nation domestically. The Truth and Reconciliation Commission served Mandela’s government as an essential public diplomacy tool in the following ways:

In his speech upon his release from prison in 1990, Mandela claimed that with democracy there would be no need for violence; when he took over the government, he proved himself correct, showing that various movements and active groups such as the ANC would renounce violence under a democratic regime. The TRC, which was in line with both Mandela’s philosophy and international liberal expectations, was solid evidence of the new government’s efforts to institutionalize peace and human rights with a global perspective, enhance international standards, and maintain its legacy by peacekeeping.

Through the TRC, South Africa told its own story to the world
The TRC embarked upon creating a “collective memory” for the nation by classifying and documenting the experience of its people under apartheid rule. This was not a mere chronicle of who was treated in what way; rather, it was an influential and "authoritative description" of the nation’s history. This record makes it impossible for anyone to deny the crimes that took place in South Africa under the Apartheid regime and tells a compelling story about a nation that is coming together to heal its wounds. As South African Politician Alex Boraine noted, the commission issued press releases on hearings, amnesty decisions, and other relevant information, and provided it to national and international news agencies and journalists who promulgated the story.

The extensive and systematic use of media paid off; domestically, although the results are subject to debate, the devastating stories that were shared through various media opened the eyes of many to painful facts about their country’s history, which encouraged a sense of unity and shared destiny. But the global impact was much bigger: the commission was widely appreciated and supported all around the world; people seemed to be interested in the stories about “a healing truth in South Africa.” According to The Independent, "with the exception of the atrocities against the Jews during the Second World War, there is no evil that has been as condemned by the entire world as Apartheid."

Branding the “Rainbow Nation” through the TRC
The post-Apartheid government in South Africa presented a new image of the country to the world: “the Rainbow Nation” that was based on unity, equality, and respect for all regardless of their ethnicity, religion, race, and gender. For the first time in its history, a black person was democratically elected to be the president of South Africa. The post-Apartheid cabinet was also a diverse group. Through the TRC, Mandela emphasized not only forgiveness, but also the importance of national unity and integrity in facing international threats to the country’s sovereignty and economy in a post-colonial situation.

It is quite remarkable that Mandela, once branded an “official terrorist” in the United States, later became respected globally as a visionary leader, and a believer in democracy and human rights, to the extent that no Western power could turn against him despite his frequent blunt criticisms of countries such as the United States. While the Truth and Reconciliation Commission was designed primarily to address domestic crises and help with the peaceful and democratic transition of the government, it helped South Africa re-brand itself globally and gain respect, support, and legitimacy by enhancing its soft power. This in turn allowed for the increase of international collaboration and trade with South Africa as a rising middle power and its growing diplomatic influence.

In the wake of Fidel Castro's death, his legacy is being fiercely debated, caught between opposing camps that see him as a liberator or a dictator. Among his more vocal defenders have been a number of African states, notably...

Daniel Whitman is Assistant Professor of Foreign Policy at American University's School of International Service. He is the author, most recently, of Outsmarting Apartheid: An Oral History of South Africa's Cultural and...