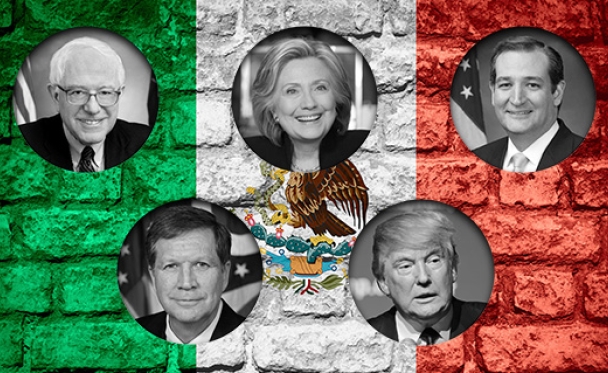 The relationship between the United States and Mexico will likely be transformed depending on who is elected President of the U.S. this fall. On March 29, Arturo Sarukhan (former Mexican Ambassador to the U.S. and CPD Distinguished Fellow), León Krauze (journalist, author and news anchor), and Pamela Starr (Director, US-Mexico Network @ USC and Associate Professor, Public Diplomacy and International Relations, USC) unpacked the rhetoric that has been used by both democratic and republican candidates.

Panelists addressed U.S.-Mexico bilateral ties; how Mexico perceive the U.S. at this juncture; how the campaign impacts the bilateral agenda; and the public diplomacy footprint that impacts future relations between the U.S. and Mexico.

The panel was moderated by Tom Hollihan, professor of communication at the USC Annenberg School and CPD University Fellow.

Ambassador Sarukhan is an international strategic consultant and advisor based in Washington, DC. He is currently a Distinguished Fellow at the USC Center on Public Diplomacy. A career diplomat, Ambassador Sarukhan served for 20 years in the Mexican Foreign Service and most recently served as Mexican Ambassador to the United States from 2007 to 2013. Previous positions included Deputy Assistant Secretary for Inter-American Affairs, Chief of Policy Planning at the Foreign Ministry and Mexican Consul-General to New York City. He tweets at @Arturo_Sarukhan. More

León Krauze is an award-winning Mexican journalist, author, podcaster and news anchor. For almost twenty years, he has followed politics in the United States, having covered the last four election cycles for various media outlets, both in America and Mexico. In 2005 he published La Casa Dividida, an account of the first five years of the Bush presidency.

Krauze is currently the main anchor at Univision’s Los Angeles station, KMEX, where he hosts the nation’s highest rated news shows, regardless of language. His work has been published in Foreign Affairs, The New Republic, Foreign Policy, El Pais, Letras Libres, among many others. He’s currently a frequent contributor at The New Yorker, The Daily Beast, and a weekly columnist for Mexico’s El Universal. He will soon publish La Mesa: Historias de nuestra gente, a book that compiles fifty remarkable profiles of Hispanics in America. He tweets at @Leon_Krauze.

Dr. Pamela K. Starr is Director of the US-Mexico Network @ USC, an associate professor (NTT) in Public Diplomacy and the School of International Relations, and a university fellow at the USC Center on Public Diplomacy She came to USC from the Eurasia Group, one of the world's leading global political risk advisory and consulting firms, where she was senior analyst responsible for Mexico. More

Dr. Tom Hollihan publishes in the areas of argumentation, political communication, media diplomacy, contemporary rhetorical criticism, and the impact of globalization on public deliberation. He is the author of several books including: The Dispute over the Diaoyu/Senkaku Islands: How Media Narratives Shape Public Opinions and Challenge the Global Order in 2014, Uncivil Wars: Political Campaigns in a Media Age, among others. Professor Hollihan served as the associate dean for academic affairs in the Annenberg School for Communication and Journalism from 1997-2007.  He currently chairs the Executive Committee of the USC US-China Institute. More

Can Public Diplomacy Help Bridge the Gap Between Reality and Perceptions?