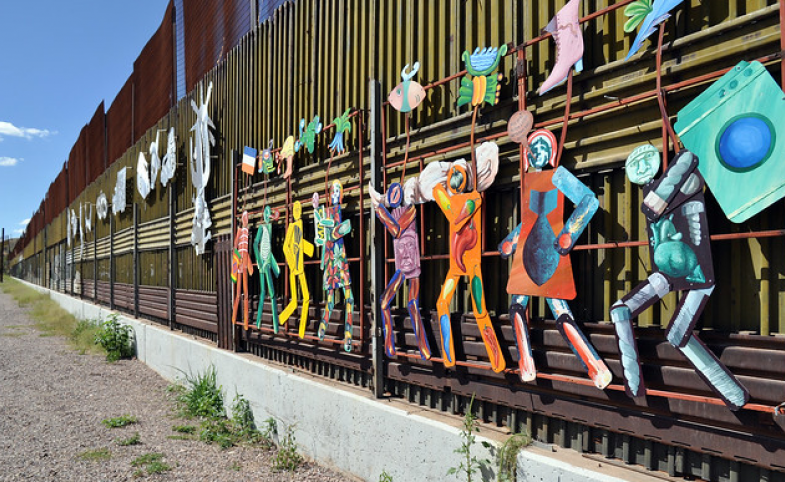 The large number of Central American migrants crossing Mexican territory in caravans to reach the U.S. offers Mexico with an opportunity to handle the issue in accordance with its international commitments. It can also benefit the new administration’s image and promote the country’s principles for a more humane migration. Yet, President Trump's attempts to coerce Mexico in stopping migrants poses challenges to its southern neighbor, hindering its efforts to conduct its human rights-based foreign policy. As Mexico wants to change its narrative and become a leading actor in global migration policies, the country needs to do a balancing act between following its international commitments and giving in to Trump’s pressures.

Since the onset of his new administration, Mexican President Andrés Manuel López (AMLO) has faced the challenge of handling thousands of migrants from Central America crossing in caravans into Mexican territory in order to reach the U.S. This problem was also faced by the previous administration of President Enrique Peña Nieto. However, AMLO has given Mexico’s foreign policy a nationalist twist—he maintains that “the best foreign policy is the homeland policy”—and when it comes to migration policies, he insists that Mexico will make decisions in a sovereign manner. All of this while trying to carry out friendly relations with the U.S. This approach differs starkly to that of his predecessor.

Although Peña Nieto let the first caravans into Mexico and offered migrants asylum status, he also decided to send a small contingent of unarmed federal police forces to the Guatemalan border. In the government’s narrative, the move responded to an effort to contain them in a “pacific” and “orderly” manner. However, Mexico’s enforcement action was seen as a hardline measure, carried out in response to U.S. pressures.

As violent incidents occurred, the order that the Mexican government sought to achieve along its southern border was contested with images of chaos from the clash between officers and migrants. Headlines in various U.S. media announced that the caravan was stopped, and President Trump thanked the move in a tweet.

Conversely, AMLO welcomed the caravans and issued migrants with humanitarian visas. He has also pledged to grant them with temporary work visas and stated that Mexico will guarantee the migrants’ entry with order, security and respect. As observed by Rodrigo Dominguez-Villegas, Mexico’s migration policy is hence transitioning from an emphasis of enforcement to one of protection. In this sense, AMLO’s administration is averse to both securitizing the border and to the risk of violence that can result from long delays in the asylum status application process. In doing so, AMLO is also avoiding broadcasting images of violent incidents between Mexican police officers and migrants—which could hurt the government’s image—and plans to avoid human rights violations perpetrated by state forces under previous administrations.

Now that Mexico seems eager to share its vision for a humane migration, there is a chance to gain moral authority against Trump’s hardline immigration policies.

Mexico’s insistence in an orderly, secure and human rights-based migration comes from its constitutional principles to protect human rights and the country’s international commitments, most notably to the UN’s Global Compact for Safe, Orderly and Regular Migration. The Global Compact is an international framework meant to improve cooperation on migration issues. It addresses migrants’ contribution to development and advocates for the protection of their human rights. Mexico has been an active player in the Compact’s design, and is seen as the main contributor to its human-rights based approach, drawn from its long experience with border and migration issues with the U.S.

However, as in the previous administration, AMLO’s government has to deal with Trump’s pressures inducing Mexico in adopting a securitized approach and stopping migrants going north. In only two months, the U.S. President went from threatening to close the border to retracting this statement—after warnings of the potential economic impact on U.S trade—and more recently, to threatening to impose tariffs on vehicles imported from Mexico.

Besides dealing with U.S pressures, Mexico needs to pay attention to criticisms in regard to its cooperation with U.S. policies to deter migration from Central America. During the past administration, there was a widespread perception that Mexico did the “dirty work’ of the U.S. by stopping migrants south of its border. AMLO’s government vowed to distance itself from previous policies and handle migration differently. Yet, the Mexican government’s acceptance of allowing migrants seeking asylum in the U.S. to wait in Mexico during the delay of their procedures is indeed perceived as being cooperative with Trump’s hardline policies. Although Mexico’s government tried to distance itself by stating that the U.S. acted unilaterally, the White House rebuked by affirming it was a negotiated policy.

In addition, the new administration does not escape from the criticism of dodging international law commitments. For instance, the Mexican humanitarian visas issued are also seen as a means of deterring migrants from applying for asylum. Similarly, the deportation of migrants back to their countries has been viewed in violation of the non-refoulement principle, which prohibits the return of people to a real risk of persecution or other serious human rights violations. But according to AMLO’s own standards, would such a homeland policy not make a bad foreign policy?

Striking a balance between achieving its new migration policy and facing Trump’s pressures is a complex task for Mexico. But now that Mexico seems eager to share its vision for a humane migration, there is a chance to gain moral authority against Trump’s hardline immigration policies. Mexico should not only continue to assert its international commitments, but also apply them domestically if it is to become a leading actor in global migration policies.

America: Mexico has your back!

The Truth About Us is a Mexican campaign that seeks to highlight the beneficial relationship between Mexico and the United States. The video below is a part of this campaign. Hosted by Agustín Barrios Gómez, a...

Donald Trump’s recent incendiary statements against Mexican immigrants and regarding U.S. trade relations with Mexico seem to have shocked many in the U.S. Both issues are pillars of Mexico’s foreign policy to the U.S., for...