Home|Talk D.C. to Me: Presidential Code-Switching 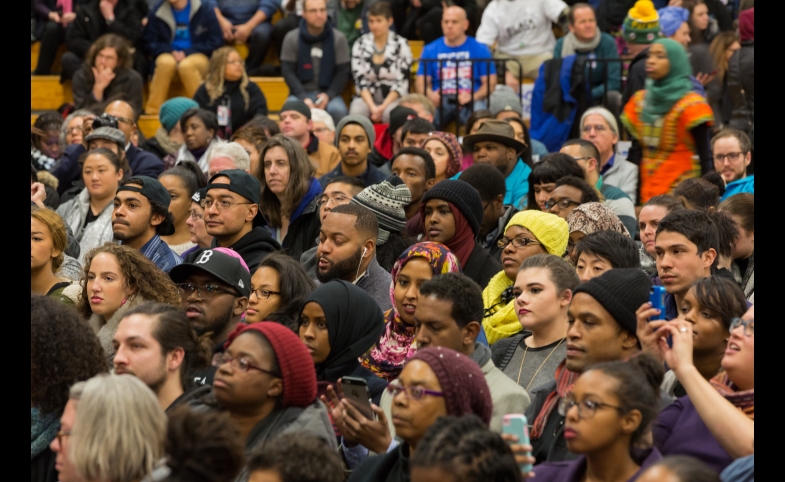 American presidential speech has long been expected to contain a degree of versatility. Candidates, and later presidents, need to sound competent on the political front yet remain in touch with the average citizen. The latter has presented different requirements than the former. Speech contains a great deal of information that goes above and beyond its semantic content, intentionally or not. Gender, approximate age, race/ethnicity, and social class can be projected through dialect choice (insomuch as dialect can be a choice); thus, language serves as a marker of identity and allegiance. To this end, linguistic flexibility has been utilized far more than linguistic purism. This has led to what linguists refer to as situational code-switching—that is, alternating between dialects to suit the intended audience. While the accepted professional norm of English in the U.S. is Standard American English, or SAE, we are witnessing increasing deviation from this standard.

The current field of candidates (or at least, the Final Four) features just one SAE speaker.

It is important to note that the political risks of code-switching are high, particularly the use of ethnic-based dialects, and there are certainly cases where code-switching has proved detrimental, in terms of backlash from both the public and from governmental bodies. I do not concern myself overmuch with the effectiveness of code-switching, but rather its rise in usage. Its prevalence could be explained by the increases in mobilization of minority groups, linguistic federalism as a tool to reach across social cleavages, and the competitive culture of politics (simply put: a predecessor’s new frontier is the current president’s benchmark). And naturally, the emerging “generation of new voters and multicultural voices” is changing the American political landscape. In particular, bilingual code-switching to reach immigrant and diaspora groups is becoming more common, as evidenced by George W. Bush and Hillary Clinton’s forays into Spanish—and despite accusations of being merely “easy symbolism,” the trend continues.

Examining the evolution of the American rhetorical presidency, these emerging new standards of speech will be of interest to scholars, as they reflect shifting public attitudes of what constitutes electability and methods of gauging presidential character. If the president is a representative of the public consciousness, then the prevalence of code-switching demonstrates new public values: namely pluralism, diversity, and cultural awareness.

While previous presidents dabbled in code-switching, Obama realized the ideal. His regional code-switching ranged from Hawai’ian to Chicagoan modes of speech, reflecting his geographically diverse life experiences and encompassed America as a country; his ethnic code-switching drew on African-American Vernacular English (AAVE), often using SAE with AAVE-based rhetoric, intonation, and style rather than grammar; and his successful utilization of generational code-switching through slang helped him win the largest-ever youth turnout. Supporters and opponents alike agreed that his linguistic fluidity was masterful. He regularly “switched back and forth between multiple ways of speaking—without devaluing any of them. It is in this sense that he serves as a linguistic role model” for the future of American politics.

The 2016 presidential election is breaking ground on multiple fronts, and language is one of them. The current field of candidates (or at least, the Final Four) features just one SAE speaker—Hillary Clinton—and she is characterized by her frequent stylistic shifts. Ted Cruz utilizes the Southern dialect (despite not being a native speaker) and some limited Spanish, though he relies on the former far more than the latter. Both Donald Trump and Bernie Sanders have opted to retain the New York accent (Queens and Brooklyn dialects, respectively) throughout their careers, and show no signs of changing into ASE for the presidency.

Dialects carry connotations. As reporter Jeff Guo explains, “people do not perceive the New York style of speaking as particularly attractive or high-status,” which is fitting given that both Sanders and Trump are running as political outsiders, but the dialect does have connotations of “competence, aggressiveness and directness.”

Since the differences between SAE and other English dialects are mainly morphophonemic, the choice to use one over the other is rarely an issue of intelligibility. SAE is the dominant dialect in schools, media, and professional life, and is understood by all English speakers in America. One would think that political speech strategies would thus focus on using this mutually-understood form of English as a unifying factor, but it is not so. Alternate dialects carry cultural identities and implied social values. Moreover, presidential code-switching resonates deeper with the electorate simply because it’s the president. They have distinguished careers within the professional realm, meaning they have a complete mastery of ASE, and thus their straying from it carries a very different message than the average citizen’s use of code-switching might. The public knows that presidents are capable of SAE, or “proper English,” so their deviation gives them a certain covert prestige. Code-switching functions as a method of convincing listeners that they have caught a glimpse into a president’s “true” self. This is not to imply that political gains are the sole motivation behind presidential code-switching. Language is a central part of one’s identity; it may be that they are simply trying to maintain their roots. But it’s impossible to ignore the fact that for the past few decades, the warmer-sounding candidate has consistently won the presidency.

Dialectal purism has become obsolete, and politics is a game of adapt-or-die. Future candidates will be expected to code-switch in order to connect to diverse audiences. This could manifest itself in a variety of ways. We’ve already seen the emergence of “proxy” speakers for dialects that a candidate is underqualified to utilize themselves; take rapper/reggaetonero Daddy Yankee’s appeals to the young Latino electorate on behalf of McCain during the 2008 election, rapper Killer Mike's AAVE-inclusive speeches in support of the Sanders campaign, or even the classic North-South dialect pair for the presidential and vice-presidential candidates on the ballot. Future presidential candidates might also be incentivized to draw on more diverse life experiences, or even come from a more diverse selection pool. Though SAE is still the dialect in which politics are conducted, it's no longer the dialect in which hearts and minds (and subsequently, elections) are won.

Photo by Tony Webster I CC 2.0