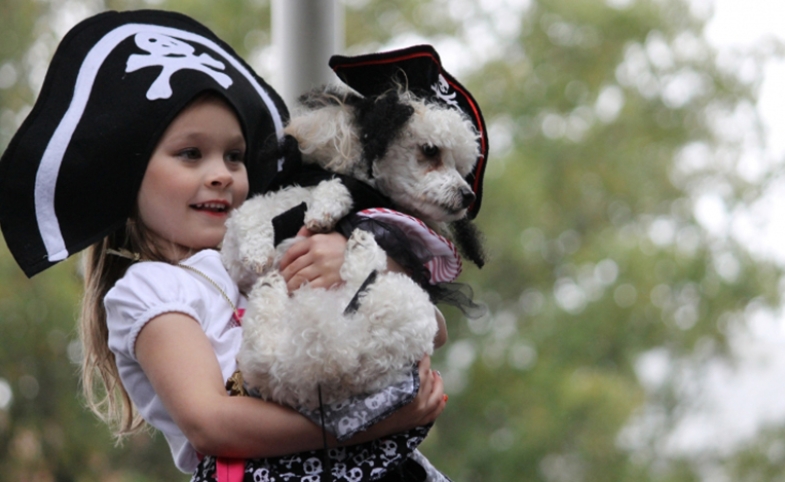 The origins may be Celtic and the etymology may be English, but Halloween as we know it is an American creation. The holiday originated as the seasonal festival of Samhain, and later merged with the Catholic notion of All Saint’s Day (or All Hallow’s Day). European colonists brought the practice to the Americas, but it wasn’t until the increased Irish migration of the 1840s that it became widespread within the United States. Even so, it remained largely a seasonal festival, marked by dinners and soirees, with some added indulgence for children’s pranks.

The addition of costumes, doorbell-ringing and treats for children appeared for the first time in the 1930s and early 1940s throughout America. By the late 1940s, trick-or-treating had gained national acceptance, but it wasn’t until the 1950s that candy became associated with the practice, thanks to an enterprising sweets industry.

But trick-or-treating is just one facet of Halloween. Bars, hotels, museums, and other venues routinely put on costume parties for the adult crowd, with Halloween reported to be a principal party night in the U.S., second only to New Year's Eve. Halloween parades such as the one in New York’s Greenwich Village close down streets for the night. Amusement parks transform for the month, an industry of haunted houses pops up, schools hold costume contests, local shops hand out treats to customers, and homes across the country are decked out in false cobwebs and jack-o-lanterns. The national Halloween economy might pale in comparison to that of Thanksgiving or Christmas, but it still reaps nearly seven billion USD each year.

The holiday can also claim it’s own cultural output. Americans flock en masse to the ritual horror movie releases for the month of October, and the holiday has left its mark on American cinema through classics such as It’s the Great Pumpkin, Charlie Brown, Hocus Pocus, The Rocky Horror Picture Show, and of course, Halloween. TV shows from the Simpsons to Grey’s Anatomy will feature a Halloween episode. From Michael Jackson’s Thriller to contemporary Snapchat filters, the holiday is part of the pantheon of American cultural products. And the dominance of American culture has exported this precise product to global audiences. Mexico, though it retains Day of the Dead, has started celebrating the American-style Halloween as well, with costume parties and trick-or-treating. And not even the heightened security climate has dampened France’s enthusiasm for its annual Zombie Walk, set for the week of Halloween. Japan has embraced the party aspect of the holiday, most notably with an annual bash in Shibuya, Tokyo that features over 90 events in the area. South Africa’s Cape Town in 2016 celebrated its twelfth year of a week-long Halloween horror film festival, which also includes a costume contest and a club scene. The list goes on.

It is precisely the syncretism of Halloween that represents the best of America.

Halloween is just amorphous enough to hold a broad cross-cultural appeal. Whether global audiences are looking for a seasonal marker, a night of pranks, a celebration of mortality or simple self-indulgence, they can find it and emulate it. Increasingly, the holiday is being considered independent of its origins—both as a harvest festival and a Christian reflection of death—and embraced in its uniquely American form. Most cultures have their own traditions surrounding seasonal changes or commemoration of the dead, and attempting to infringe on that would be met with accusations of neoimperialism. By swapping context for commercialization in the case of Halloween, the U.S. has ironically created a strong and easily-transferable cultural product.

That is not to say that Halloween is the ideal soft power export. The holiday is not without controversy even in the United States, with routine clashes over cultural appropriation in the costume industry to staunch opposition by some religious groups against the entire celebration. Abroad, the same problems exist, and can be compounded by accusations of hedonism and fears over cultural erosion in the face of U.S. influences. But the sheer breadth of American Halloween culture almost guarantees that there will be something for foreign audiences to latch on to and make their own, whether it’s the costume element, haunted houses or even the pumpkin spice craze.

It is precisely the syncretism of Halloween that represents the best of America. Despite the anxieties present in society and amplified in the media—ranging from community polarization to violent crime to the erosion of traditional ways—Americans will still take their children door-to-door for neighbors to dole out treats in a sign of trust. They will purposely seek out moments of terror through haunted hayrides or horror films. They will constantly innovate and build on old traditions to celebrate the here and now. For a holiday that prides itself on all things spooky, Halloween is successful both within the U.S. and as an American export because it is, at the core, predicated on friendliness, openness, and multiculturalism.