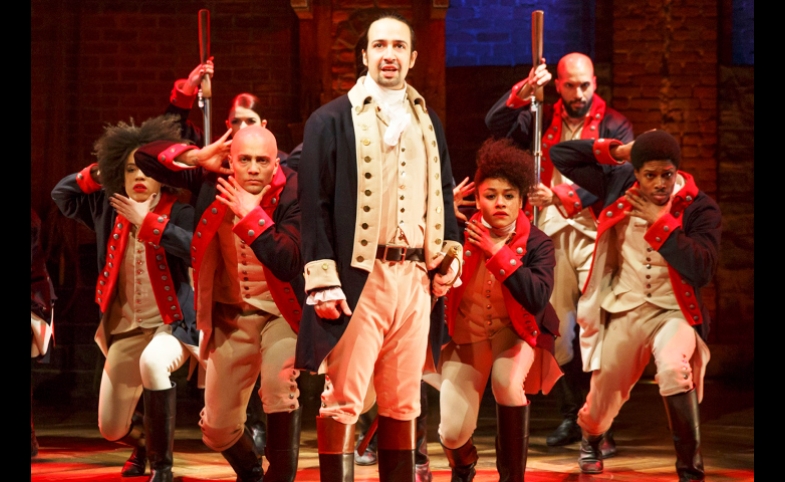 The performance by the cast of Hamilton: An American Musical at the 2016 Grammys was just the latest in the musical’s path to world stardom. Since its Broadway debut in 2015, shows have been booked solid, and still are. The cast album reached the top spot on the Billboard rap charts. Celebrities from Beyoncé to Daniel Radcliffe have called it “revolutionary.” Dick Cheney reportedly loved it. The Obamas have seen it. The Clintons have seen it. Joe Biden’s gone twice.

The hip-hop musical based on the life of Founding Father Alexander Hamilton got its start with playwright Lin-Manuel Miranda’s 2009 performance of the then-in-the-works “Hamilton Mixtape” at the White House and has evolved into a global phenomenon. The musical has been examined at length through the lenses of racial justice, feminism, queer theory—and now I intend to look at it from a public diplomacy angle.

Hamilton isn’t the first musical to make waves abroad. Broadway has, since its inception, served as an easily exportable form of American cultural diplomacy; all the more effective due to its tendency to portray crises of national consciousness. From a racially skewed justice system in The Scottsboro Boys, to miscegenation laws in South Pacific, to homophobia amidst the HIV/AIDS crisis in RENT, Broadway has provided a snapshot of America—and more often than not, criticism of it. In this way, Broadway musicals might vary in popularity abroad, but they all carry authenticity in the minds of foreign audiences, who look to them to understand the American psyche. National values and dilemmas alike are embedded in each show, wrapped up in a highly palatable and outwardly-innocuous musical format.

What’s more, Broadway shows today are more accessible than ever for foreign audiences, not merely due to increased tourism, but through TV and film adaptations, regional and amateur productions, cast albums, and online recordings—both legitimate and bootlegged. Much like Hollywood blockbusters, American musicals are able to proliferate because any implicit message is always secondary to entertainment. A three-hour musical is easier to take in than literature, more authentic and entertaining than government broadcasting, and more given to local adaptations and excerpts than American films. Thus, while Broadway admittedly has its limitations in socializing foreign publics due to presenting a somewhat simplified America, the socio-political implications seep in and nonetheless display a complex, engaging image of the United States.

In a time of uncertain power shifts in a changing global order, Hamilton quietly asserts America’s best qualities without glossing over the worst, sending a message of optimism about the country’s future. It thus has the potential to further American ideological appeal among foreign audiences.

The show functions both as a continuation of American star power and a rebranding of the American image through cultural diplomacy. It is a typical megamusical—flashing lights, elaborate staging, strong choral harmonies, and infectious songs. Miranda’s use of uniquely American musical styles, primarily rap, hip-hop, and jazz, also makes for easy distribution of his story. But beyond the artistic appeal, the musical strives to rebrand the U.S.—as the underdog rather than the hegemon, the band of insurgents rather than a traditional military, the government who came to power on populism and chose to step down so that democracy could flourish. This is accomplished in various ways. For instance, although it was done primarily for domestic audiences, Miranda’s decision to cast people of color for every character but King George III resonates in the current global climate of large-scale demographic shifts and the renewed debate around migrants. The various dimensions of the American Revolution—the disaffected youth, the socio-economic tensions, the inner politics of prominent families, the cognitive dissonance of fighting for independence while owning slaves—are all given equal weight. Miranda doesn’t shy away from showing the messy aftermath of independence either; dramatizing the emergence of partisan divides, personal jealousies, regional rivalries, and mudslinging in the media.

In addition, the libretto emphasizes America’s divergence from its founding ideals and the shortcomings of the Revolution, a purposeful sign of humility and acknowledgement of a long way to go that finds eager audiences overseas. Hamilton is particularly effective at rebranding America because it presents the country’s history as a generic one: a revolution fraught by fractionalization and unclear direction immediately after victory—the same situation felt by many movements abroad. It makes a self-described exceptional nation relatable.

At the same time, the musical does strive to show America’s unique path. Miranda stresses that the country is not inherently great or blessed, but nonetheless special for what it has inspired and allowed its people to achieve. In Hamilton’s final moments, he reflects on the country that simultaneously empowered him and rejected him; that let him rise on merit alone yet shamed him for his immigrant status. And he finds that, despite everything, it was worth it:

What is a legacy?/
It’s planting seeds in a garden you never get to see/
I wrote some notes at the beginning of a song someone will sing for me/
America/
You great unfinished symphony/
You sent for me/
You let me make a difference/
A place where even orphan immigrants/
Can leave their fingerprints

In a time of uncertain power shifts in a changing global order, Hamilton quietly asserts America’s best qualities without glossing over the worst, sending a message of optimism about the country’s future. It thus has the potential to further American ideological appeal among foreign audiences.

We are experiencing a unique moment in American social history, on top of the shift in global governance. Broadway is simply one of many media platforms reflecting this. But—to quote Hamilton one last time—this is not a moment, it’s a movement. Already, the musical has prompted discussion on the legacies of the Founders and their accuracy; on early abolitionist movements and the retroactive defense of slavery as being merely a product of its time; and on the role of women in the new republic and their forgotten contributions. In short, this musical is challenging how America sees itself, and how it thus presents itself to the world. And it can do so much more, given the time. Hamilton has the potential to be a driver of the shift in American international image, not simply a reaction to it. Foreign and domestic publics alike are discussing it, bonding over it, and spreading its reach ever-farther.

The Hamilton Mixtape and American Image

A year after the hip-hop musical Hamilton broke records to become a worldwide phenomenon and vessel for American soft power, playwright Lin-Manuel Miranda has partnered with Questlove, of the band The Roots, to release The...