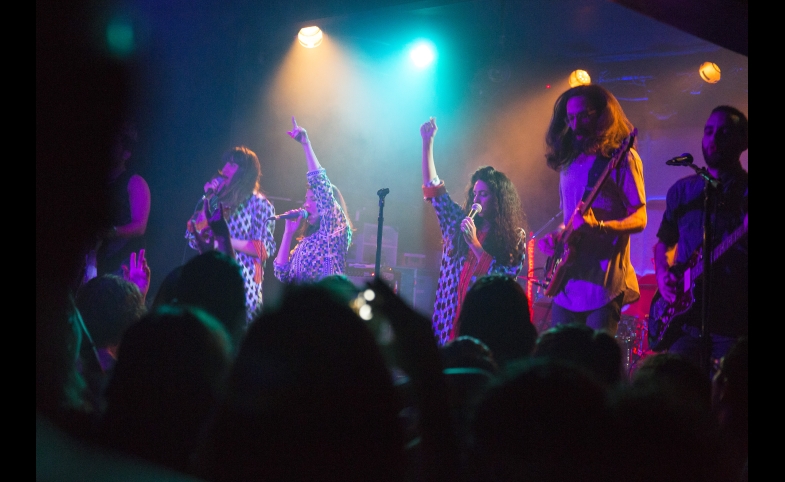 Note from the CPD Blog Manager: The author serves as Assistant Director for the NuRoots Community Fellowship, the program that facilitated the A-WA show at The Echo.

As the lights dimmed in The Echo, and the spirited and distinct beats began to pulse, people started nodding heads and swaying arms—and it was easy to forget a lot of the ugliness in the world: talk of building walls to keep out foreign neighbors, civil wars, citizen bombings. This was just 300 sweaty people on a recent Wednesday night, discovering a new band, a new sound, moving inches from strangers.

This was the first Los Angeles concert for A-WA, a band of three raven-haired Israeli sisters—Tair, Liron, and Tagel—who combine Yemeni folk songs with electronic dance music, also drawing on global, hip-hop, and reggae influences. The sisters manage to separate the obvious with ease, and like the country of Israel itself, they bring in the old and the new with every beat of the music; wearing long, traditional blue and orange dresses with wild hair and kohl-lined eyes; singing in a mixture of English, Hebrew, and Yemeni Arabic; referencing the Yemeni oral traditions of their grandmothers and great-grandmothers while also remaining proudly Israeli.

Though the term “musical diplomacy” was not so much as whispered at this special LA show, the concert was a perfect example of how music can bring different cultures together in one space, and promote understanding between diverse communities. The evening, which was supported by LA-based program NuRoots, was an opportunity for concert-goers to think about their own roots and identities, while also increasing understanding about other countries, communities, and people. And while even the members of A-WA often shy away from the role of cultural ambassadors, I don’t think the impact of such events should be understated. 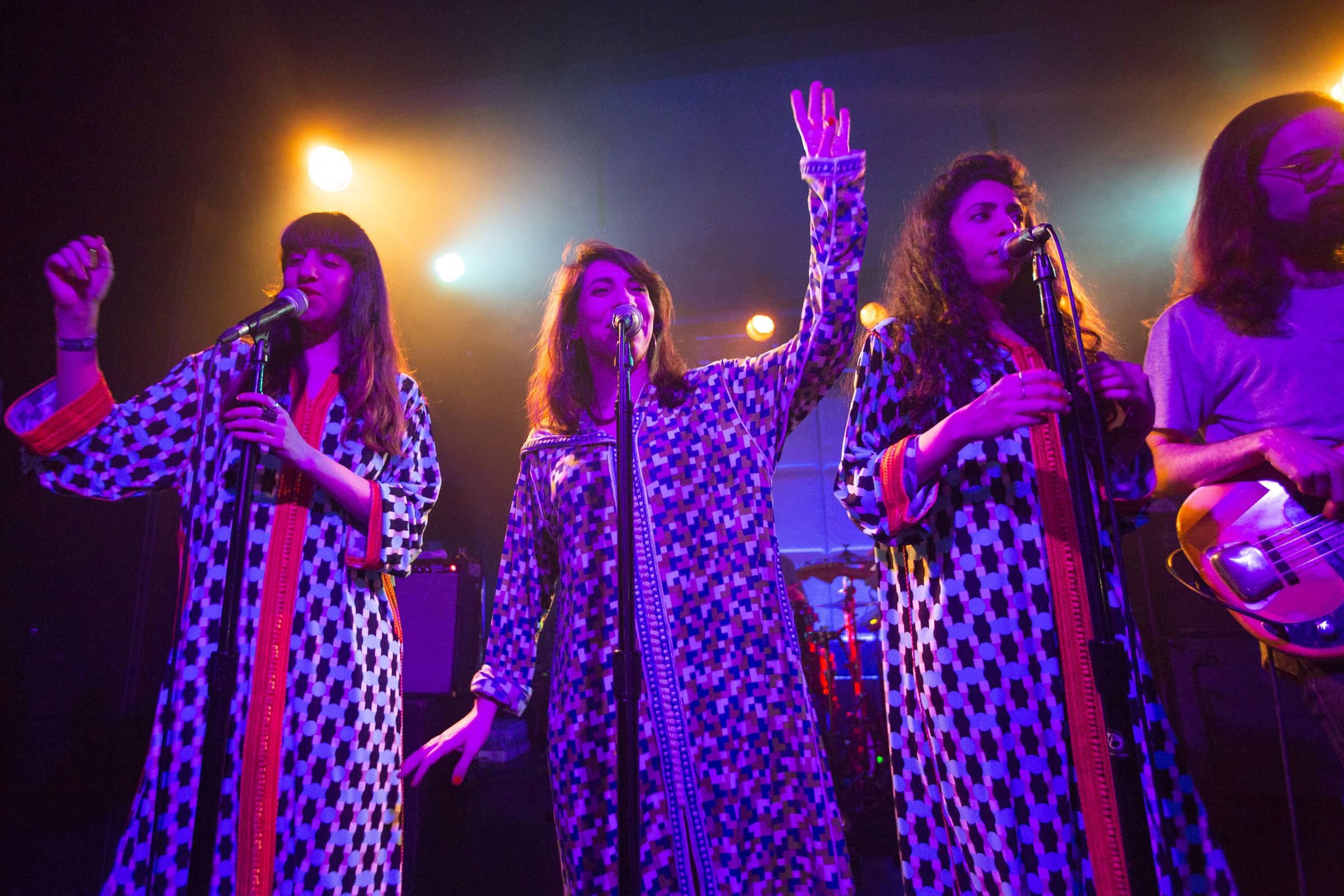 Many of the attendees I spoke with knew little about Yemen beyond its current conflict, and the Executive Director of the Yemen Peace Project (who was there to interview the band for an upcoming podcast) told me that attending Yemeni cultural events like the concert is the twenty percent of his job that is pure fun. “The rest can be really depressing,” he shared. Hearing more diverse narratives out of areas of conflict is important, and A-WA does a wonderful job onstage of sharing how they discovered their ancestral Yemeni folk songs and the way Yemeni women pass down these oral traditions.

“I loved when they introduced songs with a story,” said Kira Shewfelt, who attended the show. “It reminded me how much music is about storytelling, and the most inviting parts of cultural exchange.”

Beyond that, concert attendees were encouraged to share their own stories and personal histories—upon walking into The Echo’s back bar area, a giant world map was available for people to pinpoint their family’s national roots. By the end of the evening, the map was a mural of colored stickers, as Angelenos were overheard telling familial migration stories from West Africa, Eastern Europe, the Middle East, and beyond. On that local level, the show was a reminder that events like this can even promote diversity amongst one population. Dalia Safaradi, another concert-goer, admitted that she’s often concerned about segregation in the Jewish community of Los Angeles, but that this concert attracted a wide range of Jewish Angelenos. “I’ve wanted [more shared spaces] for Ashkenazi, Sephardic, and Mizrahi Jews. I think since A-WA is from Israel, it helped attract Jews from all across the board.” Safaradi, who is Persian, said she was able to connect with other Jews of Middle Eastern descent at the concert, and felt an “instant connection” with the Yemeni melodies.

And that’s part of the magic, too. A-WA is clearly a special group, re-defining what it means to be female, Middle Eastern artists—and doing so with honeyed voices and gutsy beats. To say the music is infectious would be an understatement; it’s lively and fun, and the girls embody that spirit as well. This is clearly not an idea cooked up in a dimly-lit room at the State Department, but an authentic and complex expression of identity and history. 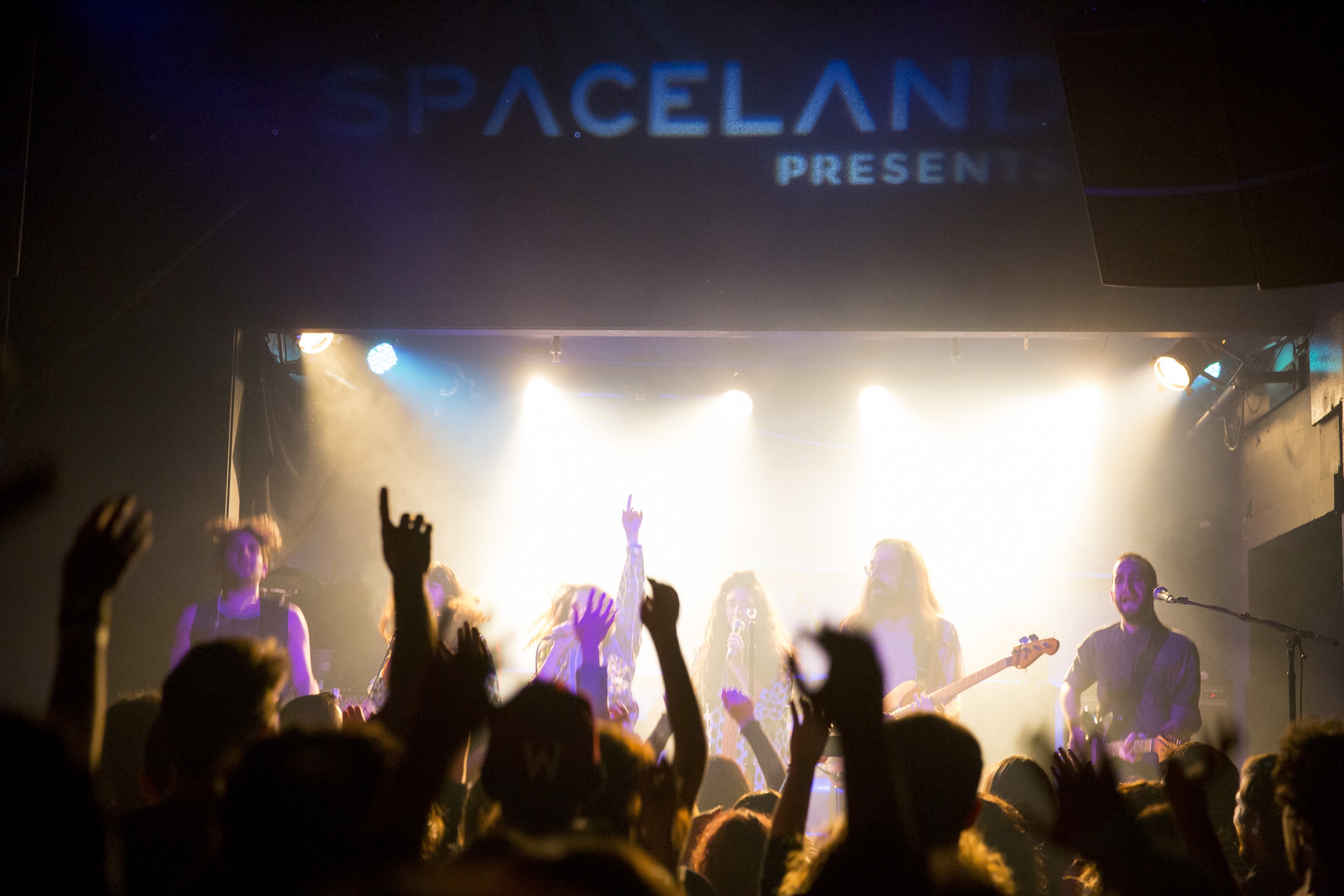 “I think a lot of people see [our music] as a statement,” said Tair in an interview before the show.

“And in a way, it is,” admitted Liron. “We are three women on a stage singing in Arabic.”

An Israeli band with fans and followers in the Arab world—Egypt, the UAE, Yemen—is nothing to be sneezed at, to be sure. “The fact that an Al Jazeera crew came to us and wanted to interview us…that’s not something we take for granted,” said Tair. And they view this development as “a good thing. The music is spreading.”

Whether willingly or not, A-WA is navigating complicated roads, fraught with cultural, religious, and national tensions. But they also seem to be on the verge of something big, jetting off to South by Southwest the morning after the show, preparing to release their first full-length album. And if this evening is any indication, two hours of exhilarated sweaty dancing may be enough to overcome so many cultural differences.

“Middle Eastern music [like this] is very much a part of a communal gathering tradition, which I love,” said Shewfelt.  “It's music to dance to in a circle. And tonight it was beautiful to see The Echo transformed from other times I've been there—by the energy of the musicians and audience.  I like the venue always, but this had a much lighter spirit. It was free and fraternal.”

This piece was co-authored with Monica Chellam.  Discussions on anti-Americanism usually draw on polls such as the Pew Global Attitudes Survey, which measures what percentage of people in a given country see the...