Home|Languages - Getting to the Hearts 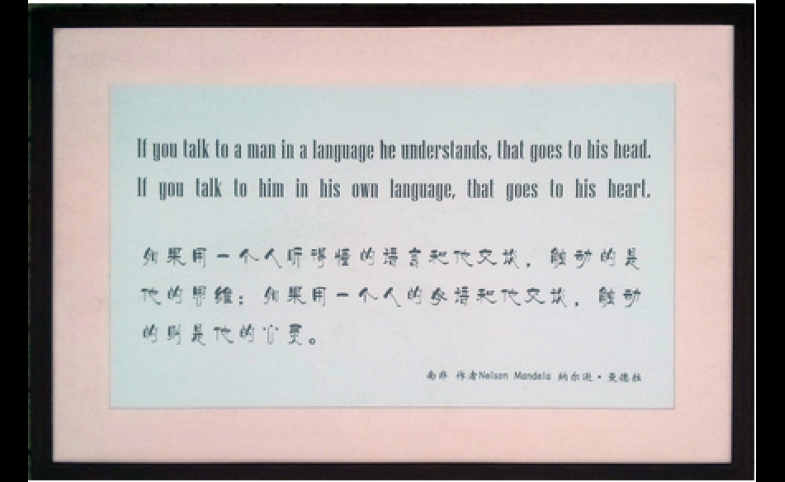 I read that quote on a poster on the wall at the Beijing Language and Cultural University on a smoggy morning this September – BLCU is one of the British Council’s longest standing and biggest partners in China. Nearly 1,000 Chinese youngsters were taking their British Council IELTs English exams -- in one sitting, in that one building, that very morning.

I used it in my foreword to a much covered report the British Council has produced, which sets out the languages the UK most needs for its future. The good news is that this has sparked a real conversation about languages in the UK. UK Prime Minister David Cameron took up the cudgels for us on exactly this theme –- quoting Mandela -- on his visit to China just the other day.

The British think of ourselves as tongue-tied, but in fact the UK's rich linguistic diversity should be one of our greatest assets. Over 200 foreign languages are spoken in London and Manchester alone. And around one in six schoolchildren in England speak a language other than English as their mother tongue -- so there is a great stock and variety of foreign languages to build on.

But the problem is that the great majority of British people feel unable to hold a conversation in any of the languages the UK most needs for its future: Spanish, Arabic, French, Mandarin Chinese, German, Portuguese, Italian, Russian, Turkish, and Japanese. Even the languages (French and to a lesser extent Spanish and German) we’ve always taught in schools are only confidently spoken by a fraction of the population. And the number of people who can speak the languages of many of the countries that are becoming more and more important to the UK is tiny.

This has to mean we are missing out –- great opportunities for international trade, cultural exchange, and advancing international understanding are getting lost in translation every single day. But if we could harness and grow the UK's linguistic wealth, we would improve our prosperity and security, as well as improving social inclusion and intercultural understanding here at home.

And if that isn’t enough incentive, languages are investments for all ages, with increasing scientific evidence that learning languages improves cognition and helps ward off dementia. Everyone, at every age, is a winner if they get to learn languages. Which is important, because in a multipolar world we need to shatter once and for all our national myth that speaking English alone is enough.

I’d like to help get the message across to language learners, young and old, that fluency and pure academic achievement aren’t the only yardstick, that functional use of a language or even a few words can be valuable -- and real fun.

Two of the biggest challenges in the modern world are that there are not enough people getting the chance to learn English, and also that too many people speak only English.

Nobody does more worldwide than the British Council to share the English language. But we need to remember the wisdom of Nelson Mandela and recognize that English alone is not enough, if we want to speak to the hearts of people beyond our shores.