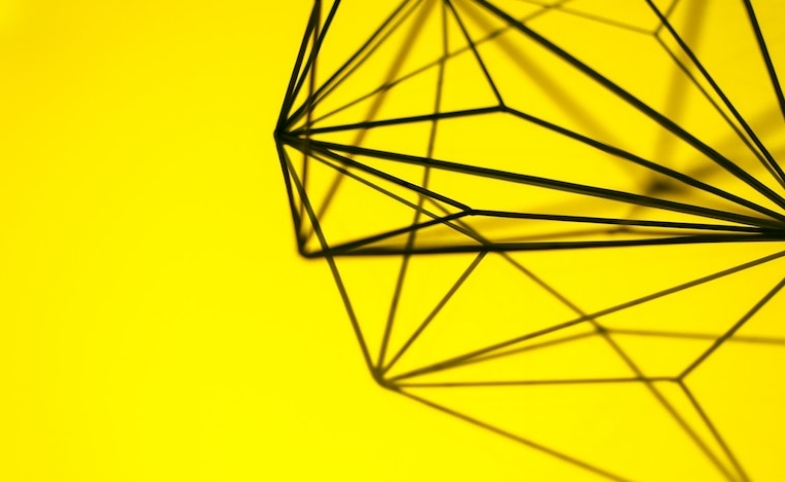 The UK’s Culture White Paper of 2016 sets the Government’s priority and agenda around culture and soft power:

“Culture continues to expand the UK’s influence, promotes trade and investment and attracts visitors to experience the beauty of our landscapes, the treasures of our national heritage and the life of our towns and cities. This respect and influence give us status in global networks and international organizations. In turn, those networks give us the opportunity to promote our cultural and creative talent.”

Arts practice by its nature is already highly collaborative and increasingly interdisciplinary. Meaningful partnerships and collaborations across borders are already a hallmark of the UK’s creative endeavors and thus a major soft power asset. The partnerships created through arts and culture strengthen bilateral relationships and offer an accessible connection point for emerging relationships, shared knowledge and exchange. The resulting shared stories enable reciprocal understanding and appreciation. Connections built through artistic and cultural exchange are vital to establishing trust and build credibility through authenticity and collaboration.

The wider value of arts showcasing to soft power is through its reach to the wider public and supporting an increased understanding of the UK beyond the arts sector. The British Council’s international seasons aims to help build a modern, vibrant and creative image among people in fast-growing economies, encouraging more trade, investment and tourism. Through research, commissioned by the British Council and undertaken by BOP Consulting in the UK, we have developed a casual “chain map” for our arts showcasing, exploring its core ingredients and links through to emerging soft power outcomes. 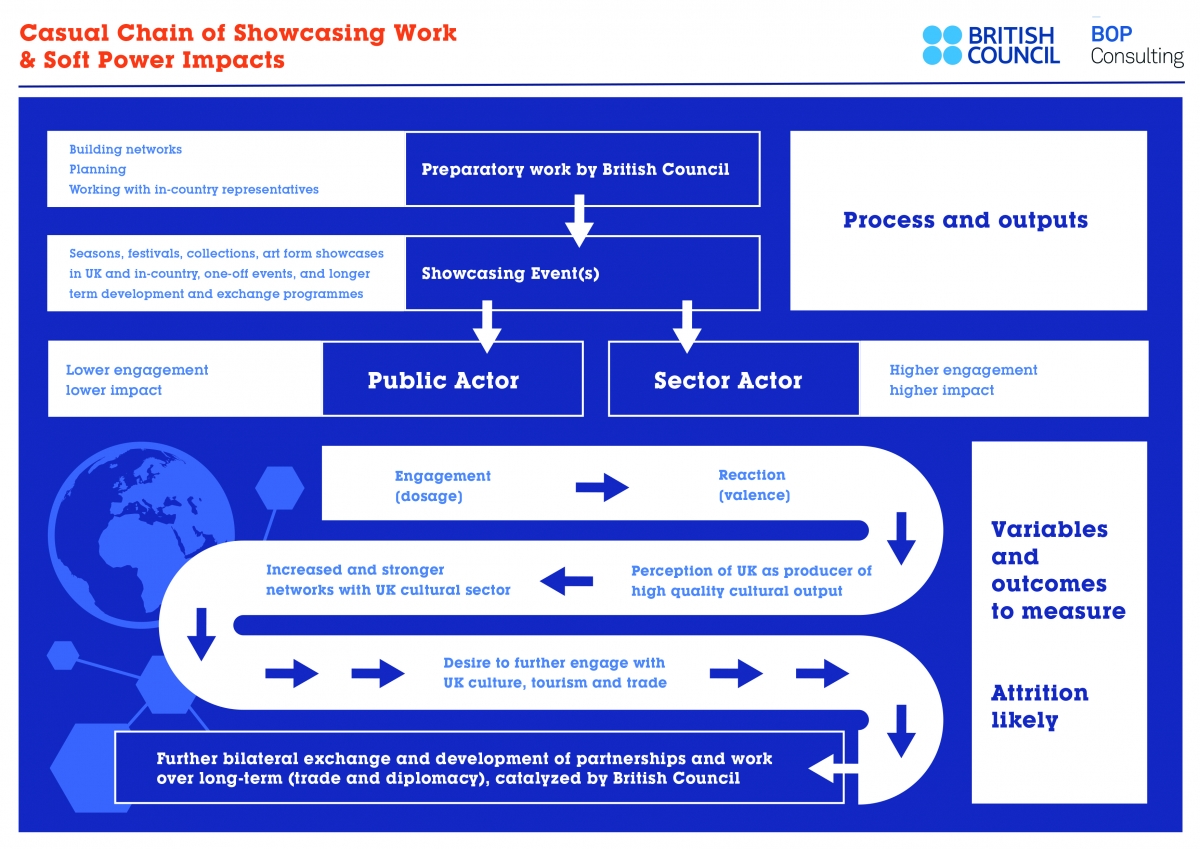 As part of the same Arts Showcasing Research, BOP undertook an external evidence review of previous British Council showcasing evaluations, undertook an international survey of cultural professionals, and interviewed strategic stakeholders during 2018. 91 percent of survey respondents agreed that the Arts Showcasing programs provide an opportunity for the UK to explore its cultural values with the rest of the world and enables us to engage in a values debate with countries and societies, including through programs such as 5 Films for Freedom. The survey of cultural professionals who have engaged with the British Council’s arts showcasing program over the past five years found impacts grouped around: 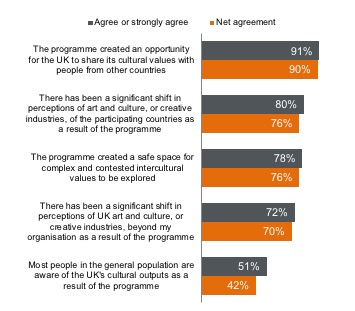 Ultimately the research by BOP found that showcasing activities are effective because “cultural professionals are being strongly linked together into global networks where cultural values are explored, contested and negotiated. Enabling the safety and freedom to do this is a core value of the UK (and many other nations). The UK is therefore considered positively when it is seen to be promoting these networks, opportunities and spaces via the work of the British Council.” 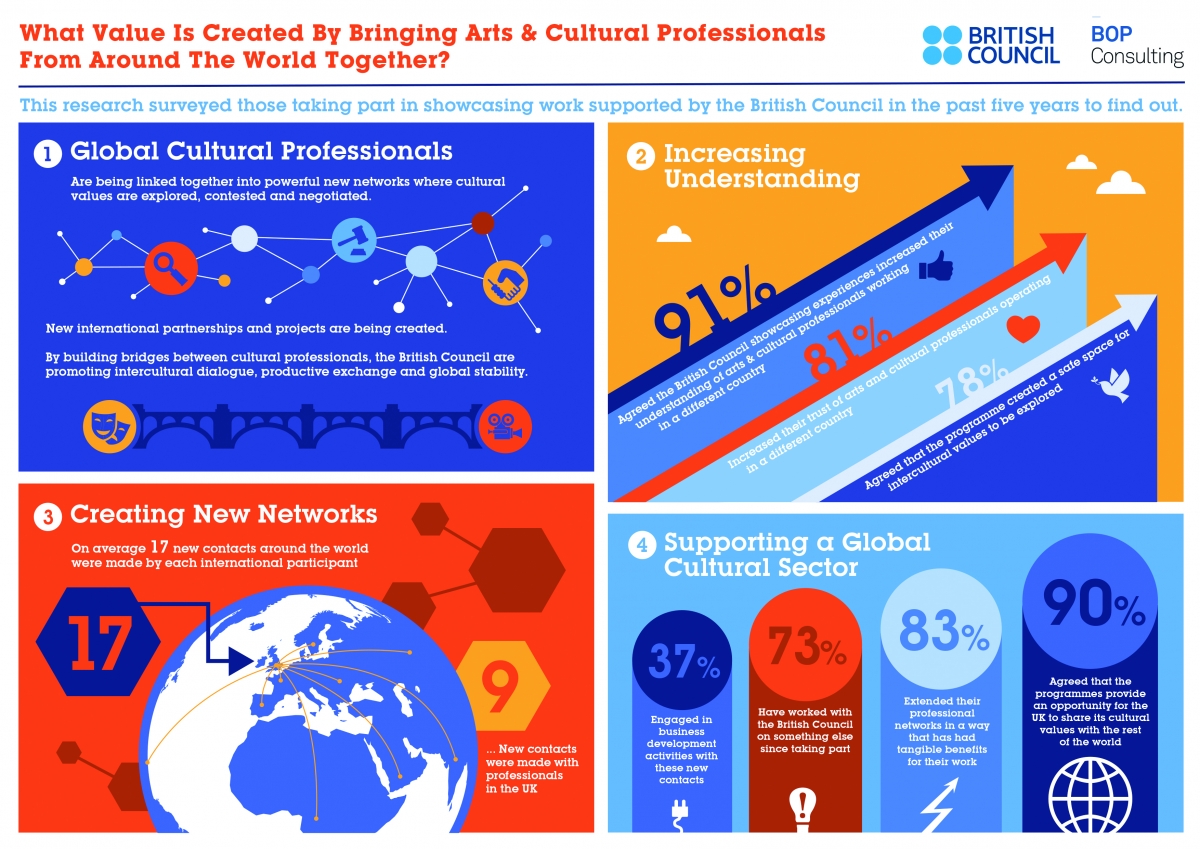 The cultural value project: Cultural relations in societies in transition was a joint research project commissioned by the British Council and the Goethe-Institut (January 2017-May 2019). It aimed to build a better understanding of the value of cultural relations in societies facing difficult challenges—in particular, in Egypt and Ukraine. The project identified the difference cultural relations activities make to important international challenges, including supporting stability and prosperity in societies going through substantial change. It aimed to contribute to current political, policy and academic debates about the role of culture in conflict, diplomacy and development.

The Open University and the Hertie School of Governance brought together different methodological approaches and complementary foci of analysis into one shared analytical framework in order to examine the ways in which cultural relations work and the conditions and contexts under which cultural relations produce value (and indeed where they cannot). The relative strengths of different kinds of cultural relations activities and the value they create in diverse contexts are analyzed via a series of strategically selected case studies.

The Cultural Value Project builds on the strengths of two methods: the Open University’s Cultural Value Model (CVM) and the Hertie School of Governance’s Civil Society Diamond (CSD). By combining these two approaches, the methodological ambition of the Cultural Value Project was to, on the one hand, scale up the Open University’s Cultural Value Model and, on the other, transform the Hertie School’s CSD into a “Cultural Relations Diamond” (CRD). The collaborative synergies provide the Cultural Value Project with a joint analytical and methodological framework to deliver a rich and contextualized picture of the value of cultural relations in these contexts for different stakeholders. This joint methodological design brought into dialogue both approaches, their theoretical underpinnings, and their diverse data sets for the purpose of the analysis to provide an overview of processes, practices and outcomes that shed light on the value of cultural relations in Egypt and Ukraine.

The partnerships created through arts and culture strengthen bilateral relationships and offer an accessible connection point for emerging relationships, shared knowledge and exchange.

Research during 2018 by the Institute for International Cultural Relations at the University of Edinburgh, commissioned by the British Council, was based on statistical regression techniques that sought to identify the variables that are independently related to soft power impacts (as measured by international student numbers, tourism and foreign direct investment (FDI). The findings were showed that the extent of international cultural relations work carried out by organizations, including the British Council, was directly linked to increased FDI and foreign student numbers, and that a high culture ranking is directly linked to “hard power” outcomes such as GDP (although this is a correlational relationship).

“Cultural institutions, like the British Council and Goethe-Instuit, were found to be influential for attracting international students, international tourists and FDI. The more countries that host a cultural institute, the better the return for the parent state. For example, a 1 percent increase in the number of countries a cultural institution from country X covers results in almost 0.66 percent increase in FDI for that country. Finally, a country’s cultural ranking in the world also matters for attracting FDI and for political influence in the world. The impact of a high culture rank is higher than any of the other factors in the models presented for voting in the UN General Assembly—including the hard power of a state’s economic strength as measured in GDP.”

Our emerging evaluation approach, drawing together a range of thinking and research, is based around developing and improving our medium to long-term tracking, building in network and contribution analysis to our evaluation frameworks, bringing together qualitative and quantitative data, exploring and bringing together multiple perspectives and multiple evidence points to triangulate our emerging evidence base. This work includes a current research project exploring how the British Council’s Cultural Protection Fund contributes to a cultural relations approach, which will be reported later this year.