PD News Analysis
For almost a decade, CPD has aggregated news stories and commentary about public diplomacy activities around the world in its PD News (formerly PDiN) section on the website. In 2013, CPD’s aggregation of 1,500 stories came from 546 news outlets and academic blogs that covered public diplomacy topics in the English language alone.

In order to prepare for the 2013 CPD Annual Review, the Center determined the year’s most relevant public diplomacy topics establishing 12 categories under which we could define different types of public diplomacy activities. Each PD News story was collected and categorized under one of these topics (see Figure 3) and coded based on the countries involved in the public diplomacy efforts, either as initiators or recipients. Keywords were assigned to each story to clearly define the scope of the activity. Because there is often significant overlap between categories (for example, a story might touch on both Soft Power and International Broadcasting), we tried to highlight the most important component of the story and classify it under that category.

The data collected in 2013 were analyzed and visualized using various software programs such as Microsoft Office, JMP from SAS, Tableau, Gephi, and other tools, allowing CPD to identify the most utilized public diplomacy tools, most mentioned countries in PD News, and the most cited sources of PD News in 2013.

The CPD staff then reviewed the stories to ensure that the full spectrum of PD content across the broadest geographical regions was represented and that they included cultural, governmental, soft power and non-state activities. An international panel of experts was invited to identify their top 10 choices (Appendix 2). This process resulted in the selection of the Top 10 stories based on votes and comments on each of the top 50 stories from 2013.

The Global Phenomenon of Public Diplomacy
In the report, the 20 most talked about countries do not take into account the countries that were mentioned the same number of times. This list provides more information on six more countries that would tie for the top 20 spots in the CPD Annual Review. In addition, it is important to note that in many instances the European Union was considered a primary actor in public diplomacy, and may account for the lower ranking of some European countries.

PD’s Interactive System
Figure 5 was generated from 800 out of the 1,500 stories. The data set accounted for only the 50 most mentioned actors, with clear identification of the PD actor as initiative and/or receiver.

PD in the Media
Media coverage of public diplomacy activities was concentrated among a few outlets. The top 10 media outlets which generated English-language PD coverage are based in the United States, China, Qatar, and the United Kingdom. At the same time, the top 50 media outlets (representing 10% of total news sources) were more diverse, originating in every region of the globe.

The majority of the coverage came from traditional print and broadcast media. A fraction came from single-subject, web-only media and government websites, such as The Huffington Post, the DipNote blog and U.S. Department of State website, the Take Five Blog, and the Brookings Institution. 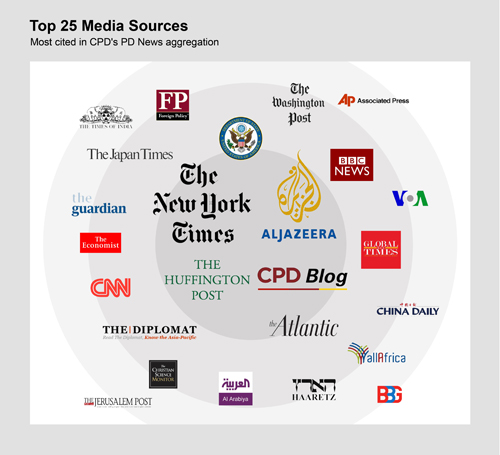 Special thanks to our international public diplomacy experts for taking the time to select their top stories and share their comments. CPD would like to acknowledge the work of Sohaela Amiri, Associate Editor of CPD Monitor, in methodically narrowing our list of 1,500 down to a manageable number to present to our international experts, analyzing data and creating charts and graphs for this report. Additional thanks to Colin Hale, Contributing Researcher, for expertly managing our daily aggregation of PD News. 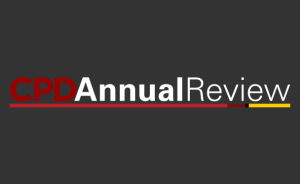