Home|Empowering Women – the Right and Smart Thing to Do

Empowering Women – the Right and Smart Thing to Do

Never before has the issue of gender equality and women’s empowerment garnered the attention that it does today. On television, radio and the Internet, in newspapers, books and magazines, around meals and in political speeches, people are talking about the role of women, whether at home, in the workforce, or in the political arena. In the United States, there has much discussion around the question: Can women have it all? and the responses are just as divided as the votes were in the recent national election.

But while there are differing opinions, there is agreement that times are changing. And this change is driven by committed leaders and activists, social media, and an increasing number of studies that point to one inescapable conclusion: Countries and companies perform better when they promote equal opportunity and women’s full participation.

There is mounting evidence from the World Bank, the United Nations, the Organization for Economic Cooperation and Development (OECD), and the private sector showing that gender equality and women’s participation contribute to increased growth, productivity and good governance.

When men and women enjoy equal opportunities and shared responsibilities, societies can draw on a complete range of talent and skills, and innovation and problem-solving flourish when there is diversity in decision-making.

In 2010, rising popular demand for women’s empowerment and equality led to the creation of UN Women. As the newest agency of the United Nations, UN Women is founded on the realization that women’s full participation as leaders, advocates and agents of change is necessary to achieve the ideals of the United Nations—peace, justice and improved living standards in larger freedom. 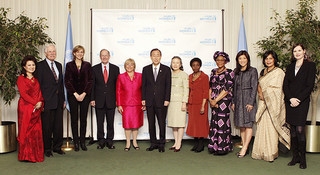 This is the century to end discrimination and violence against women. To succeed, we need strong government action and public diplomacy. Equality depends on each of us. From the government that changes its laws, to the company that advances equal pay and opportunity, to the mother and father that teach their daughter and son that all human beings should be treated equally, we are all part of the solution.

There is a strong role played by civil society partners, who are able to forge alliances, articulate new social concerns, and advance social justice with public support. UN Women relies on systematic consultation with civil society advisory groups and in October, the Global Civil Society Advisory Group was created. This group of 21 experienced civil society leaders with diverse perspectives from around the world can now work more closely via an online platform to exchange good practices and stay connected.

While every human being has the right to take part in the government of his or her country, directly or through freely chosen representatives, too many women are denied the right of equal access to public service, and this is limiting the potential of democracy.

Studies show that when there are more women in legislatures and city councils, they voice the needs of the poor, the vulnerable, children and families and reshape the discussions and agenda. A study of 19 OECD countries from 1970 to 1990 found that women’s representation in parliament was significantly correlated with the strengthening of childcare and parental leave policies.

During these times of economic crises, social upheaval and political transformation, we need to tap into the wisdom and knowledge of both men and women.  It is widely acknowledged that women need a critical mass of representation to make a real difference in decision-making. This critical mass of 30 percent of women in parliament has been achieved by 33 countries and the vast majority of these countries used special temporary measures to reach or exceed this target.

Expanding women’s political participation and leadership requires not only temporary special measures, such as quotas, but also strong public support for women in politics. Today women face gender stereotypes and discrimination that hamper their success in running for office and getting elected. UN Women is supporting measures to remove these barriers.

In India, the constitution stipulates that one-third of seats in village councils, or panchayats, be filled by women. In the world’s largest democracy, there are now more than 1.5 million women on village councils raising their voices and carrying through new initiatives-such as clean water and sanitation-that respond to the demands of women in their villages. Through public support, women candidates have developed effective election campaigns and won election and re-election to such influential positions as village head, or sarpanch, in several states throughout India.

And these women will now be able to share experiences and learn from each other through a new regional online platform that supports women’s leadership. The Regional Centre of Excellence on Gender Responsive Governance, just launched by UN Women, serves as a virtual network and resource center for women leaders in South Asia, especially those at the local level.

In Papua New Guinea, women made history this year when three female candidates won seats in the male-dominated parliament. Two of the successful candidates, including the very first woman to represent her region, participated in the “Know Your Woman Candidate 2012,” which familiarized voters with the candidates through extensive media coverage, raised public awareness of the election, and highlighted female candidates’ political platforms. 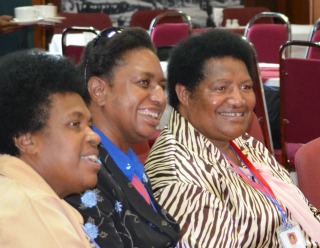 Today more women are engaged in politics and there is growing acknowledgment that the most effective political leadership represents all, not half, of society. By connecting women virtually through online platforms, increasing public awareness of women’s leadership through local campaigns, and creating familiar media personalities for female candidates, women are bringing their political participation into the mainstream.

Another priority that depends on strong public engagement and diplomacy is ending violence against women. UN Women supports activities from advocacy to government partnerships and public awareness campaigns to end this human rights violation.

In Palestine, the first music video to speak out against “honor killings” was recently released by the Palestinian hip-hop group DAM to break the silence. The video is on YouTube and has garnered widespread attention.  The public exposure of music groups, artists and well-known figures standing up against violence against women has made a major contribution to building a culture of saying no. In countries in every region, laws are changing, and rising numbers of women, men and young people are saying no to violence against women.

This year, eight million dollars in grants are supporting 12 local initiatives in 18 countries through the UN trust fund to end violence against women. The social media website Say NO-UNiTE, which profiles efforts underway, has garnered more than five million supporters.

These programs and initiatives illustrate a common aim: to engage the public in finding real and lasting solutions to complex problems facing women and societies worldwide. Through public diplomacy, bolstered by social media, individuals are exercising their right to freedom of opinion and expression, contributing to social and political change. The ideas articulated in the Universal Declaration of Human Rights, the Convention to End All Forms of Discrimination against Women, and the Platform of Action of the Fourth World Women’s Conference in Beijing —to advance the equal rights of men and women—are now spreading faster than ever before.

Today there is greater understanding that women’s empowerment and gender equality are not only goals in their own right. They are critical means to an end—economic and social progress that is just and sustainable.

Author Biography
Ms. Michelle Bachelet is the first Under-Secretary-General and Executive Director of UN Women, which was established on 2 July 2010 by the United Nations General Assembly. UN Women works with the entire UN system, governments, civil society and the private sector to advance women’s empowerment and gender equality worldwide. Ms. Bachelet most recently served as President of Chile from 2006 to 2010. A long-time champion of women’s rights, she has advocated for gender equality and women’s empowerment throughout her career. One of her major successes as President was her decision to save billions of dollars in revenues to spend on pension reform, social protection programs for women and children, and research and development, despite the financial crisis. Other initiatives included tripling the number of free early child-care centres for low-income families and the completion of some 3,500 child-care centers.
She also held ministerial portfolios in the Chilean Government as Minister of Defence and Minister of Health. As Defence Minister, Ms. Bachelet introduced gender policies to improve the conditions of women in the military and police forces. As Minister of Health, she improved primary care facilities with the aim of ensuring better and faster health care response for families.

We have to empower all women in all the countries and if we do this then our national will empower easily. visit- http://topindiafree.com/short-essay-women-empowerment-india/ 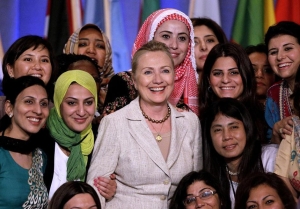