Home|Lessons From the Past: U.S.-Iran Public Diplomacy

The dynamics of the Iran-U.S. relationship after the Islamic Revolution shifted in 1997, when the reformist Khatami became the president of Iran. The overlap of the Khatami and Clinton administrations, however short, opened the way for a number of cultural exchange programs, which enhanced the diplomatic encounters that resulted to a successful collaboration in the fight against the Taliban. Now, nearly two decades later, with Obama and Rouhani in their respective offices, there is another chance for a revamp of diplomatic relations. This time however, if mistakes are not repeated, fears are contained, and objectives are clear, the once-in-a-generation opportunity can be seized to make the change a lasting one. Since Rouhani was elected in June, 2013, both countries have engaged in various forms of public diplomacy to reach out to the other. But can they continue such efforts in a consistent manner and with a long-term strategy that is tied to clear-cut foreign policy goals? Perhaps revisiting history can help identify why public diplomacy initiatives have failed to have long-lasting impact on U.S.-Iran relations in the past, and give clues as to how such issues can be addressed in the future.

The short overlap of Clinton’s and Khatami’s presidencies created an environment in both countries that was more open to seeking alternative, peaceful solutions to mend their strained relations. Khatami proposed the concept of “Dialogue Among Civilizations,” through which he suggested beginning cultural exchanges as a way of reducing tensions and securing peace. In response, the U.S. State Department under Madeleine Albright facilitated exchange programs with Iran, which began in 1998, when the U. S. sent a group of wrestlers to compete in Iran. This was the first time official U.S. representatives had been to Iran in 17 years.

Soon after, the U.S.-based Meridian Cultural Center hosted an Iranian art exhibition that aimed to promote mutual understanding and encourage Iranians and Americans to begin communication through the language of art. “A Breeze from the Gardens of Persia” was a cultural exchange initiative that premiered in Washington, D.C. and went to nine more cities. More than 100,000 people viewed the exhibition and it was covered by major news outlets. The exhibition also received attention at high levels in both countries. As one of the first successful U.S.-Iran cultural diplomacy programs since 1979, “A Breeze from the Gardens of Persia” could have opened the door for many more similar initiatives to follow. Unfortunately, however, this door was closed by changes in U.S. foreign policy after 9/11, particularly after President Bush’s reference to Iran as part of an “Axis of Evil” in his 2002 State of the Union Address. Likewise, the transition of power from the reformists to hardliners in Iran and the presidency of Ahmadinejad only made the situation worse, leaving no hopes for meaningful public diplomacy efforts to be conducted effectively.

In 2002, the direct talks between Iran and U.S. officials begun during Khatami’s presidency were restarted and led to a successful collaboration in fighting their mutual enemy: the Taliban in Afghanistan. There were even plans to collaborate in the fight against Al-Qaeda and the war in Iraq, but these plans were scrapped after the inclusion of Iran in Bush’s “Axis of Evil.” Until 2003, Iran presented successive American presidents with opportunities for rapprochement that were missed—mainly due to the United States’ misunderstanding of Iran’s political system. Khatami’s private offers to the U.S. to discuss all outstanding issues were ignored by the Bush administration for a while, and only responded to in his State of the Union Address.

Now, more than a decade after the first “breeze from Persia” reached the United States, there is another three-year overlap of governments—as in the Clinton-Khatami era—that offers an opportunity for peace which neither country can afford to miss by betraying the trust of the other. The first year of the Rouhani-Obama era has gone well: public diplomacy programs restarted again, ranging from volleyball and Polo tournaments to digital diplomacy efforts. The two presidents spoke on the phone last year, and the Geneva talks on Iran’s nuclear program resulted in a successful temporary agreement. Hopes are high for a permanent deal to be reached in New York this November. But if we are to learn from history, it is crucial to note that cultural diplomacy can have robust and long-lasting results only when it is consistently and systematically integrated into any country’s foreign policy over time. Public diplomacy has to be backed by foreign policies and closely tied to them; otherwise, any positive impact of PD can be crushed by the ill-informed words or actions of politicians.

Additionally, it is crucial to realize that in today’s world, domestic issues can no longer be separated from foreign affairs; they will impact diplomatic relations and in turns public diplomacy efforts. President Obama still faces internal opposition with a divided Congress that is still very cynical about the normalization of the relations with Iran. President Rouhani receives the same kind of antagonism from power-holders in Iran who aim to weaken his position internationally.

Lastly, both sides need to be treated equally and with respect in all their diplomatic encounters in order to succeed in public diplomacy. There needs to be a true dialogue established where both sides are sincerely willing to listen, learn, and be open to change and compromise. Cultural exchanges have proven to be one of the best ways of improving mutual understanding among nations. They can build long-lasting, sustainable trust and respect, eliminate tension, and lead to lasting peace and security. But this will only happen if foreign policy objectives also have the goal of creating peaceful, enduring collaboration. 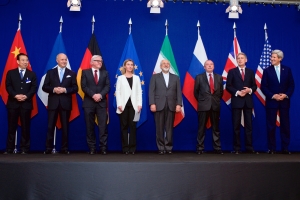